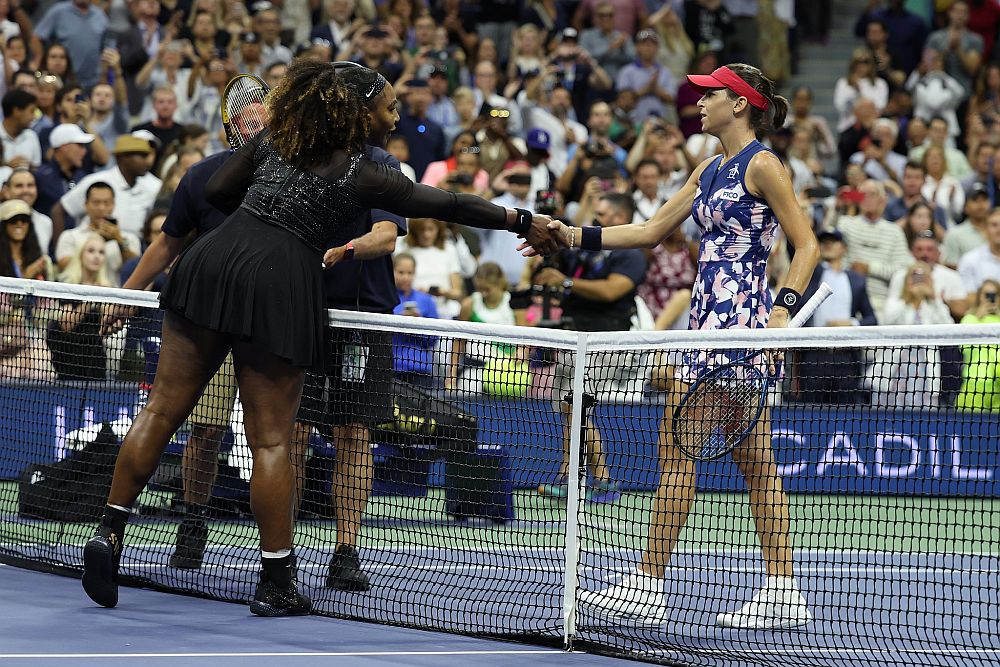 And the day finally came. Serena Williams played her final match in professional tennis during a magic and unforgettable night on Arthur Ashe Stadium in New York losing in a 3-hour, 5-minute classic to Australiana Ajla Tomljanovic with the score of 7-5, 6-7(4), 6-1.

An emotional Williams took the microphone after netting her last forehand and thanked all her team, but especially her parents: “Thank you dad, thank you mom, my parents deserve everything”. And as she was getting emotional, she also addressed the crowd that had relentlessly supported her throughout her last quest for another win saying: “I want to thank every single person who has ever said once ‘Go Serena’ in their life”.

Even without the incredible emotional overload of the historic occasion, the match was a classic, one of the best that women’s tennis has been able to offer since tennis returned from the 2020 hiatus caused by the pandemic. In what was most likely the best performance of her career, Tomljanovic pulled off an unlikely comeback in the first set when, after dropping her serve at 3-4 cracking under the pressure Williams was putting on her second serve, she was able to win four straight games with an 11-2 streak that gave her the first set.

But probably more importantly in the whole economy of the match, it was her comeback in the second set, when after dropping her intensity and being overwhelmed by Serena mounting to a commanding 4-0 lead, she was able to recover the two-break deficit and equalize at 5-5. Tomljanovic held her serve at 2-5 fending off four set points and equalized the score with another 10-2 streak.

However, the tie-break was another masterpiece by Serena Williams, as it turned out the penultimate one of her career, and with a display of full-court aggression, she jumped to a 4-1 lead and closed the set dominating the tie-break by 7-4. But the set that was supposed to be one-way traffic in her favor ended up being a draining 93-minute affair that sucked almost all the energies out of Serena’s body.

When Williams broke Tomljanovic in the opening game, the nth miracle seemed to be on the cards for the American champion, but her legs were all but gone, and Tomljanovic was as cool as she could be in the face of a correct but hostile crowd. With five straight games, she went to serve for the match and a place in the Round of 16 at the 2022 US Open, but Serena Williams stole the stage one more time, one last time, to put a magnificent seal on her tennis legacy. With her legs and movements gone, she let her arm do the talking and some incredible shots erased one after the other the first five match points for Tomljanovic. The Australian player was able to maintain the effectiveness of her serve and make three break points disappear before the sixth match point ended the match and the career of arguably the best player of all time.

“I am feeling sorry, I love Serena as much as you guys – said a very graceful Tomljanovic to a crowd that had supported her opponent for over three hours in any way possible – what she has done for the sport is incredible and I would have never thought I would get to play her in her last match after all the times I have watched her play as a kid. It’s a surreal moment for me”.

In a speaking performance that, if possible, rivals the one she gave with her racquet, Ajla went on describing the match with words that resounded with everyone on the stand: “I thought she would beat me, so pressure wasn’t on me. Even to the last point, I knew that she is in a good position to win even down 5-1.  I lost that 2nd set without doing much wrong, I couldn’t dwell on it or she would run off”.

“She embodies that no dream is too big, and no matter where you come from you can do anything if you believe in yourself, love what you do, and have a good support system around you. I travel with my family too and I looked up to her also from this point of view. The tour will not be the same without her, I will miss her”.

US Open 2022: Serena Williams Hopeful Of Future Tennis Involvement After US Open Defeat