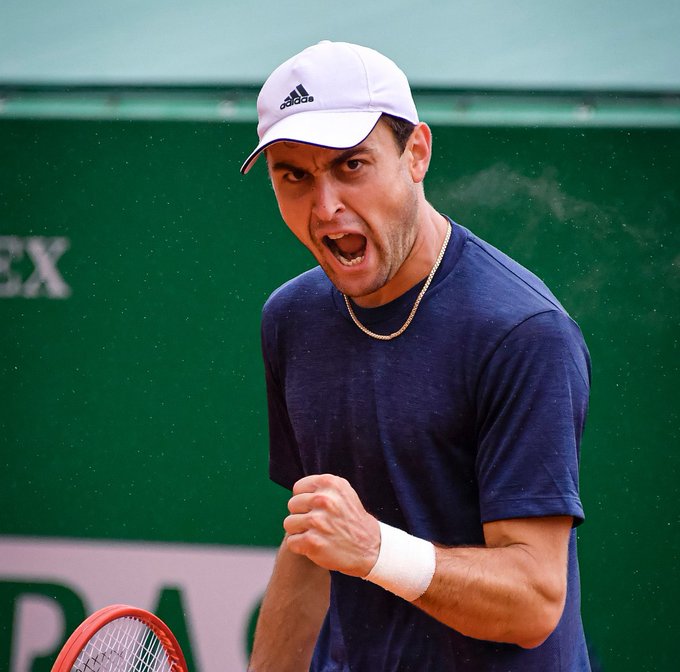 World No.5 Stefanos Tsitsipas will play his first match on clay since reaching last fall’s Roland Garros semifinals, when he lost to Novak Djokovic in five sets.  He will face Aslan Karatsev for the first time, who prevailed over Italian teenager Lorenzo Musetti on Monday.  Two other top 10 seeds, Matteo Berrettini and Roberto Bautista Agut, are also scheduled for their opening matches.

Rain disrupted play for much of the day on Monday, resulting in some matches getting rescheduled for Tuesday.  Yesterday’s preview (here) details many of those matches.  With rain forecast again on Tuesday, it could become challenging to complete the full Order of Play.

Throughout the week, this preview will analyze the most prominent match of the day, and note the other intriguing matchups on the day’s schedule.  Tuesday’s play will begin at 11:00am local time.

Yesterday against Musetti, Karatsev played some stellar service games despite the slow, heavy conditions.  The 27-year-old Russian won 78% of first serve points, and saved all four break points faced.  And Karatsev is now 18-2 on clay at all levels (including qualifying matches) since the tour restart last August.  As impressive as Aslan has been, his resume is overshadowed by that of Tsitsipas.  The 22-year-old’s success on clay is often underappreciated.  Since the start of 2018, he is 37-14 on this surface, with four appearances in tour finals, and a French Open semifinal.  Stefanos should be considered a slight favorite on this day, though first-time meetings are quite unpredictable.  Karatsev has risen over 200 rankings spots in the past eight months, though a victory would break new ground in his career, as he’s 0-2 against top five players thus far.

Roberto Bautista Agut (9) vs. Taylor Fritz – The Spaniard leads the American 4-1, but they’ve split their two meetings on clay.  Bautista Agut is just 12-9 on clay over the last two seasons.  Fritz reached the semifinals of the clay event in Cagliari last week.

Matteo Berrettini (8) vs. Alejandro Davidovich Fokina – the Italian No.1 hasn’t played since injuring his abdomen at the Australian Open.  The 21-year-old Spaniard defeated Alex de Minaur yesterday in straight sets.  These two have never before played.

Jannik Sinner vs. Albert Ramos-Vinolas – Here’s another first-time matchup pitting Italy against Spain.  This will be Sinner’s first match since losing the final in Miami nine days ago.  Ramos-Vinolas is already 9-3 on clay this season, and has reached the semifinals or better of the three clay events he’s played.

Monte-Carlo Masters Monday Preview: Two of the ATP’s Fastest-Rising Stars Meet in the First Round