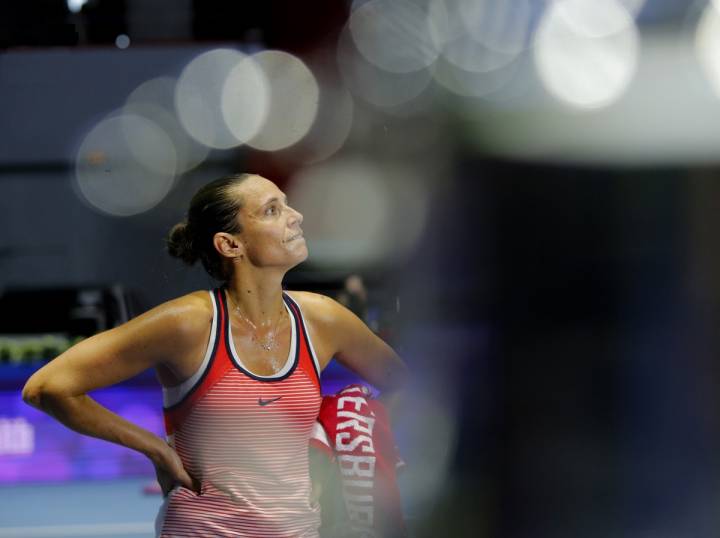 Kai Chen Chang, World Number 153 player, broke serve in the fourth game of the opening set but Vinci broke straight back in the next game. The first set was marked by four consecutive breaks of serve between the fourth and the seventh games. Both players went on serve from then in the 11th game when Vinci got the break to clinch a tight first set.

Chang got the break in the fourth game of the second set but made a series of double faults to drop her serve in the next game. Vinci was broken for the second time on her three service game after leading 40-0 in the sixth game to trail 2-4. Chang broke in the eighth game with a dwon-the-line backhand return to seal the second set 6-2 after 27 minutes.

Vinci made three unforced errors to face the break point in the fourth game, which Chang converted with her cross-court forehand. The Taiwanese player did not face any break points on her serve and broke again in the sixth game before holding her serve to 15 to close out the third set 6-1 after 26 minutes.

“It’s always an honour to play a top-10 player and I really enjoyed the whole match. I told myself after the first set to be more patient, so I slowed everything down, kept more balls in and just played with her. The result came out well. She is very difficult to play because she slices and spins it, and I am very happy I could win the match”, said Chang.

Elina Svitolina, semifinalist in Dubai, swept aside Miyu Kato 6-1 6-1 in 47 minutes. Japanese qualifier Risa Ozaki cruised to a 6-0 6-2 win over Elizaveta Kulichkova to set up a second round match against Svitolina.

“I think she is playing well. She had a good win today and it’s always tough to play a qualifier, because they have had a couple of matches and it’s completely different conditions here than in Doha and Dubai”, said Svitolina.

Eugenie Bouchard Storms Into The Last Eight In Malaysia

British Joy For Johanna Konta and Heather Watson In Monterrey