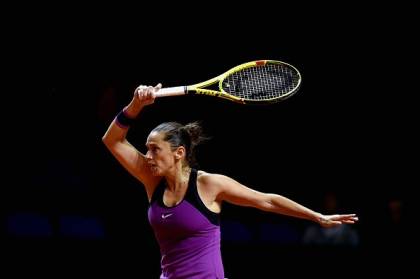 Roberta Vinci edged past Ekaterina Makarova 7-6 (7-3) 4-6 6-4 after a hard-fought match after 2 hours and 23 minutes to reach the second round at the Porsche Indoor Tennis Grand Prix in Stuttgart. Vinci will face a second round match against Julia Goerges who beat Alizé Cornet 6-4 6-0.

Both players traded breaks for four consecutive games. Makarova broke serve in the third game but Vinci broke straight back in the next game. The 2015 US Open finalist saved a break point with her backhand but Makarova took a break lead again in the fifth game. Vinci converted her second break point chance in the sixth game for 3-3 before consolidating her break to 15. Vinci earned three break point chances in the 8th game but Makarova held her serve for 4-4. Makarova did not convert a break point in the ninth game. The first set came down to the tie-break where Vinci raced out to a 5-3 lead before converting her first set point.

Vinci came back from 0-40 down in the first game to break serve in the first game of the second set. Makarova got the break back in the second game for 1-1. Vinci broke again in the third game and consolidated her break to open up a 3-1 lead. Makarova recovered from 15-40 in the sixth game to break serve at deuce to draw level to 3-3. The Russian player got her second consecutive break in the eighth game to win her fourth game in a row for 5-3. Vinci recovered from 0-30 in the ninth game by winning four consecutive points to get one break back for 4-5. Vinci dropped her serve to love as she was serving in the 10th game for 4-6. This was Makarova’s fourth break in the last five service games.

Vinci got the only break of the third set to 15 in the first game of the decider. The Italian never looked back and held her next service games and earned two match points at 40-15 in the 10th game. She sealed the 39-minute third set on her first opportunity with a down the line forehand.