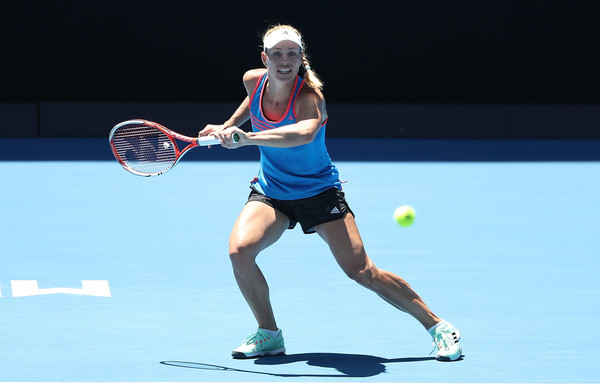 Topping the draw is the World No. 1 Angelique Kerber. Her first round opponent will be Lesia Tsurenko of Ukraine, who is currently playing in the semifinals of Hobart. This means she is in good form, but will also be fatigued for the match. Second round will either be a German derby with Carina Witthoeft or will be faced with a qualifier. Kerber’s third round opponent could be any of 27th seed Irina-Camelia Begu, Yaroslava Shvedova, Viktorija Golubic or Kristyna Pliskova. Any of them could play her, and all of them could give her a hard time. They are hard hitters, and on the right day could pull of the upset over Kerber. The No. 1 has looked very shaky in the first weeks of the season, suffering early losses to Svitolina and Kasatkina. The section from which will come Kerber’s Round of 16 opponent has a lot of potential upsetters for Kerber. 23rd seed Daria Kasatkina, who defeated Kerber in Sydney, Eugenie Bouchard, as well as a blockbuster first round between 15th seed Roberta Vinci and big-serving CoCo Vandeweghe.

Perhaps the biggest threat to Kerber on her way to semifinals can be 7th seed Garbine Muguruza. The Spaniard had a solid start to the year, beating the likes of Stosur, Kasatkina or Kuznetsova in Brisbane, before retiring to Alize Cornet in the semifinals. This put some question marks around Muguruza, but she has been granted an easy first round match against Marina Erakovic. In the second round, she will most probably face Auckland champion Lauren Davis. Third round should again be a bit easier, with 32nd seed Anastasija Sevastova and Christina McHale being the most likely options. Overall a pretty easy intro into Australian Open for Muguruza. Her projected 4th round opponent is her countrywoman Carla Suarez Navarro, seeded 10th. However, she is far from a certain pick for the match. Suarez Navarro starts off against the dangerous Slovak Jana Cepelova, a serial upsetter who has wins over Serena Williams and Garbine Muguruza under her belt. Even if she passes through her second round against Sorana Cirstea, she will be met by one of her difficult 3rd round opponents, Shenzhen finalist Alison Riske, Madison Brengle, who beat Serena at Auckland or 20th seed Shuai Zhang, last year’s quarterfinalist.

4th seed Simona Halep is headlining the second quarter of the draw, and will most likely be the semifinal hurdle for Angelique Kerber. In the Romanian’s way will stand Shelby Rogers in the first round, and Ashleigh Barty or Annika Beck in the second round. Halep hasn’t started her season in the best fashion, falling to Katerina Siniakova in the second round of Shenzhen. Rogers played well so far in 2017, scoring wins over Bouchard, Sevastova and Arruabarrena, and their match should definitely be on upset alert. Halep’s expected 3rd round opponent is Monica Puig, but since her Olympic triumph in early August, the Puerto Rican has won only 4 matches, and has no wins in 2017 so far. It will most likely be here, as Puig will play Patricia-Maria Tig in the first round, also winless in 2017. This slump of other opponents may open the door of opportunity for 16 year-old Destanee Aiava, Australian wildcard who is the first player born in 2000s to play in a Grand Slam. The Australian will start her journey against a qualifier, and then play the winner of the aforementioned match between Puig and Tig. Halep’s potential Round of 16 opponent will either be 19th seed Kiki Bertens or 13th seed Venus Williams, who were both given pretty soft draws until their 3rd round clash.

On the other side of the quarter is 8th seed Svetlana Kuznetsova, who has gone 3-2 so far in 2017, reaching quarterfinals in Brisbane. 26th seed Laura Siegemund, former World No. 1 Jelena Jankovic, Shenzhen champion Katerina Siniakova and Julia Goerges are all going to be competing for one 3rd round spot against Kuznetsova, making it as hard as possible for her to proceed further. 11th seed Elina Svitolina is also gunning for the quarterfinals, with a potentially tricky draw looming ahead. First challenge will be Galina Voskoboeva, who is coming back from her hiatus, and her second round opponent will either be a qualifier or Francesca Schiavone, who is playing her last Australian Open. 3rd round opponent Pavlyuchenkova has also been solid this year, getting wins over Samantha Stosur and Svetlana Kuznetsova in Sydney.

Definitely the hardest section to predict is the third quarter. Starting off the quarter is 6th seed Karolina Pliskova, Brisbane 2017 champion. She will have the challenge of facing the unorthodox Monica Niculescu in the second round, and one of Ostapenko or Putintseva, both very tricky opponents, but the big-serving Czech should get through. 4th round is full of tough players, leading with 22nd seed Daria Gavrilova, who looks to be the most likely to reach the Round of 16. Even though Bacsinszky is the higher seed, she hasn’t played this year yet and is going to play Camila Giorgi. Players like Ana Konjuh and Kristina Mladenovic are going to be there to push the players to the best of their abilities.

Highest seed in the third quarter is 3rd seed Agnieszka Radwanska. The Pole is in great form as she is currently in the final of Sydney facing Johanna Konta. On the way there, Radwanska beat McHale, Duan and Strycova without losing a set. For a player like Radwanska, a very physical and grinding player, one of the keys to Grand Slam success is making sure her matches are short, to not drop sets in the early stages of the tournament, or she will be fatigued and more prone to lose. This is something that will be hard to do, as the World No. 3 kicks-off her Australian Open against Tsvetana Pironkova, to whom she lost at Roland Garros. Follow that with a 3rd round against Alize Cornet and a 4th against Samantha Stosur or Elena Vesnina, and Radwanska will have to put together a series of impressive performances to keep herself in the tournament.

The final quarter is headlined by the odds-on favorite and 2nd seed Serena Williams. The American was slammed with incredibly difficult opening two rounds, starting against Switzerland’s Belinda Bencic. The 19 year-old has a tough season behind her, dropping to No. 48 after she made the Top 10. She has won the most recent match in 2015, when Bencic beat Williams on her way to the biggest title of her career so far in Montreal. Williams’ second round will either be against Yanina Wickmayer, or former No. 5 Lucie Safarova, who also suffered through an injury-ridden 2016, and is looking to redeem herself in the new season. After the 3rd round, the American will have a chance to catch her breath as she was drawn against probably the weakest seed in the tournament, Timea Babos. Other possibilities like Nicole Gibbs or Irina Falconi won’t do much damage either. 4th round will bring a must-watch match for sure with any of the possibilites, from the seeds Barbora Strycova and Caroline Garcia to floaters like Andrea Petkovic or Kateryna Bondarenko.

Serena’s quarterfinal opponent is projected to be 6th seed Dominika Cibulkova. After a great finish to 2016, she will attempt to continue her form into 2017. The Slovak’s draw is pretty soft, with none of Allertova, Knapp or Hsieh being a threat in the two opening rounds. The third round isn’t the worst either, with 30th seed Ekaterina Makarova who is struggling for stability, Sara Errani, Ekaterina Alexandrova and Risa Ozaki. Round of 16 for Cibulkova will be a round of hell, with many different players who can threaten her looming from that section. Most notable is 9th seed Johanna Konta, defending her 2016 semifinal. Konta is in great form in 2017, reached the Sydney final in which she will play Agnieszka Radwanska. 17th seed Caroline Wozniacki and Naomi Osaka could also prevent Cibulkova from reaching quarterfinals, if given the chance.

Australian Open is always the most difficult slam to predict, simply because we don’t have that much data about the players in this year yet, and it takes serious tennis knowledge to be able to predict, yet I will take a crack at it nonetheless.

Rafael Nadal – “Life Is Not Just About Winning”