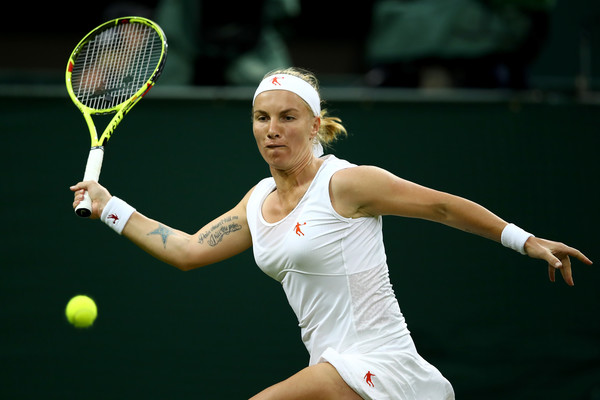 The 6th seed Roberta Vinci was on upset alert in her opening round match against Alison Riske. The No. 1 Italian has not gone past first round at SW19 since 2013, and Alison Riske is a very dangerous opponent on a grass court. Vinci got an early break of 2-0, but Riske broke back for 2-2. The Italian then shifted into another gear and didn’t allow Riske to win another game. The veteran took a lead of 4-2 in the second set as well, but Riske kept on fighting and won the second set 7-5. Riske took a lead of 3-1 in the final set, and Vinci showed her experience and why she is a Top 10 player, winning 5 games in a row and the match, the final scoreline read 6-2 5-7 6-3 for Vinci. The 6th seed Roberta Vinci will next face the Chinese lucky loser Duan Ying Ying.

“I’m try(ing) to play aggressive, try to play my game,” explained Vinci, acknowledging the difficulties in closing out the win. “At the end, I was a little bit nervous. A lot of match point saved. But I’m happy. Finally I won.”

Svetlana Kuznetsova, seeded 13th, had a much more well known opponent. The Russian faced a former World No. 1 Caroline Wozniacki, who after her injuries dropped down to No. 45 in the rankings. The first set was very level between both players and it resulted in Kuznetsova winning 7-5. Kuznetsova continued to use her power and hit through Wozniacki, which rapidly gave her a 4-0 lead in the second set. Kuznetsova was at 5-1, 30-0 in the second set, when Wozniacki won 12 points in a row to make it 4-5. Kuznetsova didn’t flinch and served the match out, 7-5 6-4.

Other seeded players that advanced to the second round today were the 19th seed Dominika Cibulkova, who recently won Eastbourne. The Slovak dealt with Mirjana Lucic-Baroni of Croatia in striaght sets 7-5 6-3. 27th seed Coco Vandeweghe also had a challenging opponent on grass, who was Kateryna Bondarenko. This match played under the Centre Court roof was won by the American 6-2 7-6(3). Caroline Garcia, seeded 30th, was faced with the task of defeating Turkey’s finest Cagla Buyukakcay. She did so in an impressive manner, winning 6-2 6-3.

Four Wimbledon wild cards were in action today as well. Tara Moore was the only one to take advantage of it, as she cruised past Alison Van Uytvanck 6-2 6-3. Daniela Hantuchova, Marina Melnikova and Katie Swan all lost their matches in straight sets.