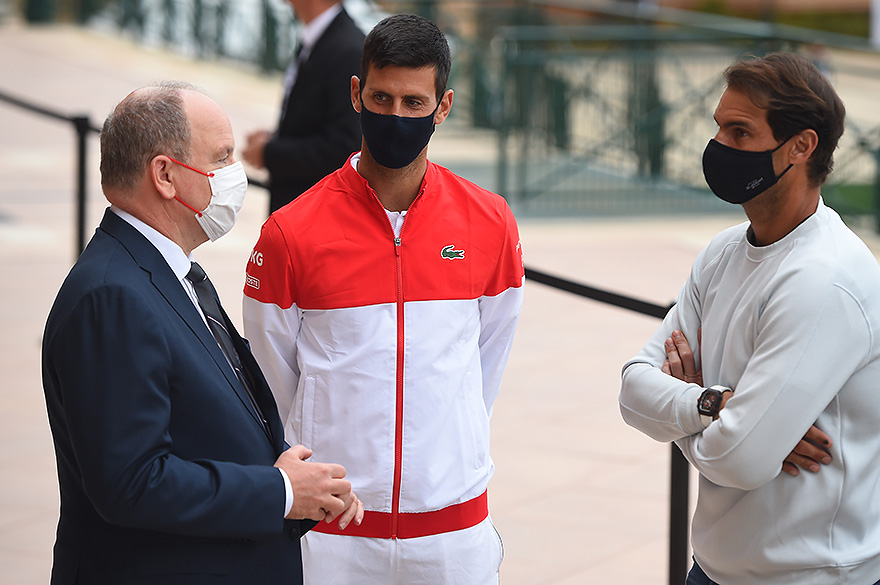 Rafael Nadal and Novak Djokovic, together at a plaque ceremony this past Sunday (montecarlomasters.com)

With Daniil Medvedev withdrawn from the tournament due to a positive COVID test, Djokovic and Nadal are now the top two seeds.  They have combined to win 13 of the last 15 Monte-Carlo Masters titles.  Djokovic will face recent Miami Open finalist Jannik Sinner, while Nadal takes on Federico Delbonis, whose two ATP Titles have both come on clay.

Wednesday’s schedule is filled with intriguing second round matchups, though with rain in the forecast on Wednesday, completing the Order of Play could prove challenging.

Throughout the week, this preview will analyze the most prominent match of the day, and note the other intriguing matchups on the day’s schedule.  Wednesday’s play will begin at 11:00am local time.

This will be the 19-year-old Italian’s first match against the 18-time Major champion.  And this will be Djokovic’s first match since winning his ninth Australian Open, as he chose to skip the Miami Open due to COVID restrictions.  Sinner took advantage of the absence of Djokovic, Nadal, and Federer in Miami to reach his first Masters 1000 final.  That was only his third appearance at this level, and his first outside of Italy.  He’s now at a career-high ranking of 22nd in the world.

Djokovic is a two-time Monte-Carlo champion, but hasn’t won this event since 2015.  Shockingly, he’s just 6-4 since that time.  So Novak could be prone to an upset at an event where he’s struggled in recent years, and in his first match in nearly two months.  And Sinner knows how to beat top players on this surface: he defeated both Stefanos Tsitsipas and Sascha Zverev last season.  But with the French Open on the horizon, I suspect Djokovic will be particularly motivated to get off to a good start this clay season.  After claiming the record for most weeks at No.1 from Roger Federer, he is now focusing all his efforts on preparing for the Majors.  And it would only be normal for Sinner to suffer a bit of a letdown coming off the best week of his career in Miami.

Rafael Nadal (3) vs. Federico Delbonis – Nadal is 71-5 in his career at this event, with 11 titles.  And he’s 4-0 against Delbonis, having claimed all nine sets they’ve contested.

Sascha Zverev (5) vs. Lorenzo Sonego – The 25-year-old Italian was both a singles and doubles champion last week in Cagliari, propelling him inside the top 30 for the first time.  Zverev has only played four matches on clay since July of 2019.

Andrey Rublev (6) vs. Salvatore Caruso (Q) – Rublev went 10-2 during last year’s abbreviated clay court season.  All seven of Caruso’s Challenger and Futures titles have come on this surface.  In their only previous meeting, at last summer’s US Open, Rublev dropped only four games across three sets. Wednesday’s full Order of Play is here.