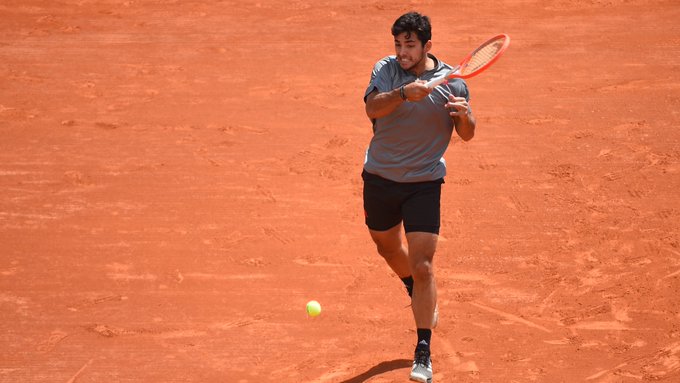 The Chilean is through to the second round after beating his Canadian opponent in straight sets.

Christian Garin the number 16 seed only needed two sets played over two days 7-6 (4) 6-1 to beat the Canadian Felix Auger Aliassime that was delayed yesterday due to rain. The number 16 seed hit 16 winners in the victory while the Montreal native hit 45 unforced errors.

“I didn’t expect to play Felix ( Auger Aliassime) in the first round, he’s a great player with a great future so I’m very happy with the way that I played today so I hope to keep improving, most of the tournaments I played this year were on clay so I hope I can improve my game of tennis”.

The match started on Monday around 5pm local time after most of the day was delayed due to pouring rain and super wet conditions. They finally took to the court and in the opening game the world number 21 who had announced his new coaching partnership with Toni Nadal needed 10 minutes to hold his serve.

The next game the Chilean was struggling as well on serve and double faulted on breakpoint to give the early break. The very next game the number 16 seed had a chance to get the break back but it was denied with one of the Canadian aces.

The world number 21 would consolidate the break and hold serve and we stayed on serve until 4-2 when it started to rain a little harder. The players spent about 5-10 minutes waiting before the match was suspended.

The players were sent back to the locker room and a couple hours later the tournament confirmed they would have to come back on Tuesday finish the match.

The players returned on Tuesday afternoon around 1:30pm local time to a sunny day and better conditions. The Chilean got off to a better start earning a breakpoint in the first game back but the Canadian would save it with a forehand winner and hold serve.

The very next game with the number 16 seed serving to stay in the set he would face two set points but save them both and eventually hold serve. He then went looking for the break and got it sending the match back on serve at 5-4.

At 6-5 the Monte Carlo resident had two more set points but couldn’t convert and the first set would be decided by a tiebreaker. In that breaker the number 16 seed would jump out to a 4-0 lead before the Canadian produced a mini-comeback before the Chilean sealed the tiebreak 7-3.

The momentum was clearly with the Chilean and after holding the opening service game of the second set would have three chances to break and he took the third one to get the first break.

It stayed on serve until 4-1 when the number 16 seed had two more chances to go up a double break and he would just that and serve out the match. He will next face John Milman of Australia who yesterday had to chance to beat the Frenchman John Milman 6-3, 6-3.

In a on court interview after the match he spoke about his next matchup.

“He’s a very solid player, I saw his match earlier today, he played really well, of course he is a dangerous player, every player here plays amazing so I’m very happy so I need to recover”