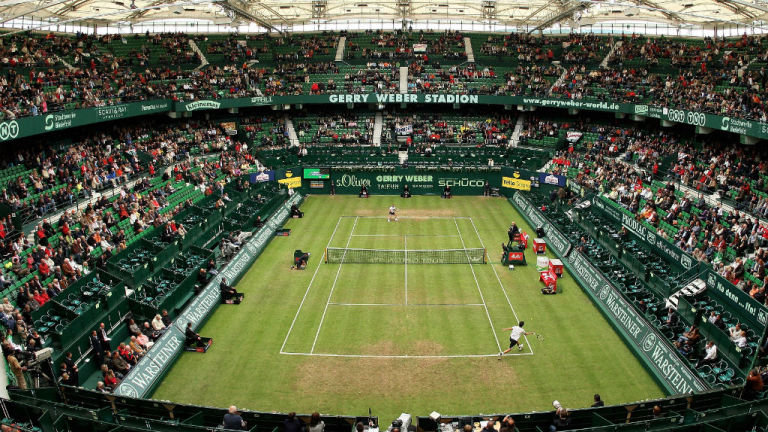 It seems like just yesterday, but in truth it was long ago…

On June 8th, I learned that Noventi had become the title sponsor of the Gerry
Weber Open. The announcement left me with the feeling that a dear friend had
passed. My relationship with the ATP Men’s 500 event, played in Halle, Germany,
as well as that of my wife, Cheryl Jones, who is also a tennis journalist, has always
been, well, to say it simply, matchless. Year after year, (save just a few when the
New York Times sent journalists), we have been the only American writers to
cover the championships.

Tennis history buffs known that the first Gerry Weber Open was played in 1993.
But few aficionados are aware that there are actually three towns called Halle, in
Germany. The tennis Halle, Westfalen to be specific, is a small speck on the map,
in the middle of a rolling countryside that is like an Impressionist’s painting of
agricultural fields and seemingly, yet to be explored forests.

The nearest city of name is Bielefeld. It sets its self apart because though it is
quaint, like Halle, it is bigger. Bigger buildings, more shops and a much bigger
population of over 333,000 compared to a hair more than 20,000 in Halle.

At the 1992 ATP World Championships, I learned that the following year Gerhard
(Gerry) Weber planned to stage a grass court tournament – in Germany, the week
after Roland Garros. To borrow a British colloquialism – I was “gobmacked.”

Why would anyone have the audacity to go up against “an institution” as Queen’s
seemed to be, which was the only “Lead Up” to Wimbledon at the time?

Weber, a trend setting clothing manufacturer for whom the tournament is named,
and his partner, Udo Hardieck took a big chance. Many in the tennis community
believed it was a risk that was similar to panning for gold and finding only gravel.
But, as it turned out, true gold was discovered.

After the inaugural year, in which rain plagued play, the Gerry Weber Stadion, (the
center court), made a startling change. A retractable roof that could be closed in a scant 90 seconds was added. In 1994, the tournament became the first tennis event
not forced to contend with those spring rains that makes the theme of tennis played
in Europe a reprise of “Raindrops keep falling on my head…”

Grass court maintenance requires genius. Annually, Phil Thorn lives up to the
sobriquet. Having learned the “ins and outs” of growing those lawns from his
father, Jim, who was responsible for the grass at Wimbledon for ages. The younger
Thorn has proudly maintained the family tradition. He has developed a superior
grass seed mix that withstands the rigors of closed roof play. He also developed a
palate system on which the grass is grown that is much more than an advanced
scientific marvel and it is remarkable.

To fill the Gerry Weber Stadion surface, four hundred palates are used. When dry,
they weigh around 800 kilos (1764 pounds). Damp, they are almost an American
ton – 2000 pounds.

Over the years, a “Who’s Who” collection of name players have populate the
tournament. But, simply put – Roger Federer is the Gerry Weber Open story. He is
a nine-time champion and has a life-time contract with the event. For the
tournament, that guarantees his annual appearance, and it has been money well
spent.

Unfortunately, Gerry Weber AG has not done well during the past decade. When
the owner was at the top of his game, his company’s fashion designs were eye-
catching and appealing to those looking for affordable couture. Cash filled the
coffers and Gerry Weber AG bought a collections of companies that had sizeable
debt. In recent years, rumors of shaky finances began to be heard, and at the same
time, Weber’s health took a turn. All of these circumstances combined to stagger
an established institution and led to its final financial collapse.

The tremors shook the Halle community to its core. The Gerry Weber Open was
long known as “The People’s Tournament”. It was a real family affair and locals
sacrificed vacation time to volunteer for the event. It was part of their souls and
their care provided an unrivaled “feel” for what took place for twenty-six years.
Cheryl and I have experienced the growth that took place from the beginning and
we have rich recollections, enough to make a very readable book, actually.

We are hopeful that the Halle event will flourish and will add a significant new
chapter, (an amendment, actually), to the passing of the Gerry Weber Open mantle
to an equally motivated Noventi.

Related Topics:ATP 500 Halle
Up Next