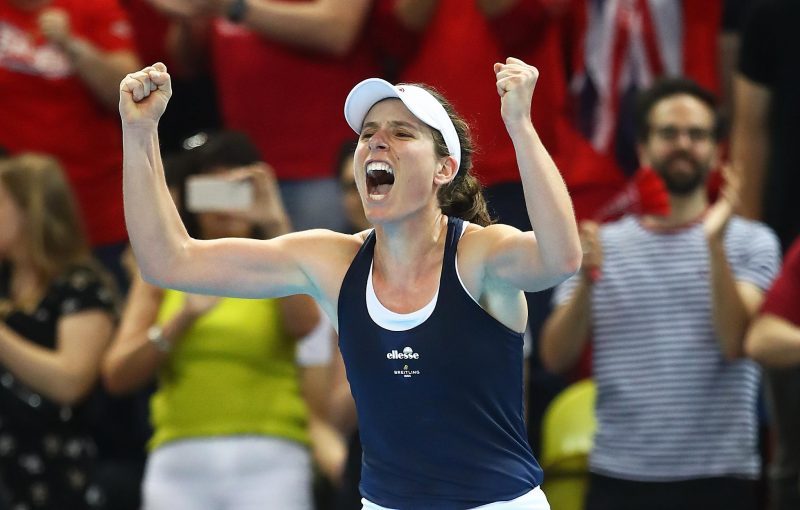 A duo of hard fought singles victories in London has made history for British Tennis after the Fed Cup team defeated Kazakhstan to reach the World Group stage for the first time since 1993.

Tied at 1-1 after the first day, Johanna Konta and Katie Boulter prevailed in both of their matches to hand Great Britain an overall 3-1 win over their opponents. The proceedings were opened up on Sunday by former top 10 player Konta. Taking on Yania Putintseva, Konta battled to an epic 4-6, 6-2, 7-5 victory. After dropping the opening set, she was then forced to recover from a 1-4 deficit in the decider to score the crucial victory. Putintseva, who was struggling physically during the match, is only the fourth top 50 player Konta has defeated so far in 2019.

“As a young girl, as an athlete wanting to make it to the top of my sport… you can only dream of this stuff.” She said during an interview with BT Sport. “Gosh that was one hell of a match wasn’t it?”

Following on from Konta’s heroics, it was Boulter’s chance to seal an unassailable lead for her country in the tie. Boulter wasn’t born until three years after her country was last in the World Group of the Fed Cup. The 22-year-old was out to seek redemption after squandering three match points on Saturday during her loss to Putintseva.

This time round Boulter didn’t crumble when under pressure. Like teammate Konta, she roared back from a set down to defeat Zarina Diyas 6-7(1), 6-4, 6-1. Winning 67% of her first service points and breaking her opponent’s serve six times throughout the match.

“I was trying to get one win for the team, Johanna did a great job, I was just trying to make them proud today,” she told BT Sport.
“I showed yesterday how much it meant, I was so close but today I bounced back and got the win.
“We go again!!”

The triumph comes after what has been years of heartbreak for the British camp. Prior to 2019, they have been on the verge of reaching World Group II of the Fed Cup four times in seven years. Only to lose all of their play-off ties. Making their victory over Kazakhstan even more sweeter.

“Amazing. Just a heroic effort from the players this week, some fantastic tennis.” Team captain Anne Keothavong commented.
“Everyone here has been part of our journey and this has been an unforgettable weekend.
“Jo’s effort. coming back from behind, to Katie today. I think they have inspired a lot of people.”

Besides their new status, the contingent of player’s are hoping that their performances will help inspire the next generation. At present, there are five British players in the top 200 on the WTA Tour. Three of which are under the age of 22 (Boulter, Harriet Dart and Katie Swan).

“I hope that we have inspired a lot of kids here (in London) today to play tennis or do whatever they want to do.” Said team member Heather Watson.

It remains to be seen what is next for the Brits with the possibility of the Fed Cup changing its format. From next year there is a chance that the world group could be turned into a 12-team format. If this happened, Britain is likely to make that group thanks to their latest win.