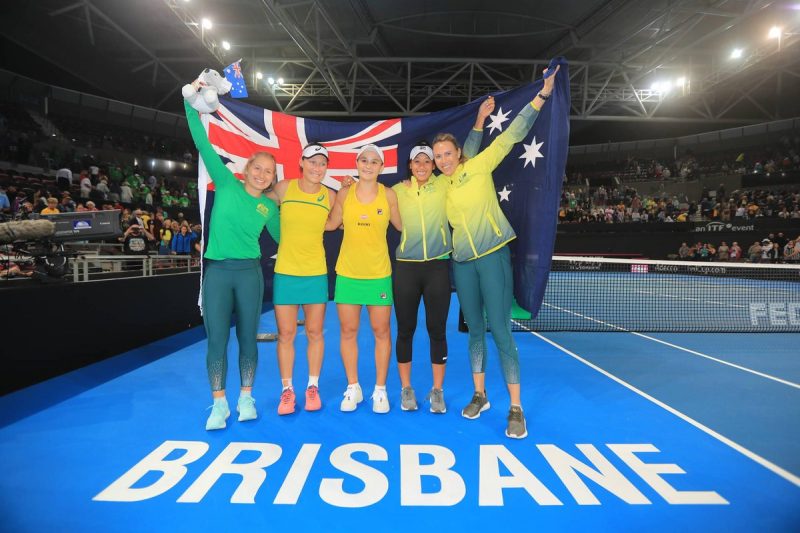 The Australian duo of Ashleigh Barty and Sam Stosur has guided their country into the final of the Fed Cup for the first time since 1993 after a dramatic final day of their clash with Belarus.

Australia, who last won the team competition back in 1974, was pushed to their limits at the Pat Rafter Arena with the final match of the tie deciding their fate. After day one, they were held at 1-1 by Belarus. A team compromising of two-time grand slam champion Victoria Azarenka and world No.10 Aryna Sabalenka.

Barty gave the home favourites an initial 2-1 advantage after she disposed of Sabalenka 6-2, 6-2. A player who she lost to twice during the second half of the 2018 season. However, Azarenka revived Belarus’ chances immediately with an emphatic 6-1, 6-1, win over tour veteran Stosur. Making it her first victory in the competition since 2016.

With all to play for, it was the doubles match that separated the two. During a roller coaster encounter, Barty and Stosur prevailed 7-5, 3-6, 6-2, over their rivals. Breaking twice in the decider on route to securing the overall 3-2 victory.

“It’s just super-exciting now to be in the Fed Cup final,” Stosur told fedcup.com afterwards. “All the girls, we work so hard throughout the year, and we really stick together as a team, Fed Cup weeks or not Fed Cup weeks. We’ve always got each others back, so to be in the Fed Cup final not I think a great reward for both of us, and we’re going to give it our best shot here in November.”

Team captain Alicia Molik has hailed the performance of her team. This year was the first time Australia has contested a semi-final of the competition since 2014. The country ranks third on the all-time list for more trophies won, but have failed to gain success in recent decades.

“It was just an incredible weekend,” Australian captain Molik reflected.
“We hadn’t exactly planned for it to come to the doubles, yet we were prepared. We got to that position, and I was really pleased today with both the outputs of Ash – it was phenomenal tennis out there – and Sam gave it her best.
“You can just see the joy in our faces too – winning that doubles rubber, what it means. We’re now in the final. I’m just so proud.”

In November’s final Australia will play either France or Romania.