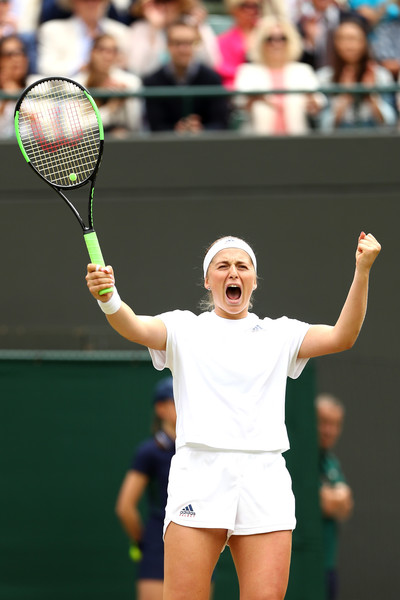 No. 12 seed Jelena Ostapenko produced a crisp display on a big stage in the quarterfinals on Tuesday, dispatching Dominika Cibulkova 7-5, 6-4 to make her first semifinal on the London grass and continuing her quest for a second grand slam title.

Last year’s French Open champion displayed plenty of her trademark power and shotmaking, blasting 32 winners to just six for the unseeded Cibulkova. Ostapenko had twice as many errors as her opponent, but had a positive winner-error ratio while the Slovak did not.

She shined in the final games of each set, raising her level and putting Cibulkova away with relative ease to set up a Thursday semifinal with No. 11 seed Angelique Kerber.

“It was a very tough match but I was just trying to enjoy it,” Ostapenko told the BBC. “I’m fighting until the end and it helps me, and I gain even more confidence with [the fight].”

That was especially evident in the first set, when Ostapenko controlled Cibulkova’s service game at 5-5, jumping ahead 0-30 with a double fault, then hammering two big groundstrokes — first a forehand, then a backhand — off second serves that gave her a late edge. She served out the set in style at love, capped by an ace called by the chair umpire.

Ostapenko won the last nine points of the set and 12 of the final 13. That dominant stretch came after an uneven start, when the two traded four breaks in the first five games. The Latvian had six break points in the opening game before finally converting, then immediately lost her serve at love as Cibulkova matched her unbridled power.

The second set began in similar fashion. Ostapenko again needed little time to break, slamming a ball back at Cibulkova’s feet and forcing the Slovak to knock the ensuing shot into the net, to go up 2-1. She immediately lost serve again, but then broke on a second consecutive occasion and never relinquished that edge.

Ostapenko held at love to close within one game of the semifinals, then came within two points of the match on Cibulkova’s serve before closing out the victory with another love hold. She controlled a pair of short rallies before fittingly finishing with a pair of solid groundstrokes, winning her 10th straight set at Wimbledon as she remains unblemished through five matches.

Now a round further than her previous career-best from a year ago, Ostapenko will seek her second grand slam final against the two-time major champion Kerber, who lost a compelling Wimbledon final two years ago against Serena Williams. It will be the first meeting between the top two seeds remaining in the draw.