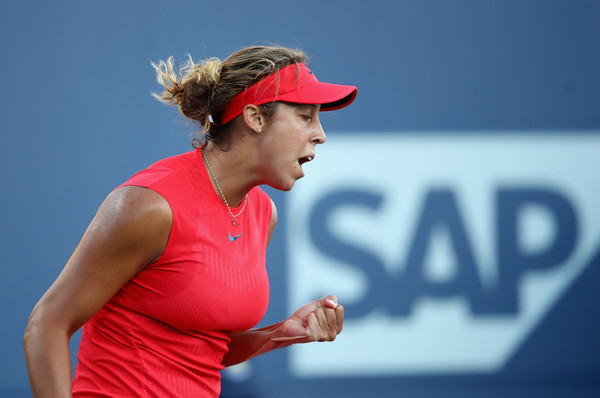 Madison Keys, at 22 years old, won her third WTA title — and her first on a hard court — on Sunday by beating fellow American CoCo Vandweghe 7-6 (4), 6-4 in the Stanford final.

Both sets were tight, as there was only one break of serve the entire match.

At 2-2 in the opener, Keys faced a break point, but she fought it off with an inside-out forehand winner. Then at 3-3, Keys double-faulted into another break point. That one she canceled by hitting a backhand winner down the line.

Vandeweghe, serving from 4-5 to stay in the set, found herself down 30-40 after Keys curled a forehand pass, but she brought the game to deuce with a forehand winner. Vandeweghe went on to hold for 5-5. In the next game, Vandeweghe had a set point, but Keys hits a serve out wide to the backhand side that the Australian Open semifinalist was unable to return. Vandeweghe then held to send the set to a tiebreak.

Keys got the first mini-break with a forehand that landed at Vandweghe’s feet. Vandeweghe broke back on the next point, though, for 2-2. Keys later got another point off Vandeweghe’s serve to change sides up 4-2. But with a Keys crosscourt backhand slice that didn’t have the gas to get over the net, the tiebreak was back on serve at 4-5. Keys, on the next point, though, hit a forehand winner to take a  6-4 lead. She won the breaker 7-4 with another forehand winner, putting herself one set from the trophy.

Madison Keys saves all 3 BPs she faced in the set and takes the tiebreak to seal the 1st set.

The first eight games of the second set stayed on serve. But with the score 4-4, Vandeweghe, after fighting off two break points, got broken when one of her forehands went long. This gave Keys the chance to serve for the tournament at 5-4. She held to love with a forehand winner.

“I know it hasn’t been the easiest the last couple of months,” she said, “but I know this means a lot to me, and it also means a lot to you guys, so thank you for everything.”