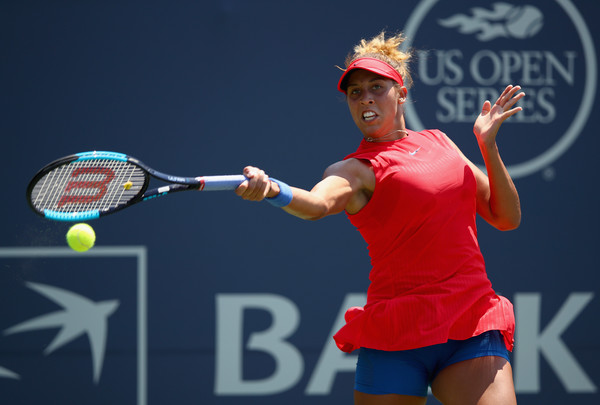 With this win, Keys — who has struggled in 2017 due to injuries — advances to the final of this WTA Premier event, in which she will face CoCo Vandeweghe, who defeated CiCi Bellis 6-3, 6-1 earlier in the day.

After kicking the match off with an ace, Keys went down 15-40 in the first game, and then double-faulted to go down an early break. But on the Wimbledon champion’s first service game, Keys cracked a winner for a 0-40 advantage. Muguruza later netted a forehand, allowing Keys to tie the set 1-1.

At that point, Keys really started connecting on her forehand. This allowed her to hold her serves comfortably and challenge Muguruza on hers.

Keys then broke for 5-3 with a big swing. She consolidated to take the first set 6-3.

Lindsay Davenport having a chat with Madison Keys after the first set @BOTWClassic. pic.twitter.com/6XKuSTs9MP

Muguruza, unable to find the court with her groundstrokes, lost her serve in the first game of Set 2. But Keys’s backhand fell apart in the next game, and Muguruza got the break back for 1-1.

The Spaniard got broken again, though, when she punctuated a back-and-forth service game with a double-fault. Keys consolidated or 3-1 on a Muguruza inside-out forehand that leaked wide. She then broke once again by forcing an error from Muguruza.

Two holds later, Keys was up 5-2 and serving for the match. Muguruza, unable to handle the power of Keys’s serve, failed to break.

"I got to be the underdog so that was fun! I'm really excited to be in the @BOTWClassic Final." –@Madison_Keys pic.twitter.com/4KFdVFUkCZ