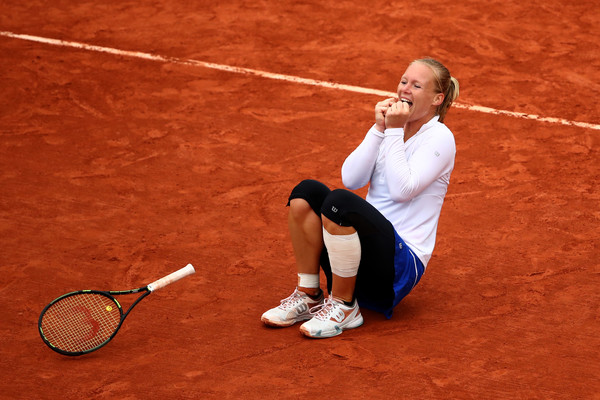 The first set was full of breaks, and Bacsinszky went into a 4-2 lead after saving 2 break points and stopped the streak of 3 breaks in a row. Bertens broke back to 4-4 with a clean break, but Bacsinszky got the break back after a long game and was serving for the set at 5-4. The Swiss had a lead of 30-15, but lost 3 points in a row and it was 5-5. Bertens held her serve, putting Bacsinszky under pressure, and took the second set point to win the first set 7-5.

Bertens commented on her match: “I think it was really difficult today. The circumstances were really tough. The court is really slow. The balls are heavy. It’s really tough to play aggressive, and especially with Timea. She is like changing a lot, like with some slower balls and some higher ones, so it was pretty tough for me. But I think afterwards I was 4-2 down, and then I was just like, Okay, we are just gonna be calm and try to fight for each point. I did it and I won the first set. Yeah, it was just keep on fighting for every ball.”

During the break, Bertens called for a medical timeout for her left calf. The leg was bandaged and taped, and the Dutch looked as good as new, giving thumbs-up and smiling to the crowd while receiving her treatment.

“Well, I have some problems with my calf, yeah. What I said, I’m just gonna prepare again for tomorrow, do everything what I can with the physios, and we will see how it is tomorrow.” Bertens said.

Bertens ran away with the second set, getting a strong lead of 4-0. The Dutch lost her serve for the first time in the second set after leading 40-30 on serve, but got caught up in a long game, saved 2 break points but eventually lost her serve. After this game, it looked like fatigue was starting to set on Bertens. Since last week, the Dutch has played 19 matches in singles and doubles, so fatigue was only a matter of time. Bacsinszky held her serve and had chances to equal the second set, but Bertens fought back. She saved 3 break points and won the game for 5-2. Bacsinszky was serving to stay in the match and leading 40-30, but Bertens gave her all, and after 1 hour and 53 minutes she fell down on the clay, victorious.

The conditions in Paris were quite tough. In only 13 degrees Celsius weather, Bertens had to wear a long sleeved shirt and leggings throughout the match to keep herself warm, which seemed to work. In the live rankings, Bertens is currently at No. 27, which will mean that she will reach her new career high ranking and might be seeded at Wimbledon.

This is what Bertens had to say about the causes of her recent form: “Well, I remember like one thing I remember is like my semifinal in Rabat. I had match point there I was losing the match and I wasn’t just — in my head I was so stressed and all the time and we were like talking with my coach after that match for so long. I think after that match I just was so calm in my head and just trying to go out there every day and just give everything and then, yeah, just do my own thing. I think that’s the most important thing.”

Andreescu was playing in the main draw of a WTA grass-court tournament for only the second time in her career after Wimbledon 2017.

Alize Cornet’s run at the Bett1 Open in Berlin continues as she managed to upset Bianca Andreescu 7-6(2), 7-5 in two hours and six minutes on Steffi Graff Stadion.

“At the beginning of the match I was feeling very good,” said Cornet. “I played some of my best tennis at the start of the match and I think I felt more comfortable than in the first round. The first match helped get me more comfortable on the surface but it was a huge battle playing a match that lasted over two hours and I am really happy that I got through”.

It was the number three seed who got off to a fast start being the more aggressive player earning two chances to break in the opening service game of the match but failed to convert. The very next game it was Cornet with three chances to take the lead and she did just that and it stayed on serve until 4-2 until Andreescu had a chance to break to go back on serve and she would get the break back.

At 5-4 the world number 63 reached set point but Andreescu managed to save it with one of her big serves and held serve before going back on the offensive. Earning another breakpoint but again couldn’t finish and the set would be decided by a tiebreaker.

She carried the momentum into the second frame and in the first game she set up two breakpoints with a stunning forehand winner and broke to take a 1-0 lead. At 3-1 the world number 63 had a chance to go up a double break and she did just that breaking again to get a 4-1 lead but the Canadian responded right away by breaking right back the very next game.

At 4-3 the Toronto native had a break chance to go back on serve which she converted on to level the set at 4-4 and it stayed on serve for two more games until it Cornet managed to get the crucial break to take a 6-5 lead and serve out the match.

” She’s a really talented player, she plays amazing and she is dangerous on every surface but I think today my experience on grass helped me”. Cornet commented on her opponent.

She will now face either Garbine Muguruza or Elena Rybakina in the quarter-finals.

There were three other second round matches being played on Steffi Graff Stadium. The day started with another upset as Ekaterina Alexandrova beat the number two seed Elina Svitolina in straight sets 6-4, 7-6 in only an hour and 30 minutes.

Belinda Bencic, the number five seed, had no issue dispatching the Croat Petra Martic 6-3, 6-4. In the final match of the day, a third upset occurred when Madison Keys beat the top seed Aryna Sabalenka in three sets 6-4, 1-6, 5-7.

The number six seed only needed 80 minutes to advance past her Romanian opponent. 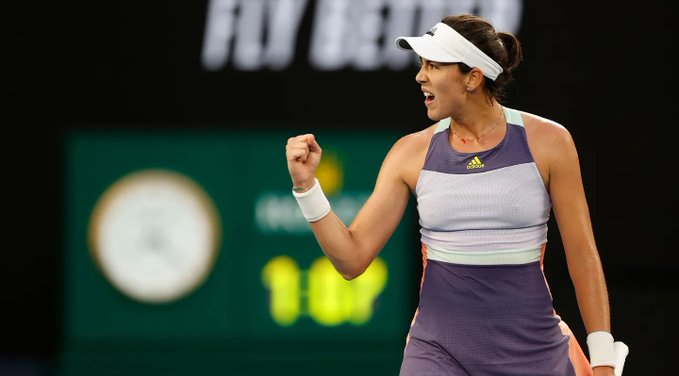 Garbine Muguruza started her grass court season on the right foot beating Sorana Cirstea in straight sets 6-3, 6-2 in one hour and 20 minutes on Steffi Graff Stadium.

She will next face Elena Rybakina who was pushed to three sets by the American Shelby Rodgers 2-6, 6-3, 6-4 in a match that lasted one hour and 43 minutes.

Angelique Kerber only needed one hour to dispatch the Japanese player Misaki Doi 6-2, 6-1 and after the match she gave her thoughts on what seemed like a comfortable first win on grass for the local favourite.

“It was a really solid match and it’s never easy to play a first match on a grass court, especially against a lefty as well, so I’m really happy about my performance and how I started the grass court season,” She said.

Kerber will now face the daunting task of playing the Belorussian Victoria Azarenka who beat another German Andrea Petkovic in a tough straight sets victory (6-4, 7-6).

In the other results of the day the Croat Petra Martic needed three sets to beat the American qualifier Asia Muhammad 7-6, 4-6, 6-3 to set up a second round match with Belinda Bencic.

In an all American battle Jessica Pegula only played 12 games against Hailey Baptiste who was forced to retire due to injury, Pegula will next face Karolina Pliskova in the next round.

The young Russian Veronika Kudermetova needed three sets to beat the Czech Karolina Muchova in a match that went two hours and 28 minutes 7-6, 5-7, 6-2. She will now face Liudmilla Samsonova who pulled off the only upset of the day by beating Marketa Vondrousova in straight sets 6-4, 7-6 (6).

Round two begins on Wednesday with four second round matches and will feature Elina Svitolina taking on Ekaterina Alexandrova, as well as Bianca Andreescu facing Alize Cornet.