Lucie Safarova has had to withdraw from the upcoming Australian Open due to a bacterial infection which also forced her to miss out on this week’s Hopman Cup where Karolina Pliskova took her place.

This will be the first Grand Slam in almost a decade (Wimbledon 2006) that the Czech player misses out on and her absence will also affect the seedings as Venus Williams will push up and take the number eight seeding, which makes a huge difference come the quarter final round.

“I still felt pain in my joints. My recovery got complicated in the last few days and so I was unable to train and head to Australia well prepared. That’s why I opted to rest and recover gradually”, stated Safarova in a press release.

The left-hander could make her first appearance of the season in the Fed Cup tie against Romania in February, when the Czechs will get their title defence underway in Cluj. “If everything goes perfectly that will be my first event, if not I will aim to return on the American swing”, concluded Safarova.

Related Topics:Lucie Safarova
Up Next 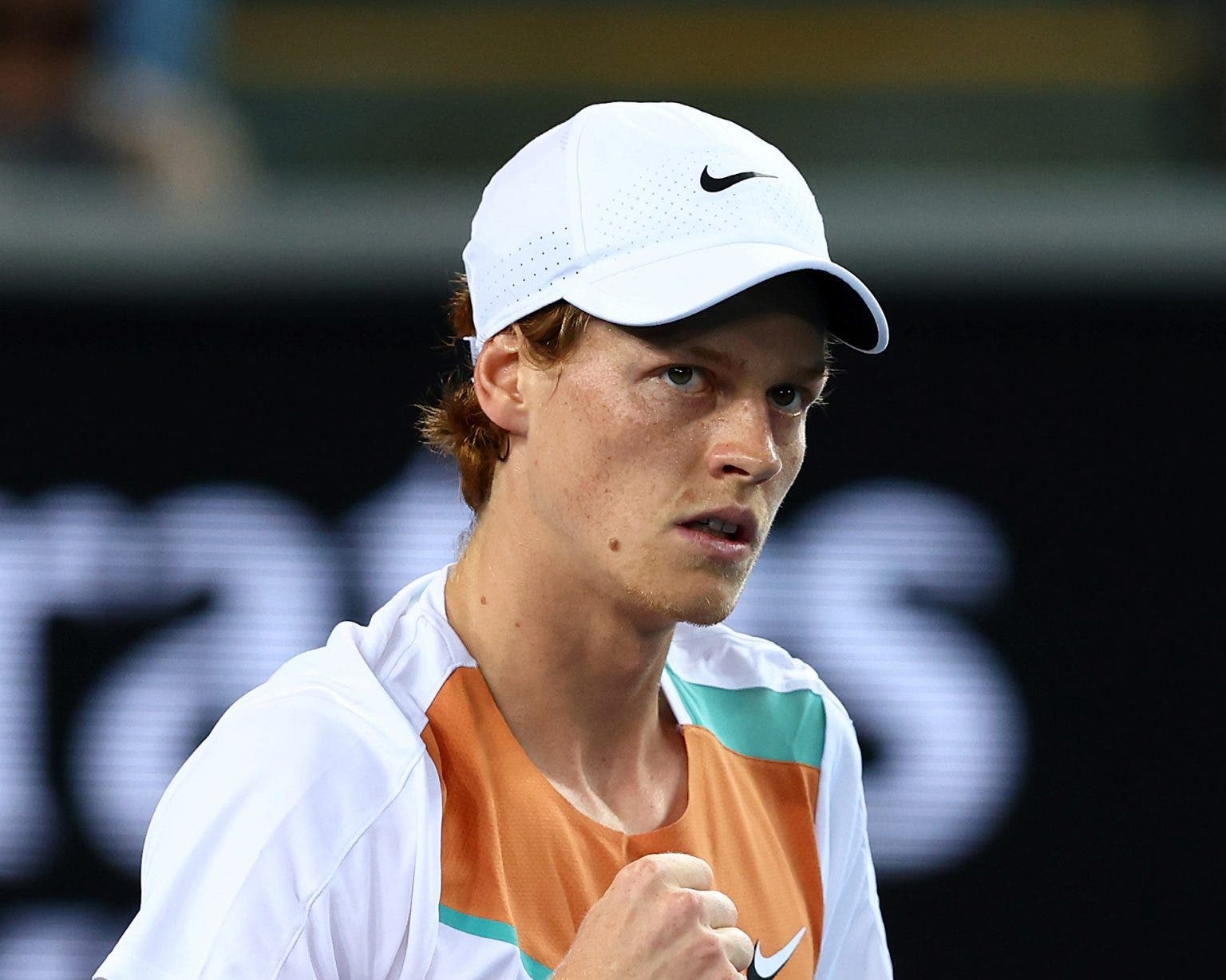 Jannik Sinner has taken the positives from his straight-set defeat against Stefanos Tsitsipas in the quarter final at the Australian Open. The Italian 20-year-old star believes that the experience will help him to continue improving.

“It’s a positive tournament. I think that what I have to improve is tennis in general. I have to serve better. I have to serve better, I have to do everything more, especially when you play against the top guys. My goal is to play many matches like this, important matches against the best guys in the world, and then we see and then I grow. I think it was good. I played matches, and I had a good experience. Let’s see what I can do here next year. I think I can go back with a positive mindset, knowing that I have to improve many things. There is a lot of work”, said Sinner.

Sinner praised Tsisipas, who has extended his win-loss record to 3-1 in the four head-to-head matches against his Italian opponent.

“I think he played better than me than me today. He served better. He moved the ball better than me. He was moving better than me. It’s tough to play against him when he plays like that. I could not generate the power that I would have wanted. I was trying to move him, but I was maybe a little bit too far back because he played incredible today. I didn’t have many chances. Especially he was serving well, so returning his serves was not easy. My return serves were not so good, especially when he had second serves, or I played very short or I missed. This is why he didn’t play so many second serves. I tried to step a little bit closer, tried to open the court, but today it was tough. I know what what I have to improve many things. This was a lesson for me”, said Sinner.

Sinner, who was making his third appearance at the Australian Open, dropped just one set en route to his second Grand Slam quarter final two years after losing to Rafael Nadal in this stage at Roland Garros in 2020.

“In the past few months I have matured as a player in many aspects, but above alla s a person. This is the most important aspect.

Sinner has become the fifth Italian male player to advance to the last eight in Melbourne after Matteo Berrettini, who beat Gael Monfils in five sets reaching the semifinal the previous day. Berrettini has reached at least the quarter finals at all four Grand Slam tournaments. With a win over Rafael Nadal in the semifinal of the Australian Open, Berrrettini would become joint second Italian player for most Grand Slam semifinals in history alongside Adriano Panatta, who won Roland Garros in 1976. Sinner reached a career-high world number 10 last November. When Berrettini was that age, he had never been inside the top 500.

Sinner has a bigger respect for his friend Berrettini on and off the court.

“I enjoy watching Matteo’s matches. I admire him as a player and as a person. We are good friends I wish him all the best for the next matches. During the ATP Cup we practiced on the court and I now know him better. I have learnt a lot from training with him. Matteo is a very good guy. We get along well. Our rivalry is helping us to push beyond our limits”, said Sinner.

Sinner will return to the court to play at the Rotterdam ATP 500 indoor-court tournament. 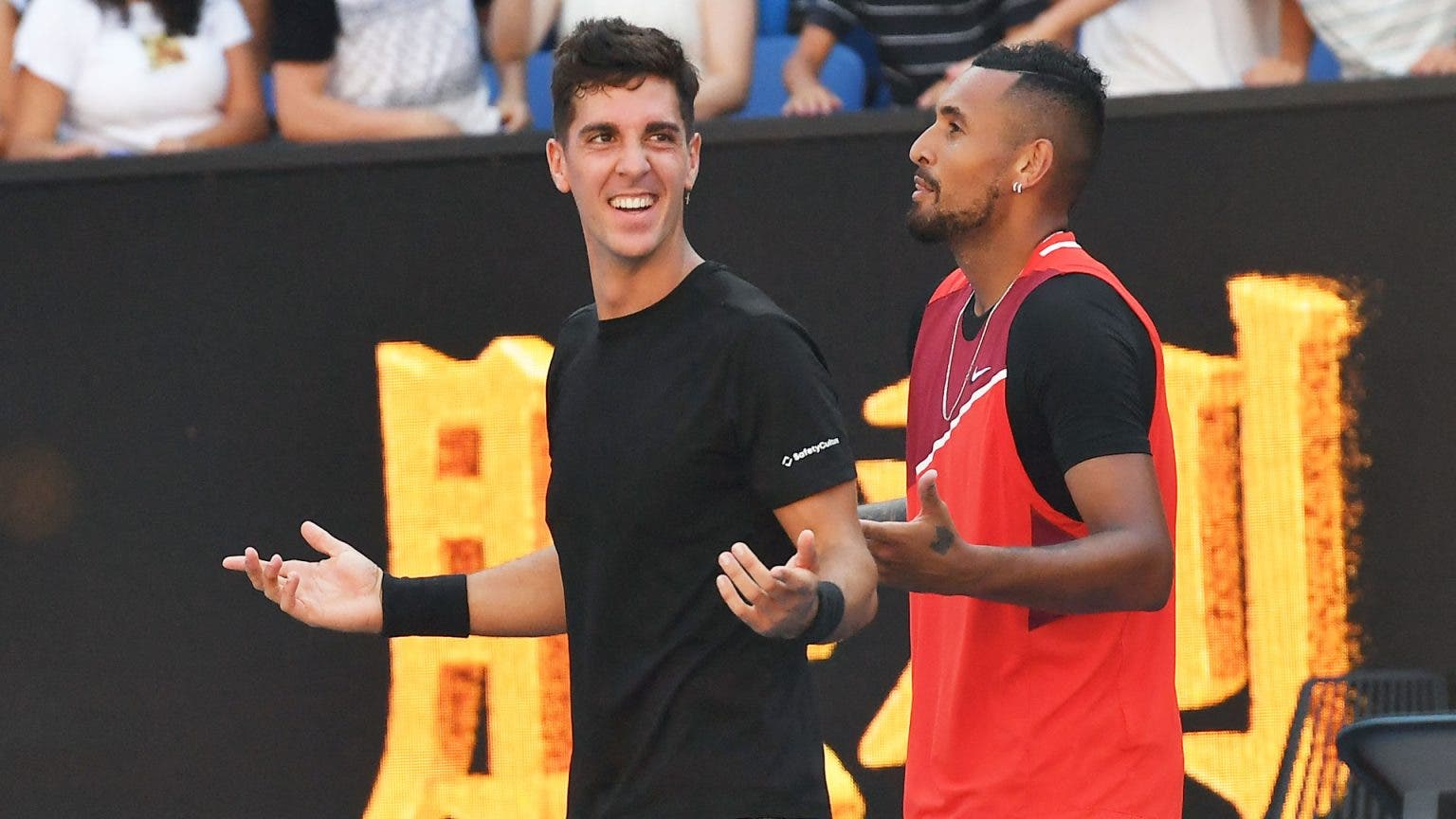 Australian wild cards Thanasi Kokkinakis and Nick Kyrgios knocked out sixth seeds Tim Puetz and Michael Venus 7-5 3-6 6-3 after 2 hours and 15 minutes to advance to the semifinals in the doubles tournament on Kia Arena at the Australian Open in Melbourne.

Kokkinakis and Kyrgios hit 25 aces and won 86% of their first service points.

Kokkinakis and Kirgyos, who won the Wimbledon Junior title in the doubles together, earned the only break in the 11th game to claim the first set 7-5. The Aussies fired 13 aces and won 91% of his first serve points.

Kyrgios and Kokkinakis broke Puetz to love to open up a 3-1 lead. The home team fended off a break point in the seventh game to move ahead 5-2 and closed out the third set 6-3 with a double break in the ninth game.

The Aussie doubles team have never won a doubles Grand Slam title, but have won a singles ATP title each with different players. Kyrgios won the 2018 ATP Tour title with Jack Sock, while Kokkinakis claimed the Brisbane International with Jordan Thompson in 2017.

“We are stoked with the win. We came big in the big points”, said Kokkinakis.

Kokkinakis and Kyrgios recorded their third consecutive win against a seeded team to reach their first Grand Slam semifinal.

“It’s been incredible. Another tough win. I think that’s probably the toghest pair that we have played. They brought some serious tennis today and it wasn’t easy”, said Kyrgios.

Kyrgios and Kokkinakis set up a semifinal clash against Marcel Granollers and Horacio Zeballos, who took down John Peers and Filip Polasek 7-6 (7-5) 6-4 in 1 hour and 49 minutes. Granollers and Zeballos fended off a set point on serve at 5-6 30-40 in the first set, before breaking twice in the second set to close out the match. The Argentine and Spanish team have won six titles as a team, including four Masters 1000 tournaments in Montreal 2019, Rome 2020, Madrid and Cincinnati in 2021.

The Estonian is through to the last eight at Melbourne Park for the first time in her career. 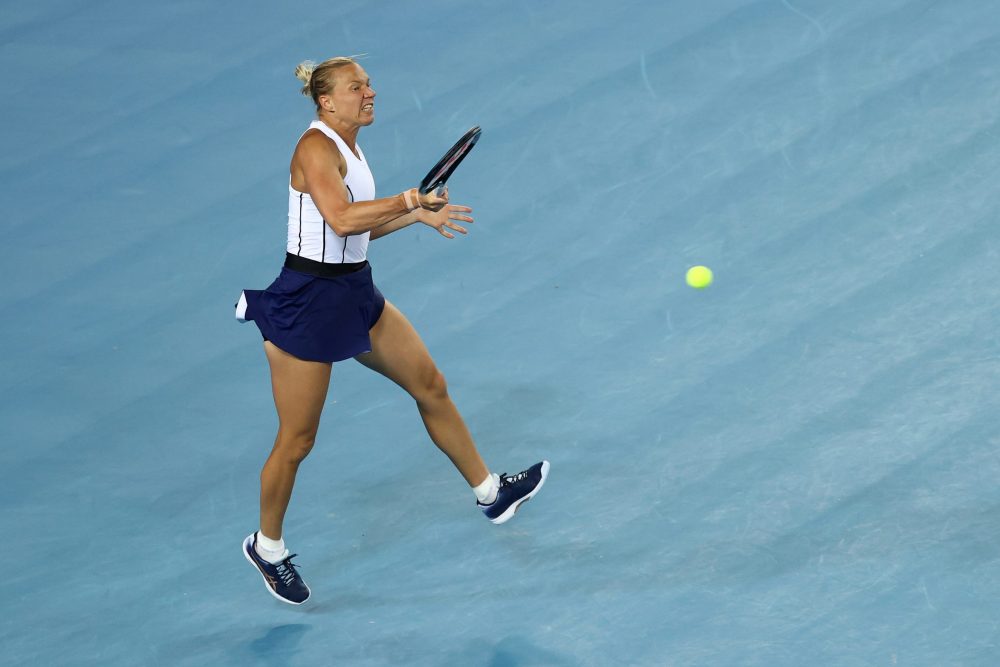 World number 115 Kaia Kanepi produced one of the shocks of the tournament to send Aryna Sabalenka crashing out.

Through to the quarter finals for the first time in her career, she will face Poland’s Iga Świątek. The 2020 French Open champion saw off Sorana Cîrstea in three sets.

The first set saw power tennis from both players out on Margaret Court Arena.

Kanepi held serve right up till 5-5, when Sabalenka turned the screw.

The Belarussian was pushed to deuce on her own service game but did enough to edge ahead.

She then applied enough pressure, opening up three break-points and only needing one, took the first set 7-5.

But the veteran Estonian roared back in the second set, nailing a huge break of serve to go 1-0 ahead.

Kanepi secured the double break, soon steaming ahead at 4-0 and eventually pocketed the set 6-2.

The 23-year-old from Minsk was beginning to look jaded in the deciding set, as Kanepi took an immediate break of serve.

She soon went 4-2 ahead but Sabalenka fought back for 4-4, as the set went back on serve.

Kanepi got the decisive break to move 5-4 ahead and serve for the match.

Nerves got to the Estonian, however, as Sabalenka saved four match points.

Three times at deuce, and on her third break point, Sabalenka levelled the set for 5-5.

Both players held serve, under enormous pressure, to send the match to a super tie-break.

Kanepi surged into a 5-2 lead but Sabalenka played clutch to level at 5-5.

It was soon 7-7, but the pressure got to Sabalenka, and Kanepi won three straight points to win the biggest match of her career.

Kanepi said she was shocked to have won. “Actually, I thought I was going to lose it after the match points I had on my serve.”

“It was really difficult to come back. I don’t know how I managed to do it.

“I was really tight. My hand was shaking when I started serving. I didn’t make any first serves in, and that added to the pressure. It was crazy.”