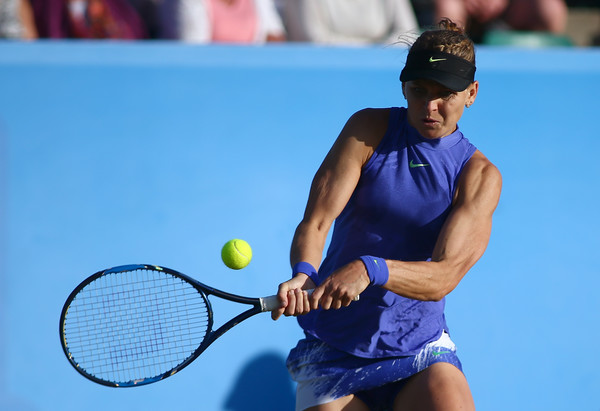 Lucie Safarova won the best women’s quarterfinal of the day taking down Tsvetana Pironkova in three sets 6-3, 0-6, 6-4 to seal the last semifinal spot at the Aegon Open in Nottingham.

The fifth seed was far the better player in the opening set and broke the Bulgarian’s serve twice to make the perfect start. It was a complete role reversal in the second set and at the beginning of the decider as Pironkova took eight games in a row to go favourite to win the match. Safarova showed her class and fought back brilliantly to take a 4-2 lead in the final set and resisted a comeback from her opponent in the latter stages to advance to the last four.

Heading into the match Safarova led their head to head 4-1, with their last meeting coming on the clay courts of Madrid in 2015. This was to be the first meeting on grass and both players had differing routes to reach this stage. Pironkova came through her first two matches without dropping a set but Safarova had to come through two tough three setters, including a final set tiebreak against Hsieh Su-Wei in the last round where she saved two match points.

Pironkova had the first opportunities to break in the fourth game Of the match but Safarova played both points confidently striking a backhand winner followed by a forehand winner to level at two games all. The Bulgarian then squandered a couple of chances to hold, allowing the fifth seed to take her chance and move up a break herself.

The world number 126 faced even more trouble as she faced three more break points in her following service game. Pironkova saved the first with an overhead smash, the next with a second serve ace and the third with an unreturned serve before holding to keep herself in the first set.

Safarova staved off two break points in the following game and put her opponent under pressure at 5-3, with Pironkova buckling under the pressure, double faulting to go down 0-40. The Czech then forced her opponent to go wide with the backhand on the stretch to seal the opening set 6-3 after 42 minutes.

The former semifinalist at Wimbledon had the perfect reprieve in the second set as she broke in the opening game as she started her attempt to comeback in the match. The fifth seed’s level completely dropped off and she was a shadow of a player of the one in the first set. As a result Pironkova seized the moment and secured a double break and moved even further in front at 5-0. The Bulgarian comfortably served out the set to seal the bagel and force a decider.

In the final moments it was Safarova who stepped up and held her nerve to take the final two games to seal victory in one hour and 49 minutes and book a semifinal matchup with 20-year-old Donna Vekic.