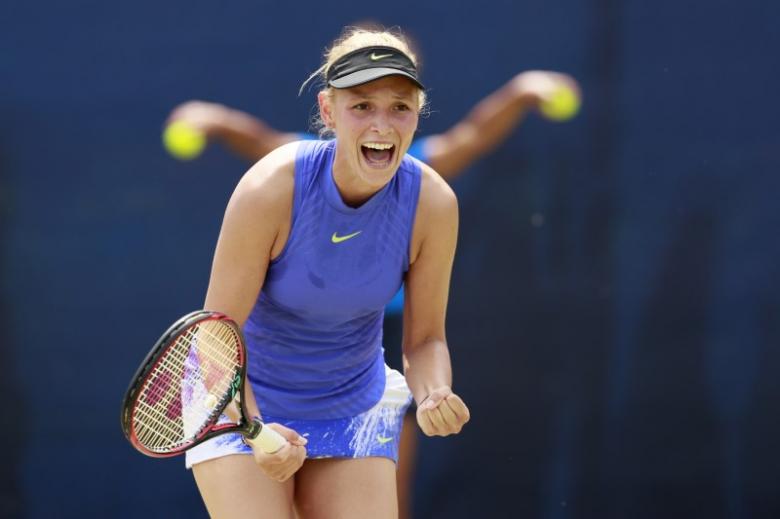 Donna Vekic reached her first WTA final of the season and her second on grass in her career after she came through a long match against fifth seed Lucie Safarova 7-6(5), 3-6, 7-6(4) in two hours and 48 minutes at the Aegon Open in Nottingham.

The 20-year-old recovered from a break down in the first set and prevented her opponent from serving it out to pinch it on a tiebreak before the Czech responded to force a deciding set. Both players had their chances to break, particularly Vekic, but the Croat had to wait until the nail biting final set tiebreak to secure victory in her toughest match of the season so far.

This was the players first meeting and both had gone through differing routes to reach this stage. Fifth seed Safarova had to come through three matches which went the distance, first over Grace Min, then she saved two match points to defeat Hsieh Su-Wei in a final set tiebreak before seeing off Tsvetana Pironkova in a terrific quarterfinal 6-3, 0-6, 6-4. Vekic cruised through to her first WTA Tour semifinal of the year without dropping a set, defeating sixth seed Shelby Rogers in the first round before comfortably dismissing Julia Boserup and Maria Sakkari.

20-year-old Vekic had the first break point opportunities with three chances, but the Czech, who had dealt with a lot of adversity in matches so far this week, stayed tough and held to stay with her opponent. Safarova only needed the one chance to take advantage after a double fault in the seventh game from Vekic left her break point down. A fiercely struck return of serve from the fifth seed was enough to move ahead in the set.

A double fault threatened to stop Safarova’s momentum as she fell break point down, but an ace down the tee snuffed out the chance, much to Vekic’s frustration. When serving for the set a double fault from Safarova left her facing two break points and despite saving the first the Croat was not to be denied at the second time of asking as she levelled at five games all.

Vekic had a set point in the twelfth game but went long with her return of serve before the fifth seed forced a tiebreak. Safarova gained an immediate mini break but the Croat won both of the next two points against the serve before firing down two aces to take a commanding 4-1 lead. The Czech hit back to level the score only for the 20-year-old to break away once more, finishing with an unreturned serve on her second set point to seal the breaker by seven points to five.

Safarova has been used to going to three sets in Nottingham this week and would have to do the same again if she wanted to make the final. She began her journey back into the match by breaking Vekic in the fourth game, closing with a forehand cross court winner before holding to love to swiftly establish a 4-1 lead.

The following game saw Vekic recover from 0-40 down to hold to keep her second set hopes alive but the Czech made sure the match went the distance with a comfortable hold to love at 5-3 with an ace to finish to seal the set.

In the deciding set the 20-year-old faced further pressure but managed to halt her opponent’s momentum by saving a break point. It was then Safarova’s turn to face a break point in the fourth game but she was also up to the task, firing down a big serve which went unreturned.

The pressure on serve continued for the Czech in her next service game where she had to face yet more break points. The fifth seed saved the first with backhand winner but was rather fortunate to save the second after her ball, which appeared to go long was originally called out, but then corrected by the umpire. Vekic was distraught with the decision but with no hawk-eye there was nothing that she could do as Safarova held to level at three games all.

Both players continued to play a high standard of tennis in very warm conditions at the Nottingham Tennis Centre and with nothing to separate them they found themselves in a final set tiebreak. Vekic secured the early mini break at 2-1 but squandered it immediately. At 4-4 the 20-year-old stepped up her game and raised her level to breakaway after a backhand went wide from Safarova to give her opponent two match points. Vekic only needed the one chance and sealed the best win of her season to set up a clash with Britain’s Johanna Konta in Sunday’s final.

EXCLUSIVE: Donna Vekic Reflects On Biggest Win Of Her Season To Date At The Aegon Open