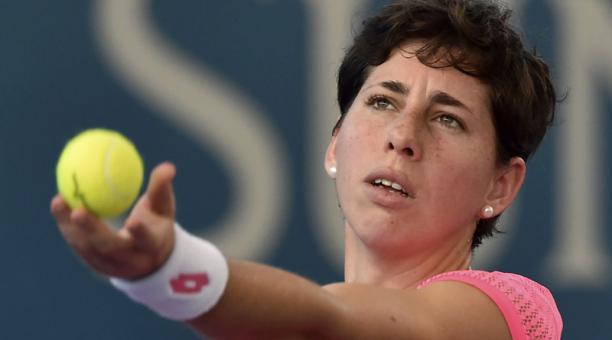 It was a huge match for 21-year old Daria Gavrilova. Every young Australian dreams of playing a night session with a packed Rod Laver Arena spurring you on towards the quarter final of your home slam. Gavrilova, who had never been past the second round of a grand slam, came out pumped, and her energy rubbed off onto the fans, creating an electric atmosphere. The experienced Carla Suarez Navarro was overcome by the situation, and before she knew it, the first seven games of the match had flown by and she hadn’t put any of them on her side of the scoreboard.

But the momentum changed in the second set. Gavrilova’s greatest enemy was herself and her excessive eagerness to win. The Aussie was impatient and getting too frustrated by her mistakes, which was surprising given the overwhelming scoreline. Suarez took a medical time out at 4-3 for a knee injury which she later admitted caused her to play with pain right until the end, but it wasn’t her knee, rather her head what saw her turn this one around.

The composure of Suarez, who analysed what was happening and looked for solutions (as opposed to Muguruza against Strycova a couple of days ago) was instrumental in the outcome of the clash. A long forehand from an increasingly erratic Gavrilova gave Suarez the set 6-3.

But Gavrilova broke in the opening game. In her following service game she hit a long drive volley which would have consolidated the break and she came close to breaking her racket. This surprising body language, despite being in the lead, played into the hands of Suarez, who could see how Gavrilova was on the edge being in the lead, meaning that she would most probably self-destruct if she went behind. The Aussie ended up winning that service game with an ace, sparking huge young Lleyton Hewitt-esque celebrations.

But that would be the last game Gavrilova would win. Suarez held her next service game after being severely under the cosh, and that laid the foundations to the eventual comeback. Gavrilova wanted to get back in it so desperately that she wasn’t thinking clearly and rushing her game, even making gestures towards her coach at one point asking for some more support.

The self-destruct button had been hit and there was no recovering. Suarez closed out a fantastic turnaround against the home-town favourite and beat her heart with her fist as she walked towards the net, as it was that muscle which carried her home. Next up for Carla Suarez Navarro is a quater final meeting with Aga Radwanska.

“I just tried to fight for every ball, every point. It’s difficult when you start like this, on this court and against a local player. I just had to believe and I’m happy because I fought until the last point”, said Suarez in her on-court interview. Asked about the proposition of facing Radwanska,the Spaniard claimed that “she won the last tournament of last year and the first tournament of this year, it will be tough for sure. I know Aga very well but I’m happy to be in the quarters again and I’ll try to be ready for it”.

Novak Djokovic: ‘I Can’t Get Worse Than That’

Serena Williams Sets Up Sharapova Showdown No.21 In Melbourne