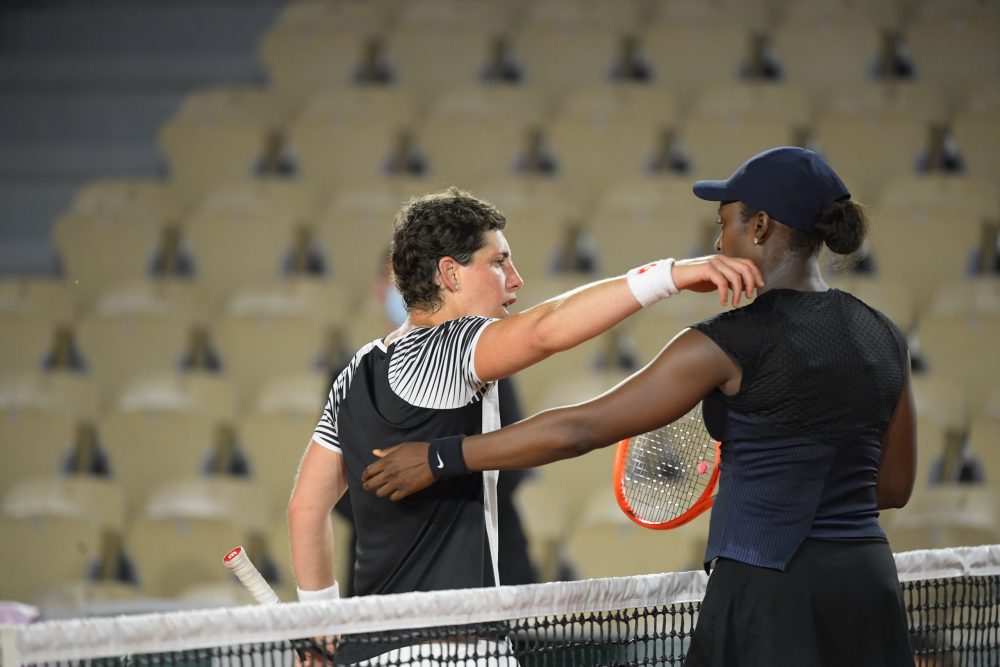 Carla Suarez Navarro greets Sloane Stephens at the net following their first round match at the French Open (image via https://twitter.com/rolandgarros)

Spain’s Carla Suarez Navarro said farewell to the French Open on Tuesday in an empty stadium after losing her first match since returning to the Tour following a battle with cancer.

The former top 10 star was edged out 6-3, 6-7(4), 6-4, by Sloance Stephens after fighting for more than two hours on the court. It was the first time the Spaniard has played a competitive match since March 2020 after being diagnosed with an early stage of Hodgkin’s lymphoma. An uncommon cancer that develops in the lymphatic system. She completed her treatment and recovery from the illness in April.

“It was a long time, really tough moments,” she commented on her experience with Cancer following the match. “But every time I had on my mind that I wanted to come back. Roland Garros is one of my favorite tournaments.
“I tried to prepare myself the best that I can. Obviously I need more time but I think I had a good time this week practicing, I had a good level in my match.”

32-year-old Navarro already confirmed that this year’s will be her last on the Tour. She had originally planned to retire in 2020 before the COVID-19 pandemic and then her diagnoses derailed her plans to do so.

Due to having her match scheduled as the last one to take place on Tuesday, it went beyond the 9pm curfew. Meaning that the later stages had to be played behind closed doors and therefore there was no crowd to cheer as she walked of the court at Roland Garros for a final time. Something she admits made her ‘sad.’

“I had a little bit of the crowd, and I really enjoyed it. But then I was so sad when they had to leave,” she said. “It was difficult. I thought about that yesterday (Monday) when I saw that I was the fourth match on court. Sometimes it can happen.”

Suarez Navarro ends her French Open career with a total of 26 wins against 12 losses. On her debut back in 2008 she reached the quarter-finals before doing so again in 2014. Furthermore, she also reached the semi-finals of the doubles tournament back in 2014 with partner Garbine Muguruza.

“I feel proud of what I did but I’m really sad because I lost. I mean, every time I go on court, I want to win,” she concludes.

Before leaving the sport for good, Navarro aims to play a few more tournaments, including the Olympic Games. She is currently ranked 118th in the world.

PTPA Supported By Majority Of Players And Has ‘Very Wealthy’ Backers, Claims Djokovic