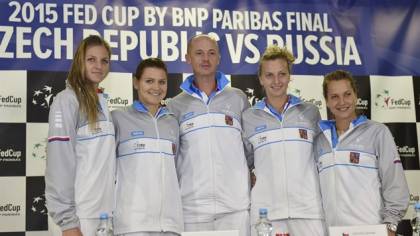 Czech Republic clinched their fourth title in the last five years with 3-2 after a thrilling fifth doubles rubber match where Karolina Pliskova and Barbora Strycova came back from a set down to edge Anastasya Pavlyuchenkova and Elena Vesnina with 4-6 6-3 6-2. It’s the fourth title in five years for the Czech team but the ninth triumph in the history of this competition considering the five wins of the former Czechoslovakia.

Pliskova and Strycova were the heroines of a fantastic week-end for the home team who were pushed by the incredible home crowd who packed the O2 Arena in Prague. What a week-end for the Czech team who played without this year’s Roland Garros finalist Lucie Safarova who was sidelined from the week-end by injury problems but showed their usual strength with great players like Karolina Pliskova, Barbora Strycova and Petra Kvitova.

Czech Republic went up in the second game a break to take a 2-0 lead after Pliskova hit a volley at the net . Vesnina (winner of two Grand Slam doubles titles at the 2013 Roland Garros and the 2014 US Open) and Pavlyuchenkova broke Strycova’s serve in the third game and consolidated the break with a hold in the fourth game to draw level to 2-2.

Strycova, who boasts a 7-3 winning record in Fed Cup doubles, held serve in the seventh game to love to give the Czech team the 4-3 lead. At 4-4 Vesnina and Pavlyuchenkova broke Pliskova’s serve to love with a backhand winner to love. The Russian team served out to clinch the first set with 6-4 with a volley from Pavlyuchenkova.

At the start of the second set Pliskova saved two break points to hold serve. The Czech team broke Vesnina for 2-0. Strycova held serve to give the home team the third consecutive game in the second set.

Czech Republic pulled away to 4-1 as Vesnina missed a volley on game point. The home team broke Vesina to 15 for 5-1 and served for the set.

Vesnina and Pavlyuchenkova saved one of the two break back chances to hold their serve for 2-5. The Russian team held serve comfortably to claw their way back into the set for 3-5. Pliskova held serve to love to send the fifth rubber match to the decisive set.

Czech Republic broke serve in the first game of the decider as Vesnina sent a forehand into the net. The home team consoldated the break to take the 2-0 lead. Russia held serve  Vesnina got the first game on the scoreboard for Russia with a volley winner. Strycova held serve for 3-1. In the fifth game Vesnina won two consecutive points at 40-all to hold serve for 3-2. Stycova faced a break back point as she hit a volley long but the Czech team saved break points to take a crucial 4-2 lead. Czech Republic broke serve for the fifth time in the match to pull ahead with 5-2 before Strycova served the match out.

Czech Repunlic sealed the win on the first championship point for 4-6 6-3 6-2 completing an incredible win after coming back from a set down.

The Czech team danced on the court to celebrate their fourth triumph in front of the home crowd.

“It’s unbelievable. I am speechless. It’s a fantastic feeling. It was always my dream. We decided the doubles. It can’t be better. The crowd helped us giving us a great support”, said Strycova

“It’s definitely one of the biggest wins of my career. I really enjoyed the match and I am really happy that I won”, said Pliskova

“It’s a great day for Czech tennis. I was confident that we could win after Petra Kvitova lost against Maria Sharapova. The crowd pushed us a lot”, said Czech captain Petr Pala.

Details on Nadal’s latest injury has been revealed by a leading source with knowledge of his current situation.

22-time Grand Slam champion Rafael Nadal has suffered a tear in his abdomen but is still hopeful of playing in the Wimbledon semi-finals, according to a Spanish media source.

Sports publication Marca has quoted their sources confirming that world No.4 has been diagnosed with a 7mm abdominal tear. It is understood that Nadal had a medical assessment today following his five-set win over Taylor Fritz. It was during that match that he had a medical time out and was seen crouching over a couple of times in pain after serving.

“I am used to holding pain and playing with problems,” Nadal told reporters on Thursday.  “Knowing that, when I feel something like I felt, something is not going the proper way in my abdomen.’

“I had these feelings for a couple of days. Without a doubt, today was the worst day. There Has been an important increase of pain and limitation.”

There has been no confirmation as to when the injury issue began but Nadal was seen wearing tape in the region during his fourth round match on Monday. It is the second Grand Slam in a row where he has been dealing with a serious injury issue. At the French Open, he received injections into his foot to help deal with his long-term condition. The 36-year-old has Muller-Weiss syndrome which is a rare and degenerative condition affecting bones in the feet.

Nadal arrived at The All England Club on Thursday but he missed a practice session that was meant to start at 12:3O GMT. It is possible that he could try to book another slot for later in the day.  Around 13:00 a member of Nadal’s team told journalist Stuart Fraser that it is unclear if he will practice today or not.

Amid the uncertainty, Marca reports that Nadal will wants to play his semi-final match against Kyrgios, who he leads 6-3 in their head-to-head. He has previously played a Grand Slam with a 2cm tear which was at the 2009 US Open.

Ubitennis has an exclusive interview with the legendary coach of Andre Agassi, Andy Roddick and Andy Murray. 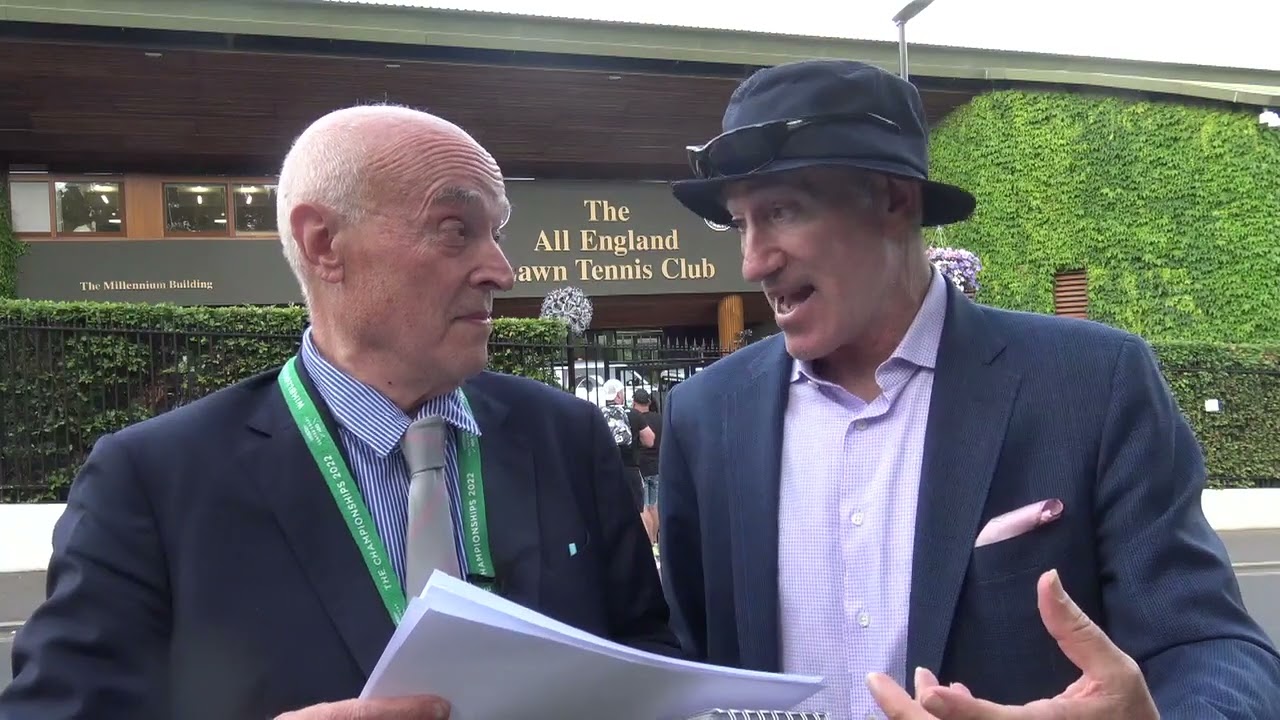 When it comes to looking at the current status of men’s tennis Brad Gilbert is perhaps one of the best people to speak to.

The American reached a high of world No.4 as a player, as well as winning 20 ATP Tour titles. After retiring from the sport in the mid-1990s he has become one of the most well-known coaches in the sport after working with an array of top names. Besides that, he is also an author and commentator on the sport.

Ubitennis caught up with Gilbert at The All England Club where he spoke highly of Italy’s Jannik Sinner who led Novak Djokovic by two sets before losing in the quarter-finals. He also looks ahead to Nick Kyrgios’ semi-final clash with an injured Rafael Nadal.

Ubitennis catches up with the former world No.4 who is currently at Wimbledon. 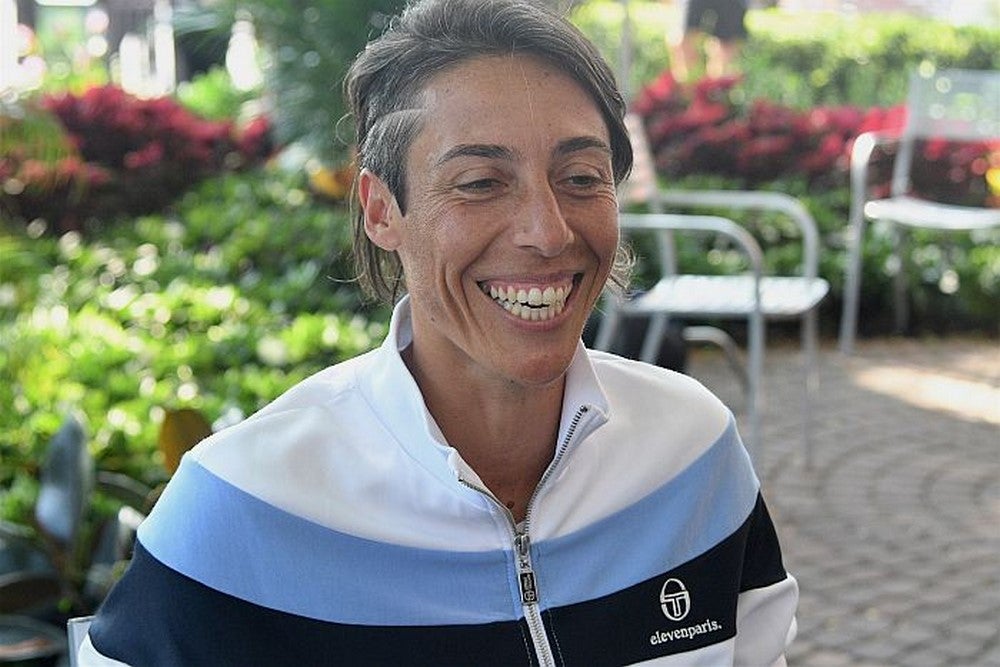 Almost four years have passed since Francesca Schiavone retired from tennis after an illustrious career.

A popular figure on the WTA Tour, the Italian is best known for winning the 2010 French Open, as well as reaching the final of the same tournament a year later. Remembered for her one-handed backhand, her career spanned a total of 22 seasons. She was the first woman from her country to break into the world’s top five and made a staggering 70 Grand Slam main draw appearances over a 20-year period.

Enjoying retirement, Schiavone now has the luxury of watching other players play. Something she is doing at this year’s Wimbledon Championships where she is also playing in the Legends event.

“I have great memories (of Wimbledon),” Schiavone tells Ubitennis. “I walked all the way around the venue and it was like ‘wow.’ I wasn’t able to do this before and now I can do it. I can follow Many younger players, not just the main ones. Wimbledon is very special, I am enjoying it.”

The center of attention for Italian tennis this year at The All England Club has been Jannik Sinner. The world No.13 reached the quarter-finals of the tournament on only his second appearance. Sinner was on the verge of creating a huge upset after leading world No.1 Novak Djokovic by two sets before losing in five. If he had won, he would have been the youngest Wimbledon semi-finalist since 2007.

Despite the disappointment, Schiavone is confident her compatriot is heading in the right direction. He is coached on the Tour by Simone Vagnozzi who has previously mentored 2018 French Open semi-finalist  Marco Cecchinato, as well as Stefano Travaglia.

“I think Jannik is growing already,” she said. “He is adding many things such as going to the net. He is working on his serve and I think he is doing a very good job improving.”

Italian tennis is currently thriving, especially on the men’s Tour with Matteo Berrettini also making waves. At present, there are nine players from the country in the world’s top 100 – five on the ATP Tour and four on the WTA Tour.

Now Schiavone wants to help nurture the next generation of players. Revealing to Ubitennis she has a project underway in her native Milan.

“I’m working on it. I’m going to open some courts in Milan to give opportunities to younger players. then from that follows other things,” she said.
“I can’t say anything more now about it at the moment.”

Schiavone already has coaching experience after briefly working alongside former player Caroline Wozniacki back in 2019 during the clay swing.