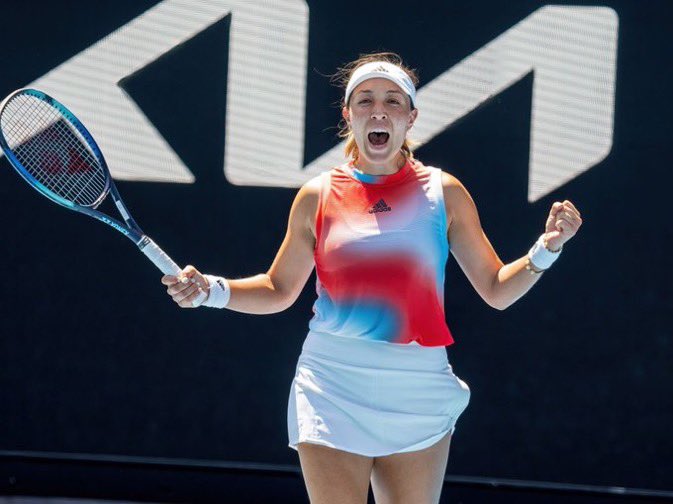 Jessica Pegula’s love affair in Melbourne continues as she made a second quarter final in Australia in the space of 12 months.

It’s safe to say that Sakkari, having reached last year’s French Open and US Open semi-finals, has had better days.

The American goes on to face the world number one, Ash Barty, who beat Amanda Anisimova, and has still not dropped a set in these championships.

Pegula got the perfect start as she broke the world number eight in the opening game, and won eight consecutive points, and soon built a 3-1 lead.

The 21st seed begin to throw in some fine slices and drop shots and was rewarded as she broke again, and held serve to go 5-3 up.

The Greek then showed why she is so highly regarded in the sport, as she broke back and levelled at five-all.

The fifth seed had to dig deep as she held her serve, covering the net well.

But Pegula, 27, dominated the tie-break with some powerful groundstrokes and sealed it 7-0 with an ace.

The 21st seed, kept her level high in the second set and broke in game four, and a powerful cross-court backhand winner saw her race into a 4-1 lead.

Sakkari held her next two service games, but so did Pegula as she confirmed her place in the last eight on her second match point.

The rise of the New Yorker from 61 in the world last January, to hovering above the top 20, is some story.

After the match, she had this to say on Margaret Court Arena.

“It was a hot out there today, so I didn’t really want to play a lot of long points. I really had to step up and be aggressive when I had the chances to,” she said.

“Luckily, I was able to capitalize on that today and play a pretty clean match.”

Related Topics:australian openJessica Pegula
Up Next