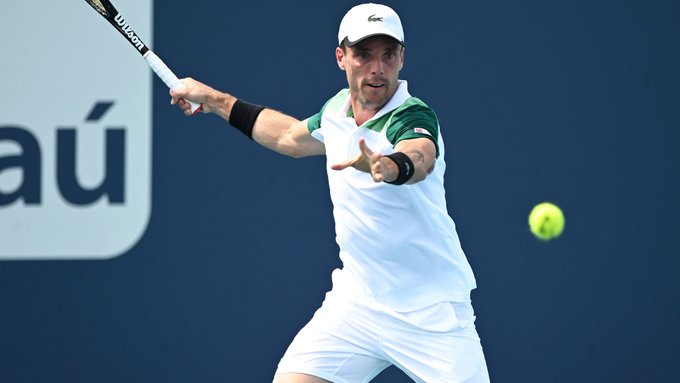 The Spaniard need three sets and over two hours to beat his American friend to reach the quarterfinals.

Roberto Bautista Agut is into the quarterfinals of the Miami Open after dispatching his good friend John Isner in three tight sets 6-3, 4-6, 7-6 in a match that lasted over two hours. The Spaniard hit 20 winners while the American fired 23 aces and 44 unforced errors in the loss.

“He is a good friend in the tour, he always makes difficult matches playing against him, he has a very big serve and a lot of power from the baseline with the forehand and it makes it always difficult, I think I played a brilliant set in the first set, with John (Isner) you always feel under pressure and then the match changed and it was a really tough fight until the last point.”

The match began on serve with neither players giving an inch on their respective service games until 2-2 when it was the number seven seed with the first break opportunity thanks to a great backhand winner.

He would earn the break and that was the only break he needed to serve out the first set.

The begining of the second set was very similar to the first again with both players holding serve until 2-2 but this time it was the American who would earn his first breakpoint of the match when the world number 12 served a double fault.

Isner would break the following point with a sizzling down the line backhand winner. At the changeover the American would sit down and look at the chair and say “Hey did you see that ?”.

At 5-3 the Greensboro, North Carolina native had a chance to break for the set but both his breakpoints were denied by the Spaniard and he would go on to serve out the set to send it to a deciding third set.

The rest of the set neither player cracked on serve and the match would be decided by a tiebreaker.

Isner would regain the break to take a 5-4 lead before once again giving it back as he would miss a volley and send it into the net. It was the American who would earn the first match point on the Spaniard serve but it was quickly saved.

His reward for the big win is either the newly minted as of Monday number one American Francis Tiafoe or the new world number two Danil Medvedev.

In his post game press conference the Spaniard gave his thoughts on his next potential opponent.

“Both players, everyone is good here, the level is high, everyone is playing good, both players are doing well, they are playing very good this year, I am very happy I want to recover well and get ready for tomorrow.”