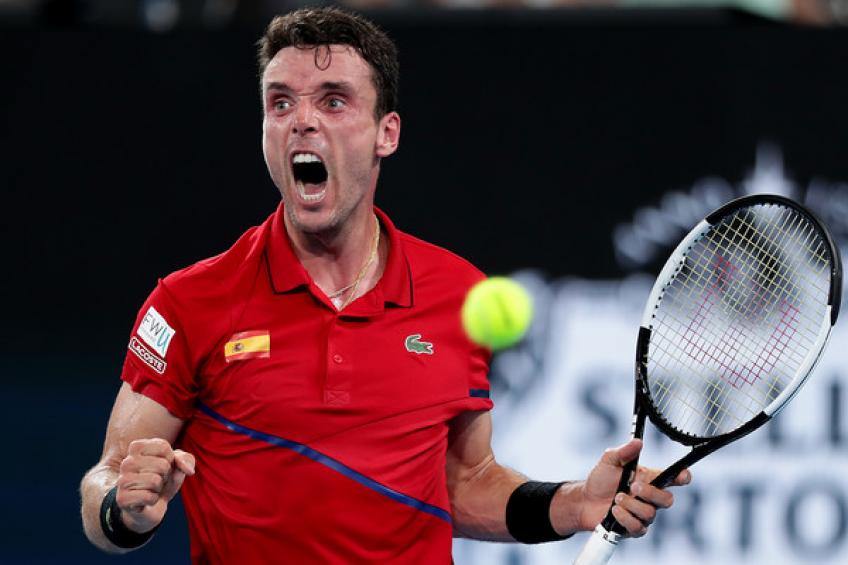 World No.1 Novak Djokovic believes rival Roberto Bautista Agut isn’t given enough credit for his performance in the sport.

The 17-time Grand Slam champion describes the Spaniard as one of the ‘most underrated’ players over the last five years. Djokovic’s comments come ahead of their clash at the Western and Southern Open which has been delayed until Friday. The top seed booked his place in the last four with a dominant 6-3, 6-1, win over Jan-Lennard Struff in what is his 21st consecutive ATP Tour victory in 2020. Djokovic is yet to lose a match this year.

“First of all, his style of play is just so consistent. He doesn’t give away much at all. He doesn’t make too many unforced errors,” Djokovic said of Bautista Agut.
“You can always expect him to play at that certain level. I mean, he doesn’t drop his level of tennis much at all on any surface.’
“That’s why he’s probably one of the most underrated tennis players that we have in the last five years.”

Bautista Agut peaked at a ranking high of ninth last year and has spent almost 300 weeks ranked in the world’s top 30. The 32-year-old is yet to contest a Grand Slam final but has won nine ATP titles and earned almost $13M in prize money.

The world No.12 set up a showdown with Djokovic after wearing down 2019 champion Daniil Medvedev 1-6, 6-4, 6-3, on Wednesday. Producing a performance that the 17-time Grand Slam champion says reminded him of his loss to Bautista Agut at the Miami Open last year.

“That’s what he does. He slows you down. He kind of wears you down and tries to, in a way, if I can use that term, suffocate you on the court and just wait for his chances, and then he takes it,” said Djokovic.
“Mentally, he’s also very strong. He’s resilient. He’s just consistent all around. His win against an in-form Daniil Medvedev today was impressive. I’m sure it’s going to be a great challenge for both of us.”

It isn’t just Djokovic, who has an admiration for his fellow player. Former world No.1 Andy Murray also described him as ‘one of the most underrated players’ on Instagram and Medvedev described him as a constant threat on the Tour. Although the Russian believes there is something missing in his game.

“He‘s really solid. He knows what he’s doing on court. He knows how to win matches. He wins a lot of matches every year. So he knows his strengths, he knows his weaknesses, so he tries to play with it,” Medvedev explained.
“He’s a smart guy on the court. I mean, he’s been a top player for years. So for sure he’s going to win against many top guys. Sometimes he’s going to lose also, because he isn’t top 5 or played in a final of a slam or won a slam, so there is something he’s missing, but he can of course cause a lot of problems.”

Djokovic leads Bautista Agut 8-3 in their head-to-head but has lost to him in two out of their three most recent meetings.