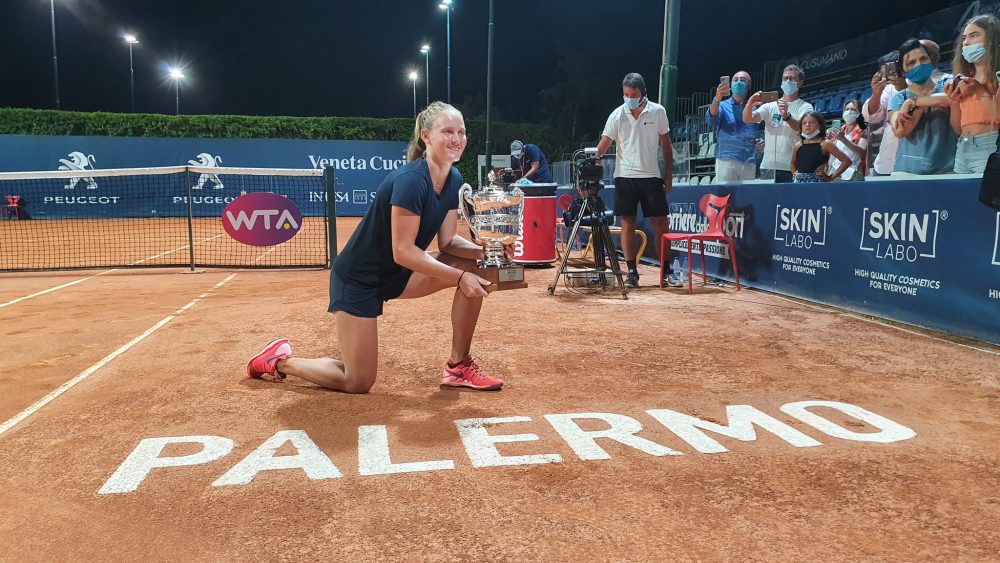 France’s Fiona Ferro will rocket up the world rankings to a career best of 44 on Monday after claiming her second WTA title at the Palermo Open.

The 23-year-old unseeded player roared her way to a 6-2, 7-5, win over Estonian fourth seed Anett Kontaveit who is currently ranked 31 places above her on the Tour. Producing a series of blistering shots from both the forehand and backhand side, Ferro was relentless throughout the at times roller-coaster 103-minute encounter. Hitting a total of 51 winners to 24 unforced errors and converting five out of her seven break points.

“It was a very tough match, very close. Anett is a very consistent player and I had to fight for every point,” Ferro said during the trophy ceremony.
“At 3-5 in the second set I just had to keep fighting for every point.” She added.

Playing in only her second WTA Final and first since July 2019, Ferro got off to the perfect start by breaking Kontaveit in the very first game of the match. Continuing to weather the storm, the Frenchwoman had all the answers to the questions her opponent asked of her during the opener. Breaking once again en route to clinching the opening set after 42 minutes of play.

Ferro didn’t have it all her own way with the second set seeing her being forced to come back from behind twice. At one stage it looked as if proceedings would be heading into a decider as she trailed 3-5, 30-30. Nevertheless, Ferro managed to battle back with the use of some more heavy hitting. Finishing the match off with a four-game winning streak, she triumphed on her first championship point after a Kontaveit return drifted beyond the baseline.

“Congratulations to Anett on a great week and congratulations to your coach as well. I wish you the best of luck in the next tournament and in the future,” the new champion said in tribute to her rival.

Prior to this week Ferro hadn’t won back-to-back matches on the Tour since the US Open last year. However, she has managed to regain her form during the five-month break by participating in a series of exhibitions organised by her federation. Where she won 10 matches in a row. Although it is her latest victory that is the most notable against Kontaveit, who last lost to a player outside of the top 50 at the 2019 Wimbledon Championships.

“It’s been so exciting that all of our people came to watch and I’m so thankful. I was really excited to play today,” said Kontaveit.
“I would also like to thank my coach for being with me always and supporting me. Not the result we wanted today but we will make it next time.”

After a mixed start to 2020 that saw Ferro win just four out of nine matches played over four tournaments, she is hoping Palermo will elevate her to more success in the future. She is currently entered to play at the Prague Open, which will start on Monday. In the first round she has been drawn against Spain’s Aliona Bolsova with a potential clash with Dayana Yastremska lurking in the second.

“I don’t want to speak so much about the rankings. My goal is to keep working as hard as I always do and bring home more trophies,” she stated.