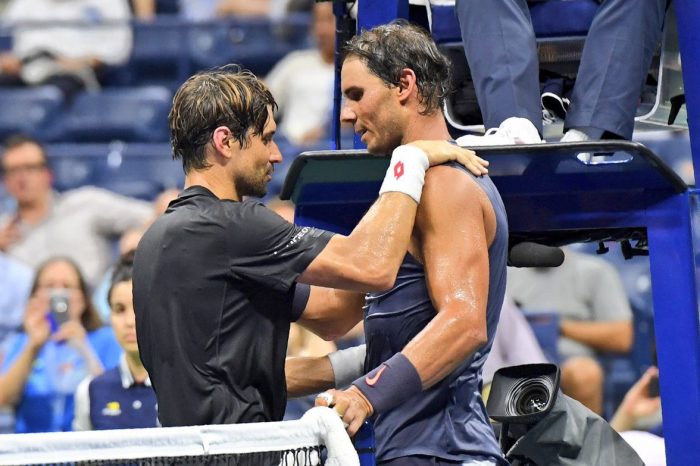 World No.1 Rafael Nadal has hailed compatriot David Ferrer after the Spaniard played the final grand slam match of his career at the US Open.

Nadal took on Ferrer for the 31st time in his career on Monday, but their meeting ended in retirement. Leading the match 6-3, 3-4, Nadal was given the win after his opponent called its quits due to a calf injury. The retirement is the end of an era for Ferrer, who said the US Open will be the final major tournament he plays in.

“I thought it was going to be a tough match because he’s always a very good competitor.” Nadal said of his rival.
“I was thinking that it will be his last match, he will probably come on court to enjoy, play with the right intensity. I think that’s what he did. I think he was playing well.”
“I’m very sad about what happened to him in his last match probably at a Grand Slam. He deserved a better finish.” He added.

36-year-old Ferrer ends his grand slam journey with 63 appearances in the main draws. He made his debut back at the 2003 Australian Open. Since then, he has won 145 out of 208 matches played in the majors. His best result occurred at the 2013 French Open when he finished runner-up to Nadal.

“I reached my first semifinal in a Grand Slam at the US Open in 2007. I have really good memories.” Ferrer reflected.
“It was special because I finish my last Grand Slam playing on the centre court with Nadal, because he’s a very good friend.”

Reflecting back on the career of the former world No.3, Nadal’s fondest memories of their time on the court occurred in the Davis Cup. Together they guided Spain to the title in 2009 and 2011. Spain has won the title five times since 2000. Ferrer has played in a total of 20 Davis Cup ties throughout his career.

“We played some important Davis Cups together.” Nadal said.
“This year we had a very emotional one (tie) in Valencia where he (Ferrer) won the fifth point with that amazing match against Kohlschreiber. It was a great one.
“I think maybe the 2011 final against Argentina in Seville was one of the most beautiful. Both of us were playing at a good level.”

Ferrer is expected to end his career next May on home soil at the Madrid Open. He has won 27 ATP titles, recorded 53 wins over top 10 players and ended seven seasons in the top 10.

“I think he will be one of these guys that the tour will miss because he is one of the players that is a good guy. The tour loves him.” Nadal concluded.

The world No.1 will take on Vasek Pospisil in the second round at the US Open.

Related Topics:David FerrerFeaturedRafael Nadal
Up Next