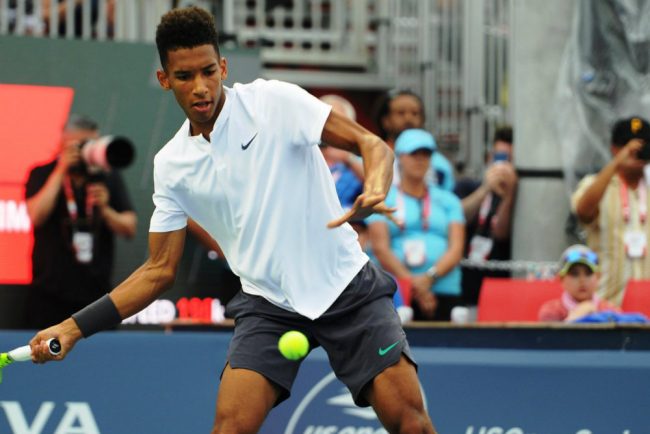 Canadian world No.117 Felix Auger Aliassime has suffered heartbreak in his first ever grand slam main draw at the US Open.

The 18-year-old qualifier was taking on compatriot Denis Shapovalov on the opening day of the competition. Both players illustrated their best tennis with the match a set apiece before Auger Aliassime started to look visibly distressed. Trailing 1-3 in the third set he took a medical time out and told the doctor that his heart was racing. Despite efforts to cool him down on what was a humid day, he was forced to retire 5-7, 7-5, 1-4. Leaving the teenager in tears as he was consoled by his teammate on the court.

“Obviously it’s tough how it ended. But I think this match, it’s great for Canadian tennis, two young guys that are coming up that have grown up together playing against each other.” Shapovalov said after the match.
“It’s really good. I feel that’s the reason why so many Canadians are picking up tennis racquets. Honestly, it’s great when these matches happen.”

Heartbreaking scene in New York as Felix Auger-Aliassime retires after heart issues at the #USOpen.

Starts to cry as he comes together at the net with his Canadian friend and teammate, @denis_shapo pic.twitter.com/Ik4wc3FQCM

During an interview with TSN.ca, Auger Aliassime said that he started to feel heart palpitations during the match shortly before retiring. Many players struggled with the humid conditions in New York and the heart rule was in force for the women’s game as the temperature exceeded 32.1 degrees on the court. There is no sure rule in place for the men.

“After the second set I started to feel a fast heart rate and some palpitations. Something I have experienced before.” Auger Aliassime explained
“We (his team) are not quite sure of the reason yet, but we will look deeper into that. I was hoping that it would go down so I could finish the match, but it was impossible for me to keep going with signs of dizziness.”

It is not the first time the Canadian has suffered from heart issues. In the past, he has been diagnosed with tachycardia. A condition where the heart beats faster than the normal rate. Auger Aliassime’s coach, Guillaume Marx, told Ubitennis earlier this month that it is ‘rare’ for the condition to affect his tennis.

“We believe the condition is linked to his growth and it is going to disappear with time.” Said Marx. “Episodes have been extremely rare during the past two years, so we don’t need to do anything specific. Of course, we try to be careful when we see he is tired, but nothing more than that.”

Shapovalov’s clash with Auger Aliassime had a combined age of just 37. Making it the youngest match played at the US Open since 19-year-old Novak Djokovic played 17-year-old Donald Young in 2006. The 28th seed will play Italy’s Andreas Seppi in the next round.