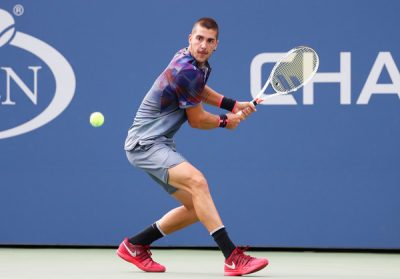 The world number 209 revealed that he nearly quit playing tennis after his mental struggles when he returned to the court in May.

The talented Australian had just recovered from shoulder surgery in May last year and was ready to return to the ATP tour. However in a recent interview with Adelaide Now, Kokkinakis revealed that he nearly quit Tennis and was close to taking up another sport:

“I didn’t feel like I had done anything to reward myself. I said to my coach ‘I’m going to use my protected ranking and see where we are at.’ If my game’s no good and my body’s no good then I might need to take a break and find something else, something that I enjoy.”

This is a shocking revelation from the Aussie as it didn’t come across like that on his comeback, when he tested Kei Nishikori at Roland Garros on his second tournament. Kokkinakis also reached his first ever ATP World Tour singles final in August, where he lost to Sam Querrey in Mexico.

Kokkinakis also revealed that he struggled to adapt to a competitive environment upon his return to the court, “I just felt lost on the court. I had no idea what I was doing, I didn’t know how to a construct a point. I was in a dark place.”

The Australian will start his 2018 season in Perth for the Hopman Cup, before playing at the Australian Open for the third time in four years.

Related Topics:Thanasi Kokkinakis
Up Next