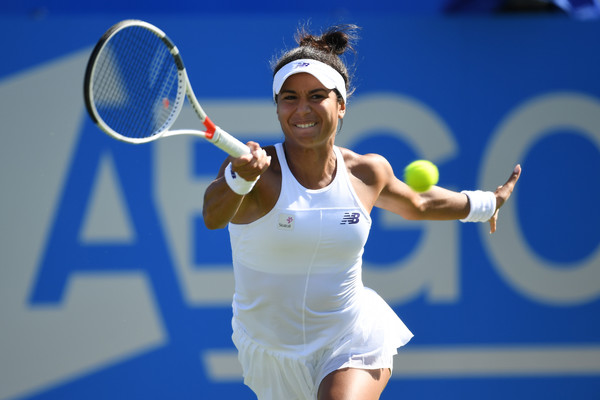 Heather Watson defeated two players ranked over 100 places higher than her in the WTA world rankings in one day, finishing with a 6-1, 1-6, 6-4 win over Barbora Strycova to reach the semifinals at the Aegon International in Eastbourne.

The British number three came through a topsy turvy quarterfinal match in two hours, recovering from a break down in the final set to see off Strycova to become the second Brit to reach the last four.

World number 23 Strycova led their head to head 3-1 and won their last meeting, which came on the grass in Birmingham last year 7-5, 6-4, but it was to be Watson’s day here by the seaside in Eastbourne.

Watson booked her place in the last eight after securing another highly credible victory over a seeded opponent. 14th seed Anastasia Pavlyuchenkova was her latest victim, with the British number three winning 6-4, 6-3 in one hour and 24 minutes out on Court 4. Her quarterfinal opponent, also unseeded at the Aegon International, Strycova, defeated lucky loser Lauren Davis 7-5, 6-2 to set up this early evening clash on Court 1.

The British number three got off to a fast start and was supported by a packed out crowd. Watson secured a break of serve in the fourth game of the match with an excellent backhand winner down the line and swiftly established a 4-1 lead, with the Brit dictating the early exchanges.

The Czech struggled to make an impact in the match or make her opponent feel uncomfortable out on court in any way as Watson struck a cross court forehand winner to set up break point. The Brit duly took the opportunity with another effective short cross court forehand and secured a double break. Watson had no trouble closing it out, holding to love to secure the first set in emphatic style to close in on a semifinal place.

The opening game of the second set was a tussle and the longest of the match so far. Strycova staved off two break points but then squandered two chances to hold of her own. Watson had another chance to secure a break and make it six games in a row, but the Czech clung on and held serve to try and curb the Brit’s momentum.

Having saved those break points, the world number 23 grew in confidence and broke Watson in the next game, swiftly establishing a 3-0 lead to leave the Brit contemplating those missed opportunities in the first game of this set.

The match completely turned around and became The complete opposite of the first, with Strycova racing into a 5-1 lead. The Czech brought up two set points but Watson remained focussed, saving both to keep her hopes of a straight sets win alive. A forehand down the line winner brought up break point but a netted volley let the chance slip by. After a slight blip the world number 23 regrouped to make for a remarkable turnaround as she took the second set 6-1.

Watson’s hopes of a second semifinal on home soil of the year and a first on the WTA Tour faded fast as Strycova broke the Brit once again in the third game of the final set. The Czech held on to lead to close in on victory up 4-2.

It was at that moment when the Brit bounced back and got the crowd renegagaed. Watson claimed four games in a row, closing with a forehand cross court passing shot winner to continue her best run at a WTA Tour level tournament this year.

Watson will face Caroline Wozniacki in the first semifinal of the day on Friday after the Dane recovered from a set and a double break down to see off second seed Simona Halep 5-7, 6-4, 6-1 in another terrific battle.