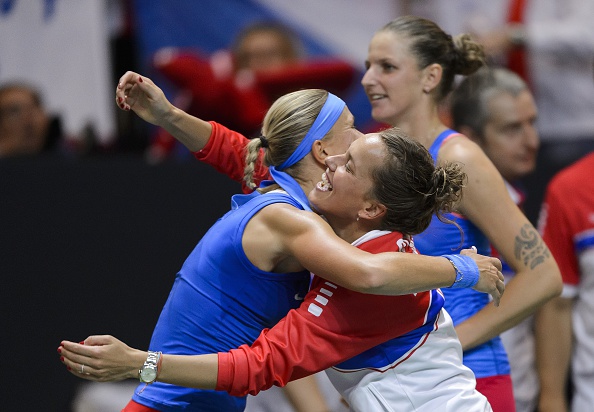 The Czech captain Petr Pala commented on the dramatic win and why does he think they came out on top today.”It was sensational the way they played. The key was the depth of our team today. It gave me more opportunities to make the doubles team. It is a great feeling for the camp. The spirit is there, everybody wants to win the cup.”

Bacsinszky and Pliskova have failed their duty as team No. 1 to take the win, but after getting upset, they had to get their heads back in the game for a mutual match. Bacsinszky was playing a lot better than yesterday, but it still wasn’t enough to defeat the tall Czech. The first set was very level, neither of the players were dominating. However Bacsinszky had break points at 1-0 and 2-1 which she didn’t confirm. Pliskova then finally got the first break in the match at 4-4. Pliskova successfully ended the first set with an ace and took the lead. Pliskova exposed Bacsinszky’s second serve really well, causing the Swiss to win only 29% of points after her second serve, while Pliskova won 84% of points on her first serve.

Bacsinszky’s service and overall performance then just dropped, allowing Pliskova to get two early breaks and a lead of 4-0. Pliskova didn’t choke away the match, end kept her focus as both players held. Bacsinszky’s percentage of points won after first serve dropped to 46%, while Pliskova was at 100%, winning all 12 points on first serve. Pliskova also did a great job of pushed Bacsinszky into mistakes. The Swiss produced 16 forced errors in the second set alone.

After her match, Pliskova said: “Obviously yesterday was a tough match and tough day for me because I didn’t expect to lose this one. Even physically I was a little bit down. I just had a good dinner, went to sleep and woke up on a new day with new energy and just tried to do my best.”

Viktorija Golubic played a must-win match against Barbora Strycova. Both players managed to pull of the upset on Saturday, and met in this crucial tie. Strycova put out a solid game in the first set, taking it 6-3 after a little bit of trouble in the final game, having to use 5 set points.

The second set was again very level, but was starting to get crazy in the end, as a string of 4 breaks in a row from 4-4 led to a tiebreak. Golubic had two opportunities the serve the set out, but didn’t even get a set point in either of them, so the match led to a tiebreak. The tiebreak was very level with only 3 breaks of serve, but Golubic came out on top in the second set, winning it after 74 minutes.

In the third set, Strycova started to show visible signs of fatigue, and her performance level started to decrease, while Golubic kept on. Golubic was just near perfect, winning 90% of points on first serve, getting 11 winners while making only 2 unforced errors. Golubic won the third set dominantly 6-1, and after 2 hours and 33 minutes sent the tie into deciding doubles.

Viktorija Golubic had to come back for doubles, due to Switzerland missing a player on their team. Golubic played with the World No. 1 Martina Hingis. Their opponents, representing Czech Republic were Lucie Hradecka and Karolina Pliskova. The Czechs were the dominating power in the doubles, as the Swiss team struggled on serve. The first break came on Hingis’ serve at 2-2. From there Hradecka and Pliskova won 3 more games to take the first set in 28 minutes. The Czech team played a very fast game, made it hard to get into rythm.

Lucie Hradecka made the observation as well: “I am happy with how we played,” Hradecka said. “Maybe I expected a closer match but I know if we play fast and we don’t give them a lot of time, it would be an advantage for us. It was great and I really enjoyed it.”

The second set was also controlled by Czech Republic, getting a break in the first game. Czechs broke again for 5-2, and Hradecka got to serve the match out, taking the first match point, as Hingis put the running forehand into the net.

Despite the loss, the Swiss captain Heinz Guenthardt tried to focus on the positives: “I am very proud of my team. We left everything out on the centre court and I don’t there there is any question or any doubt in anyone’s mind that we did that. You can’t ask of a team anything more than that.”

The opponent of the Czech Republic in the final will be France, defeating Netherlands in the final doubles rubber as well.