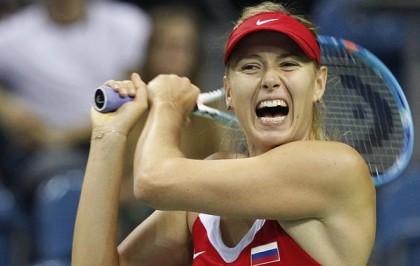 Maria Sharapova beat Karolina Pliskova 6-3 6-4 in 89 minutes to level the Fed Cup tie at 1-1 after the first two matches at the O2 Arena in Prague.

Both players held serve in the first five games. At 3-2 Sharapova brought up a break point in the sixth game with a drop shot for 15-40. The Russian legend got the break to take a 4-2 lead after a double fault by Pliskova who won just 30 percent of her first serves. Pliskova broke straight back in the next game as Sharapova made three double faults.

Pliskova, who is playing her second Fed Cup tie and is making her first appearnce in this event on home soil, broke serve in the second game of the second set to take a 2-0 lead but Sharapova broke straight back before consolidating the break to draw level to 2-2.

Sharapova fired 28 winners to 25 unforced errors and won eight points at the net.

“It’s an incredible atmosphere. You see a lot more Czech flags than Russians but in my mind I see red, white and blue and I turn it in my mind as the Russian flags”, said Sharapova.

Sharapova will take on Petra Kvitova in the first reverse singles rubber on Sunday. In the second Sunday match Pliskova will face Anastasya Pavlyuchenkova.

“I think it is very open. It’s a completely even tie. The Number 1 players from each team are favourites so we will have to see how they handle it”, said Czech captain Petr Pala

The German battled valiantly to record his third consecutive win over a top 10 player in Madrid and clinch the title for the second time in his career.

Fifth seed Alexander Zverev battled back from two games away from defeat to oust Matteo Berrettini in a marathon clash to win the Madrid Open.

The US Open finalist was pushed to his limits both mentally and physically en route to a 6-7(8), 6-4, 6-3, win over the world No.10 after more than two-and-a-half hours of play. Making it the first time in his career he has won a title on the ATP Tour after dropping the opening set. He now leads Berrettini 3-1 in their head-to-head. In their latest encounter the German hit five aces and 16 winners en route to his 15th ATP trophy and fourth in a Masters event.

The Italian is currently on an eight-match winning streak after what has been a bumpy start to the year. 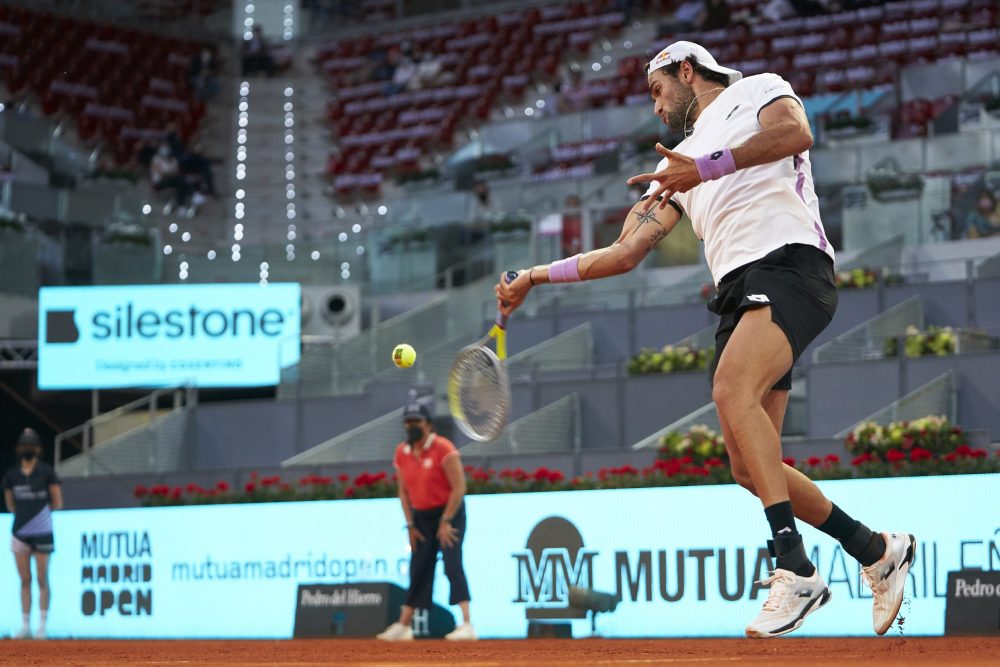 Matteo Berrettini is a win away from his maiden Masters 1000 title at the Madrid Open during what has been a roller-coaster journey on the Tour this season.

The world No.10 started 2020 in good form with high-profile wins over Dominic Thiem, Gael Monfils and Roberto Bautista Agut at the ATP Cup. Then at the Australian Open he reached the fourth round for the first time in his career before disaster struck. An abdominal injury forced him to pull out of the Grand Slam and would eventually result in Berrettini being sidelined from the Tour for almost two months.

However, since returning to competitive tennis last month the 25-year-old has managed to win eight out of nine matches played on the clay prior to the title match in Madrid. His only loss was in Monte Carlo to Alejandro Davidovich Fokina.

“I worked really hard in my pre-season, but I wasn’t feeling like really, really good on the court. But I knew that the work that I’ve done eventually would have paid off somehow,” Berrettini told reporters on Saturday.
“I have to say that since I went to Australia and I started quarantine, the practice and stuff, with my coach we said, ‘Okay, I’m playing good, I’m good.’
“Sometimes it is a matter of mental performance or just that your confidence is building up.”

Berrettini, who reached the semi-finals of the 2019 US Open, credits his team for aiding a growth in his confidence. One particular member he has high praise for is his manager Ivan Ljubicic. A former world No.3 player from Croatia who is a coach for Roger Federer. The Croat has his own management, sponsorship and consulting agency called LJ Sports Group which Berrettini is a member of.

“My manager, Ivan Ljubicic. He helped me in a way. He just told me he really believes in me. That kind of stuff helps, especially because it’s coming from someone who had an unbelievable career. It really helped me in that way,” he said.

Standing in Berrettini’s way of his first Masters 1000 title is former champion Alexander Zverev who is yet to drop a set in the tournament. He is 7-9 against top 10 opposition so far in his career and his first win over a top-10 opponent was Zverev on the clay back in 2019 (in Rome). However, he has lost his two other meetings against the German.

“It’s going to be a challenging match, but I’m in the finals. I guess the best two guys are going to play each other,” he concluded.

Berrettini is only the third Italian man to reach a Masters final since the series was created after Fabio Fognini and Jannik Sinner. 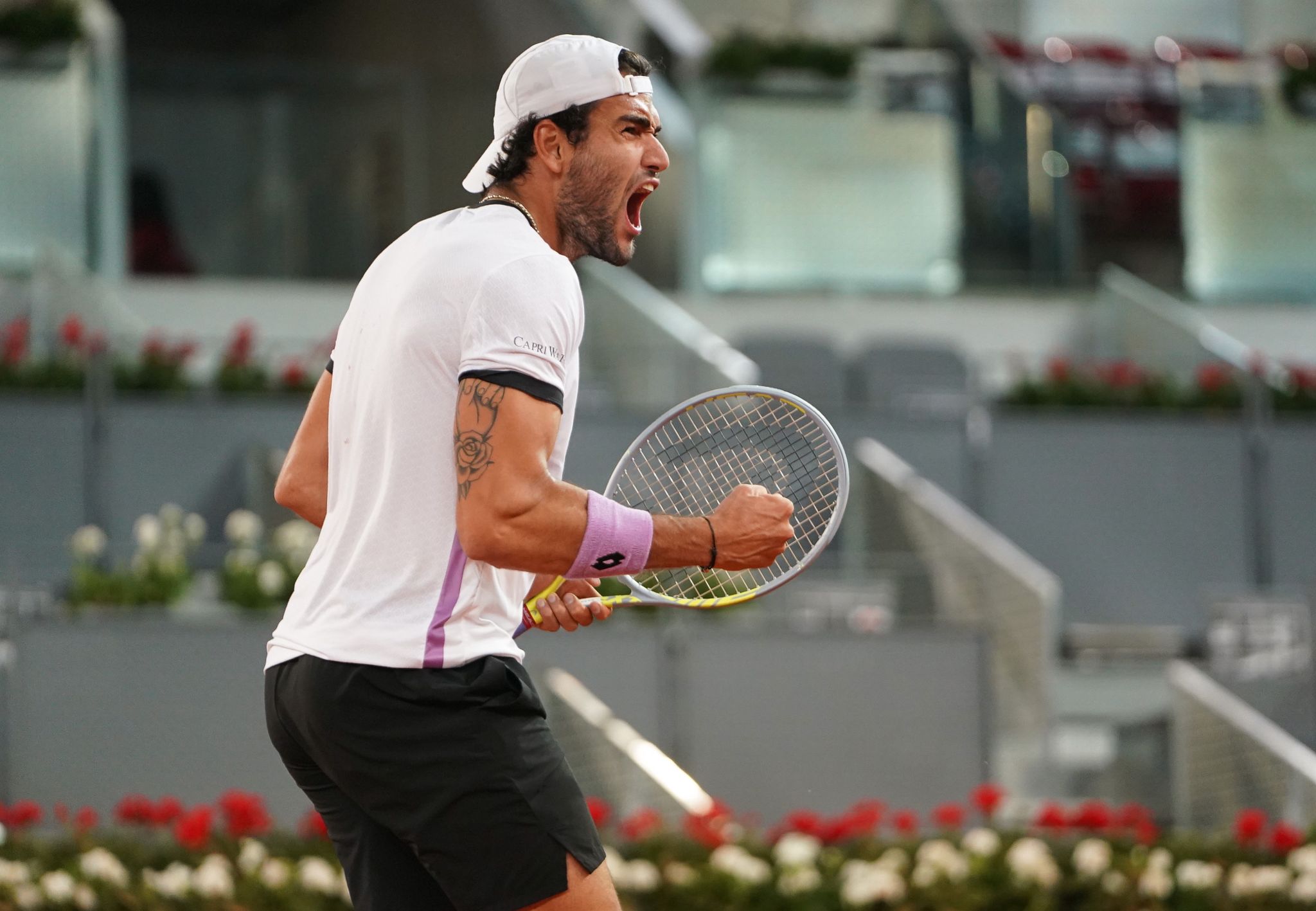 Italian No.1 Matteo Berrettini, on Saturday in Madrid (twitter.com/MutuaMadridOpen)

Three years ago in Madrid, Sascha Zverev won this event, defeating Dominic Thiem in the final.  That was Zverev’s third Masters 1000 title, all earned within one year.  Sascha’s results at Majors have progressed since that time, though Sascha is yet to achieve his fourth Masters title, despite reaching three further finals.  The 24-year-old German has not dropped a set this week, which includes noteworthy back-to-back victories over the two best clay court players of the last five years: Rafael Nadal and Dominic Thiem.

Three years ago in Gstaad, Matteo Berrettini won his first ATP title, and his first of three on clay.  The 25-year-old Italian has claimed a total of four 250-level titles, including one just two weeks ago in Belgrade.  But this marks Berrettini’s first time advancing to the final of an event outside the 250 Series, though he notably reached the semifinals of the 2019 US Open.  Matteo has taken eight of nine sets played this week, and came back from a set and a break down in the quarterfinals against Cristian Garin, winning the last 11 games of that match.

Zverev leads their head-to-head 2-1, though they’ve split their two clay court encounters.  At the 2018 Rome Masters, Zverev prevailed.  A year later at the same event, Berrettini prevailed.  Their only other meeting took place at the 2019 Shanghai Masters, which went to Sascha.  All three of their matches have been decided in straight sets.

Including his victories this week over Nadal and Thiem, Zverev is now on a three-match winning streak against top 10 opposition, ending a streak of five consecutive losses against the top 10.  Berrettini has only played two matches against the top 10 since the 2019 ATP Finals, as injuries have forced him to miss significant time from the tour.  Despite that, he’s now 16-3 this season, and currently on an eight-match win streak.

Zverev certainly has the experience edge in matches of this caliber, and has a bit more variety in his ground game, specifically his backhand.  Berrettini will look to dictate play with his powerful forehand.  Both players are capable of racking up a high ace tally, though Sascha’s second serve can be a recurring weakness.  While we’ve had two consecutive Masters events with first-time 1000-level champions crowned, Zverev should be favored to win his fourth Masters title, and his second in Madrid.

The men’s doubles championship will also be decided on Sunday.  Mektic and Pavic are 32-3 in 2021, and looking to win their sixth title of the season.  A few weeks ago in the Monte-Carlo semifinals, they defeated Granollers and Zeballos in a deciding set tiebreak.