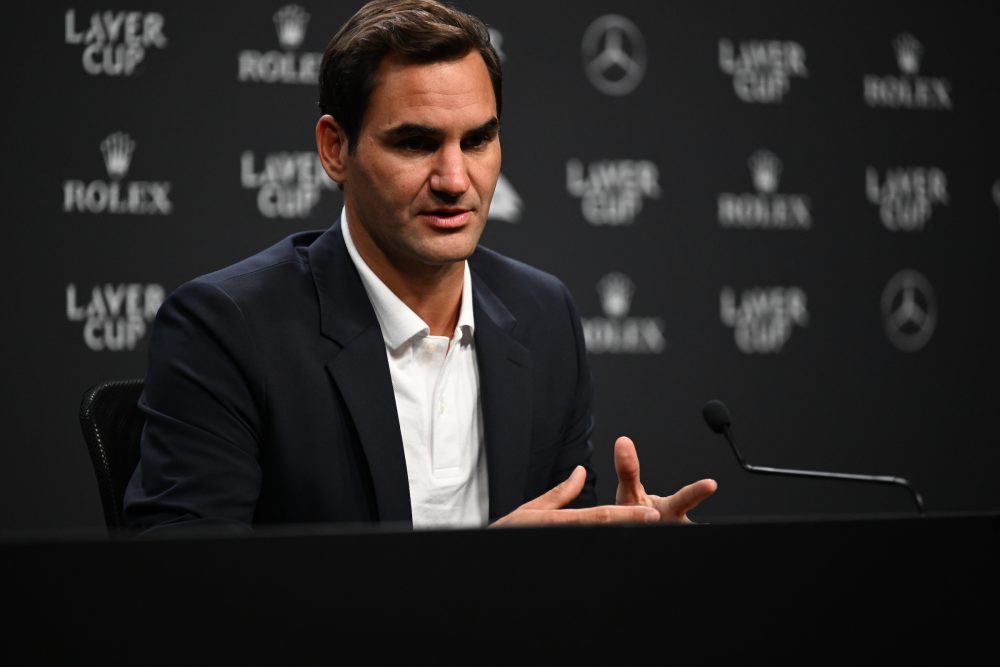 Roger Federe has assured his army of fans that he has no plans to become a ‘tennis ghost’ as he prepares to play the final match of his illustrious career.

The Swiss 41-year-old announced last week that he will be retiring at the Laver Cup after playing on the Tour since 1998. His decision ends one of the most successful careers in the history of tennis. He has won 103 Tour titles, including 20 Grand Slams, and holds the record as the oldest ATP No.1 in history.

Earlier this week Federer confirmed that his farewell match will take place at The O2 in London on Friday where he will participate in a doubles match on the first day of the Laver Cup. It is still to be confirmed who he will play alongside but long-time rivals Rafael Nadal and Novak Djokovic are the most likely players he will partner with.

Whilst he is stepping into the world of retirement, a grateful Federer says he has ‘fallen in love with too many things’ to completely vanish from the sport. Hinting that he will continue to be a prominent figure over the coming years in some capacity.

“I just wanted to let the fans know I won’t be a ghost. It’s funny, I spoke about Bjorn Borg, he didn’t return to Wimbledon for 25 years and that hurts every fan,” Federer told reporters in London on Wednesday.
“But I don’t think I’ll be that guy. I feel tennis has given me too much. I have been around the game for too long. Have fallen in love with too many things.
“You’ll see me again. In what capacity, I don’t know. Still have to think about it a little bit, give myself some time.”

It remains to be seen how Federer might remain involved in the sport. Although his Team8 management company is the co-founder of the Laver Cup. Furthermore, during a recent interview with the Swiss newspaper Tages Anzeiger, he expressed an interest of potentially going into broadcasting.

“I never thought I would say this but six months ago I suddenly thought (about) commentating on tennis someday. Who knows? Although I always said I would never do that,” he said.

The decision to retire has been a process in the making for the former world No.1 who hasn’t played as a match since his quarter-final loss at Wimbledon last year due to a knee injury.

“It was about time that I retired. I think a moment like this doesn’t come overnight. It was a process – an emotional one – which at the end I thought we managed well, with the family, the team, my closest friends,” said Federer.
“It all worked out and here we are now at the Laver Cup. But it was definitely more a highly unusual last few weeks for me.”

Federer continues to have limitations due to his knee. Hence why he is pulling the curtain on his career at the Laver Cup instead of the Swiss indoors in his native Basel which will take place in October. Under the current arrangement, he has agreed to play once in a doubles match on Friday in the Laver Cup before Matteo Berretini takes his place in the competition.

“It is clear that the most beautiful thing would be to play doubles here with Nadal, because it has been my great rivalry,” he said.

Although London remains a city close to Federer’s heart. The venue of the Laver Cup is where he has won multiple ATP Finals titles, as well as its close location to Wimbledon which Federer has won more times than any male player in history.

“I think it’s going to be great just because the city has given me two World Tour Finals victories here to close out an incredible year that I probably already had those years. And then down the road at Wimbledon winning there eight times plus juniors.” He said.
“This city and its fans have given me a lot so I thought it was fitting to end it here. I will not stop playing tennis, it’s just I will not play for points any more. I will keep on playing with my children, with my friends, hope to play exhibitions in the future and just still keep on promoting the game and playing in places I’ve never played before. So I’m really looking forward to that as well in the future.”

During his career Federer spent a record 237 consecutive weeks as world number one from 2004 to 2008.