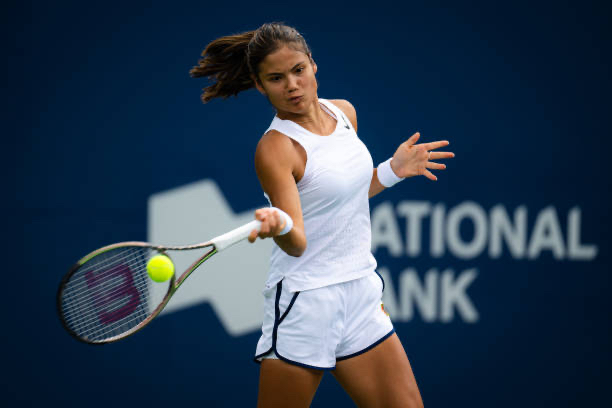 Ahead of her US Open title defence in a couple of weeks, Emma Raducanu remains unfazed about her potential drop down the rankings.

Emma Raducanu is set to defend her US Open title in a couple of weeks after winning her maiden grand slam title as a qualifier last year.

The Brit will have 2,000 points to defend and an early exit risks a huge rankings drop in what has been a big experience for the 19 year-old this year.

Raducanu enters the last grand slam of the year without form or momentum on her side having only won back-to-back matches at three events this year.

“I just think that everything that’s happening right now has probably just meant to be in my journey and I need to go through those development stages at some point because I did miss them. I went from playing 25ks to winning the US Open.”

Raducanu’s rise has been incredibly quick and the Brit will be anticipating that anything can happen over the next few months in terms of her development.

Defending the grand slam is huge pressure and it will be interesting to see if returning to the US Open will inspire her to raise her level.

Before Raducanu goes to the US Open, she competes in Cincinnati and faces 23-time grand slam champion Serena Williams in her opening round.

Williams is currently on her farewell tour and Raducanu admits it’s going to be an unforgettable experience to play her, “I think it’s gonna be an exciting match. I’m looking forward to it,” Raducanu said.

“It’s an amazing opportunity to play probably the best the best tennis player of all time. It’s probably going to be my last opportunity to ever play her. I think that, for our careers to have crossed over, I think I’m really fortunate that I get to play her.

“Whatever happens, I think it’s gonna be a really good experience for me and something that I will remember for the rest of her life.”

The match will now likely take place on Tuesday after originally been scheduled for Monday evening.

Related Topics:ATP cincinnatiEmma Raducanu
Up Next