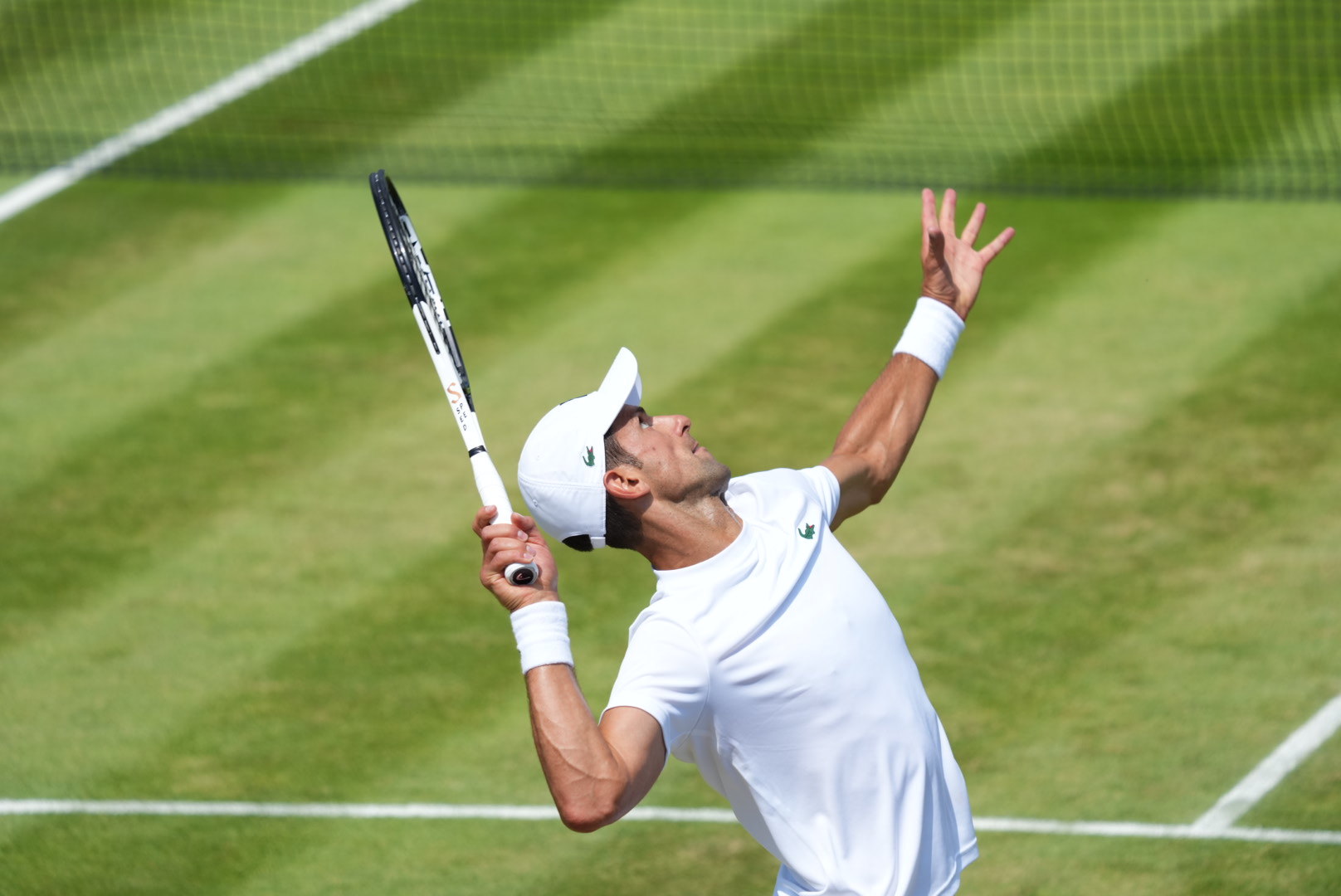 Novak Djokovic practicing this week at The Championships (twitter.com/wimbledon)

On Sunday, Novak Djokovic will play in his eighth final at Wimbledon, and his 32nd at a Major.  He is 6-1 in the gentlemen’s singles championship match at SW19, with his only loss coming in 2013 at the hands of Andy Murray.  Novak has claimed his last five finals at The Championships, with victories over Roger Federer (3), Kevin Anderson, and Matteo Berrettini.  At Slams, Djokovic has taken eight of his last 10 finals, though he lost his most recent one, at last year’s US Open, to Daniil Medvedev.

For Nick Kyrgios, this is a first singles final at a Major.  He previously achieved two Slam quarterfinals, though those both occurred over seven years ago.  But he did win a Major title in doubles six months ago at his home Major alongside close friend Thanasi Kokkinakis.  Kyrgios is 6-3 lifetime in singles finals, and has won his last three, though this will be his first in nearly three years.

Also on Sunday, the ladies’ doubles championship match will be played, and it is a blockbuster final featuring the top two seeds.

These two men historically have not gotten along.  Ubitennis editor Adam Addicott outlined much of that history here.  As recently as last year’s Australian Open, Djokovic said of Kyrgios, “Off the court, I don’t have much respect for him.”  Yet as of late, they seem to have a budding friendship, after Nick was one of the few players to speak out in Novak’s favor during the deportation debacle prior to this year’s Australian Open.  On Saturday, they were even on Instagram discussing the idea of going out for drinks together after Sunday’s match, in one of 2022’s most surreal moments.

Djokovic of course has a vast edge in experience, but does not have the advantage in their head-to-head.  Kyrgios is an undefeated 2-0 against the 20-time Major champion.  Both of those matches occurred within a few weeks of each other in 2017.  At both Acapulco and Indian Wells, Nick prevailed after two tight sets.  However, that was during a considerable dip in Novak’s results.  Also, those were both best-of-three matches, and defeating Djokovic in best-of-five is currently one of the sport’s biggest challenges.  As per Tennis Abstract, Novak is an outstanding 36-10 in five-setters, and has won his last seven.  But if the match does go the distance, it’s worth noting Kyrgios is 11-3 in five-setters, and 6-0 at Wimbledon.

Both players survived five-setters during this fortnight to reach this stage.  In the quarterfinals, Djokovic came back from two-sets-down to take out Jannik Sinner.  And Kyrgios prevailed in two five-setters, over Paul Jubb and Brandon Nakashima.  Yet both men should be fully fresh for this final.  Novak only required two-and-a-half hours to defeat Cam Norrie in the semifinals, while Nick received a walkover in the semis from an injured Rafeal Nadal.

We know Kyrgios is capable of beating Djokovic, and the Australian’s physical conditioning is better than it’s been in years.  Grass may just be Nick’s best surface, and his serve should be even quicker than usual in the hot temperatures forecast on Sunday.  However, while Kyrgios will know he’s the underdog against the all-time great, he’ll certainly be feeling an enormous amount of nerves in his first Major final.  As much as Nick often tries to act as if he doesn’t care about his results, he very much does, and admitted to barely getting any sleep the night after he received the walkover into this final.  And that walkover may hurt his chances on Sunday, as he hasn’t played a competitive match in four days, and we’ve often seen players struggle in the round following a walkover.  Also, Kyrgios often performs better against players he despises, and this newfound mutual respect he’s found with Djokovic may not help his cause.  In a best-of-five match, Novak is the favorite to win his 21st Major, putting him just one title behind Nadal.

Elise Mertens and Shuai Zhang (1) vs. Barbora Krejcikova and Katerina Siniakova (2) – Krejcikova and Siniakova won this title in 2019, while Mertens is the defending champion, as she prevailed a year ago with Su-wei Hsieh.  And Shuai is a two-time Major doubles champion at other events.  This is only Mertens and Shuai’s second tournament as a team this season, though they’re undefeated during that time.