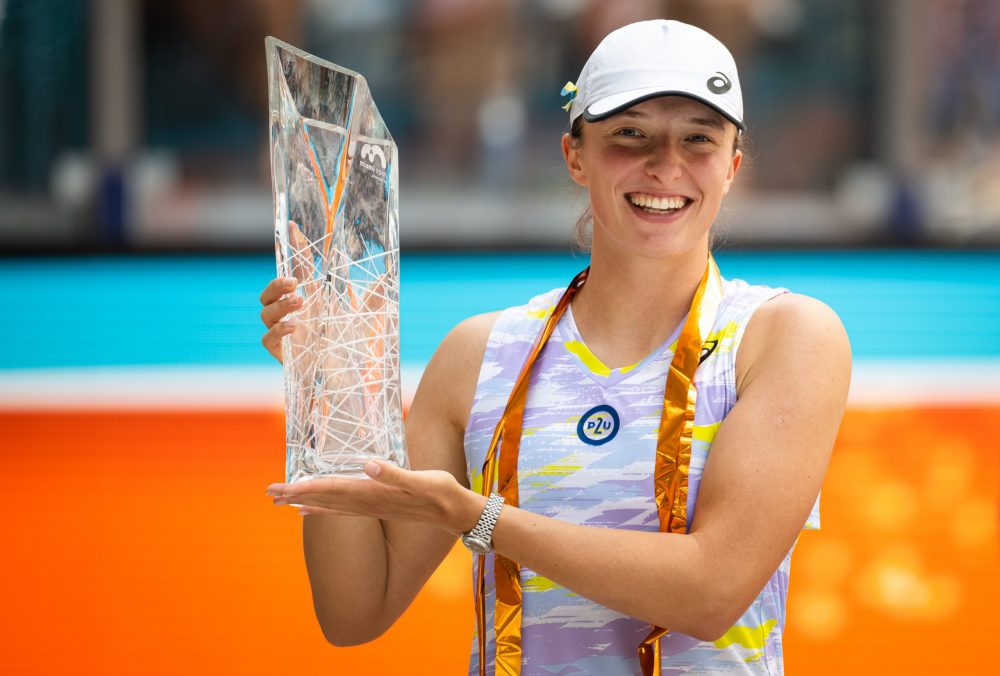 Iga Swiatek has become the youngest female player in history to win both Indian Wells and Miami in the same year after beating Naomi Osaka in the Miami Open final on Saturday.

The world No.2 was in clinical form throughout her 6-4,6-0, win over Osaka who was playing in her first tour final in 13 months. Swiatek overcame a tough opening set before running away with the match, becoming the first player to bagel Osaka since Maria Sakkari did so at the same tournament 12 months ago.

“I think putting pressure on Naomi and not letting her dictate the game. She’s a player who likes to attack and take a little bit more risk. I just wanted to (play) really lose,” Swiatek said of the tactics she used in the final during her interview with Amazon Prime.
“I was really stressed during my Indian Wells final and I didn’t want to make the same mistake (in Miami). I thought I had nothing to lose and just went with it.”

The Miami showdown was the first Tour meeting between the two in almost three years. Since then, Swiatek has claimed her maiden Grand Slam title at the French Open and is set to rise to world No.1 on Monday. A position four-time major winner Osaka has previously held for a total of 25 weeks in her career.

Billed as a dream final by some, the match lived up to expectations early on with a series of scintillating baseline exchanges and powerful ball striking from both players. Swiatek proved troublesome for Osaka immediately with the Japanese player forced to battle her way through a seven-deuce opening service game. The Pole continued to fight on court and got her breakthrough in the fifth game when a blistering backhand crosscourt winner enabled her to break for a 4-2 lead.

Working her way to 5-4, Swiatek received her first set point opportunity at the expense of an error from across the court. Prompting a frustrated Osaka to glare towards her camp. She went on to convert with the help of another unforced error from her opponent who hit the ball beyond the baseline.

Gaining momentum, the 20-year-old struck yet another blow at the start of the second frame by breaking twice in a row. From then on, Swiatek stormed towards the title with the help of a noticeable decline in Osaka’s intensity and belief on the court. Serving for the title, an Osaka backhand into the net granted her a duo of championship points and she was able to triumph on her first attempt.

“Honestly, I didn’t think that was possible,” Swiatek said about achieving the sunshine double.
“I know I keep repeating this after every tournament but right now I am trying to see what my limits are.’
“I asked my coach if he ever had a situation when your player played a final in Indian Wells and then suddenly they have to play their next match in three days. He said to me that I shouldn’t worry and that we can do it. During the tournament I believed that I actually had the energy to win.”

Swiatek has become only the third player in WTA history to have won three straight WTA 1000 tournaments in the same season after Caroline Wozniacki in 2010 and Serena Williams in 2013. She has also extended her winning streak on the Tour to a career-best 17 matches. Coincidentally the last WTA player to have won 16 or more matches was Osaka between 2020-2021.

“I want to dedicate this one (the runners-up trophy) to all the people that have supported me and my fans. I know this isn’t the outcome you wanted but I’m having a lot of fun. So I hope I can keep working hard and get more opportunities to be in a situation like this again,” Osaka said during the trophy presentation.
“I want to congratulate Iga. I was just thinking yesterday about when I had dinner with you in Australia. Just watching your journey has been really incredible and I hope you continue having fun.” She added.

Swiatek has become only the fourth woman in history to achieve the sunshine double. On Monday she will officially become the first Polish player (male or female) in history to reach No.1 in the rankings.