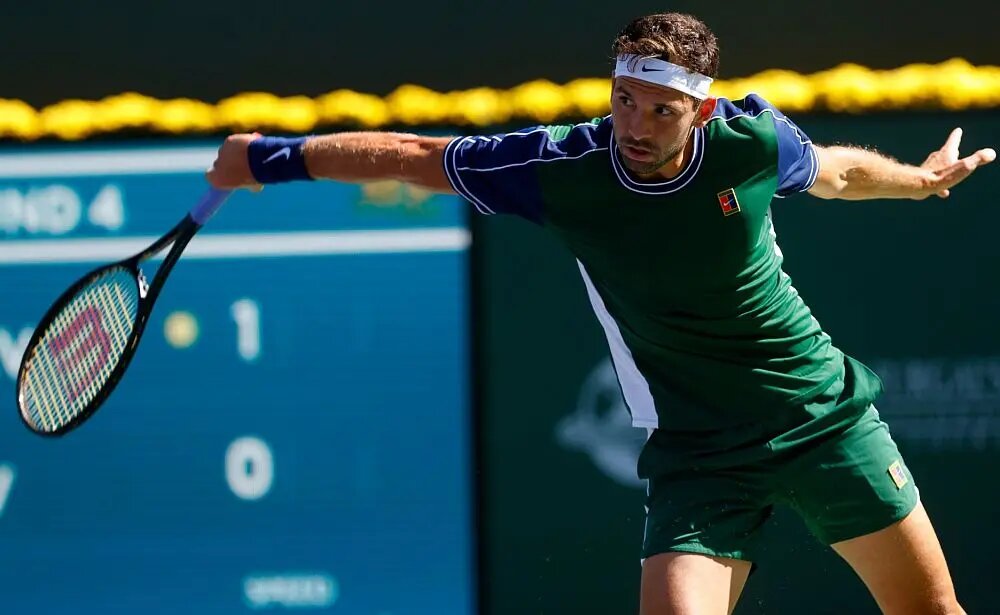 Bulgaria’s Grigor Dimitrov continued his good form as he saw off the challenge of Czech qualifier Jiri Lehecka.

He will next play boisterous Frenchman Benoit Paire in round two, which promises to be a fairly even match-up.

Lehecka, who came through three rounds of qualifying, tested Dimitrov throughout.

In the Bulgarian’s opening service game, four break point opportunities came the way of the Czech.

Some clutch serving and an exquisite backhand volley at the net, saved the critical fourth break point as Dimitrov hung on.

At 2-1 down, Lehecka served and volleyed to save two break points as the set stayed on serve.

The qualifier continued to impress as he cracked a forehand winner to level up at 3-3.

Eventually Dimitrov adapted to his new surroundings, playing on court 7 show court, as the decisive moment came at 5-4 where he finally broke Lehecka to clinch the opening set.

Dimitrov saved a break point at the beginning of the second set, as Lehecka began to apply pressure to the Bulgarian’s serve.

The point of the match soon came at one-all 40-30, as a quick flick of the wrist from Dimitrov saw him execute a fine trademark backhand cross-court winner. Lehecka was left standing and simply had no chance.

In the tennis world, the Bulgarian is seen as possessing one of the best backhands in the world alongside Roger Federer, Stan Wawrinka and Richard Gasquet.

More serve and volleying from Lehecka dug him out of a hole at 2-1 down as he saved a break point. A thumping forehand from the Czech levelled the set at 2-2.

A rare double fault at 3-3 from Dimitrov gave Lehecka the break and he closed out the set with an ace, 6-4.

In the third, Dimitrov held to love in his opening service game and broke the youngster in the second game to seal a crucial break.

With the set on a knife edge at 5-3, 40-30, Lehecka went long after a lengthy baseline exchange as Dimitrov moved two sets to one up.

The fourth set was perhaps the most compelling as both players refused to back down on serve.

At 5-4 down Dimitrov continued to serve strongly and duly held, before nailing the critical break at 5-5 with a dipping forehand winner that landed in, to the delight of his Bulgarian supporters.

The 26th seed was then taken to deuce but it wasn’t enough as Dimitrov sealed it 7-5 to move into yet another second round at Melbourne Park.

Related Topics:australian openGrigor Dimitrov
Up Next