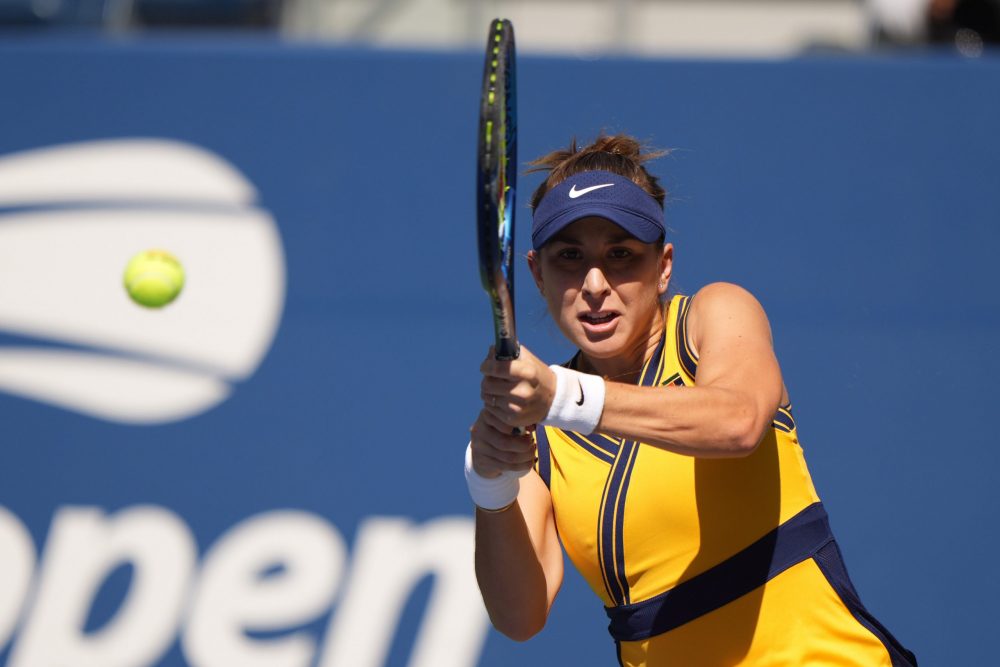 Belinda Bencic hits a backhand during a Women's Singles match at the 2021 US Open, Monday, Sep. 6, 2021 in Flushing, NY. (Darren Carroll/USTA)

The world No.12 held her nerve to prevail 7-6(12), 6-3, over the seventh seed in what is a case of sweet revenge for her. Bencic lost to Swiatek in their only previous meeting at the Adelaide International earlier this year. However, in New York, it was Bencic who had the upper hand as she battled to victory with the help of 33 winners and a winning service rate of 65%.

“In women’s tennis, everything is different every match so you can not really rely on past results. I also feel that I have improved my game a lot. So maybe for her (Swiatek) it was a bit different,” Bencic said during her on-court interview.
“I’m really happy I turned it around and I’m happy to be through.”

The opening set was full of twists with both players having multiple chances to take control of the proceedings on the Louis Armstrong Court. Bencic started the brighter of the two by breaking Swiatek in the first game of the match as she worked her way to a 5-3 lead. However, she failed to serve the set out of her first attempt which enabled former French Open champion to draw level at 5-5. Then in the following game, it was Swiatek’s chance to take the lead as she worked her way to set point but failed to convert.

It would be a marathon 26-point tiebreaker that lasted more than 20 minutes that separated the two. Bencic saw four set points in her favour come and go and also saved three set points her opponent had. Battling to a 13-12 lead, the Swiss player finally prevailed with a deep shot Switaek returned into the net. Sparking relief for Bencic and frustration for the Polish player who voiced her displeasure towards her team in the crowd.

Continuing to draw blood in the second frame, a lacklustre service game from Swiatek which ended with an unforced error granted Bencic another break to move ahead 3-1. Closing in on the victory, she triumphed on her second match point after a Swiatek backhand landed in the tramlines.

“The (first) set was so even, so I think in the tiebreak it’s always a little bit of luck. I’m very happy I won this tiebreak otherwise it would have been more difficult,” Bencic reflected. “I started the second set a bit more relaxed.”

It is the third time in Bencic’s career she has reached the last eight of the UIS Open after 2014 and 2019. She is yet to drop a set in the tournament to continue what has been a successful summer period on Tour. Since Wimbledon, she has won 13 out of 14 matches played with her only loss being to compatriot Jill Teichmann in Cincinnati. However, she is far from satisfied with her current level of play on the court.

“I feel like I am tested every match. It’s not like it’s been really easy but definitely today it was more challenging for me because she plays a very different game and for me, it’s a bit uncomfortable,” said Bencic.
“I’m still not so happy with how I played today but I think it’s a good thing, I can improve.”

Awaiting the 24-year-old in the next round will be either 18-year-old Emma Raducanu or Shelby Rogers. She is yet to play Raducanu but leads Rogers 4-1 in their head-to-head.