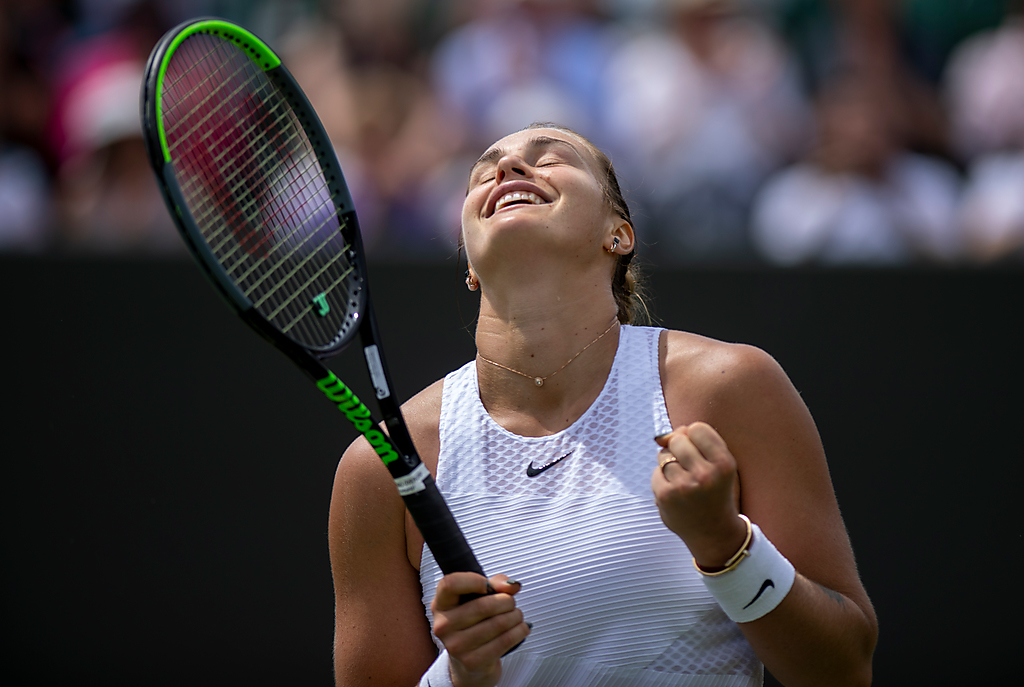 Aryna Sabalenka (BLR) celebrates her win against Elena Rybakina (KAZ) in the fourth round of the Ladies' Singles on No.3 Court at The Championships 2021. Held at The All England Lawn Tennis Club, Wimbledon. Day 7 Monday 05/07/2021. Credit: AELTC/Edward Whitaker

The world No.4 held her nerve to prevail 6-3, 4-6, 6-3, after almost two hours of turbulent play which featured continuous changes of momentum. In the end it was Sabalenka’s sheer power combined with a lapse in Rybakina’s mentality that saw her over the finish line. Overall, she produced a total of 10 aces and 33 winners

“Against Elena it’s really important to serve well because she’s serving really well. It’s really tough to do something on her serve,” Sabalenka reflected during her press conference. “I’m really happy with the third set, in the last two games, I was dominating. I kind of put her under pressure. I was staying aggressive. I was following my game.”

Sabalenka got off to a tentative start as both players struggled with their nerves. Exchanging breaks of serve at the start, the second seed looked to be in for a stern test. However, Rybakina’s unforced error count was her undoing throughout the opener. A nightmare service game from the Kazakh enabled Sabalenka to break once again with ease for a 3-2 lead. Towards the business end a deep backhand return granted her two two set points with the Belarussian prevailing on her first opportunity thanks to a double fault from her rival.

A brief interruption to the match then occurred when Rybakina left for a comfort break which did wonders to her game. When she returned the world No.20 was hitting the ball more cleanly as she worked her way to a 2-0 lead at the start of the second frame. However, the roller-coaster continued with Sabalenka hitting back with interest as she eventually levelled 3-3 before dropping serve once again in the following game. Prompting a huge roar of frustration from her. Meanwhile, Rybakina stayed composed to take the proceedings into a decider.

In their two previous meetings Sabalenka was also taken to three sets before prevailing in Wuhan (2019) and Abu Dhabi (2021). To add to the drama this time round there was a confrontation between Rybakina and the umpire over an unreturned serve which was originally called out before hawk-eye ruled it on. However, the official decided not to award the point and instead called for a reply.

Despite the tussle between the two, it was one-way towards the closing stages as Sabalenka won 12 points in a row. Elevating her game, she capitalised on a serious lapse in concentration from her opponent who ended up receiving a code violation for ball abuse. On her first match point she triumphed with the help of a forehand volley.

“In the last game when I was up 30-Love I was almost crying because at that moment I felt like everything was going well. I was a few points from my first personal goal in the Grand Slams,” she said.

Whilst she has won 10 WTA titles during her career, Sabalenka has previously struggled when it comes to playing in major events. In fact, before this year’s Wimbledon she had only reached the fourth round of a Grand Slam once before.

“This is not my final goal. I’m trying to be happy but at the same time be focused and be ready for the next one because it’s also not an easy match,” Sabalenka stated.

The 23-year-old faces a stern test next against a resurgent Ons Jabeur who has already scored wins over Garbine Muguruza and Iga Swiatek in the tournament. She is the first Arab woman in history to reach the last eight of Wimbledon. Sabalenka is tied at 1-1 in their head-to-head but won their most recent meeting earlier this year in Abu Dhabi.

“I‘m not really actually thinking to be honest about this quarter-final. I’m just trying to focus on my game and think about what I have to do tomorrow to win that match.” She concluded.

Sabalenka could exit Wimbledon as world No.1. Although to do so she needs to win the title and Ash Barty must lose her quarter-final match.