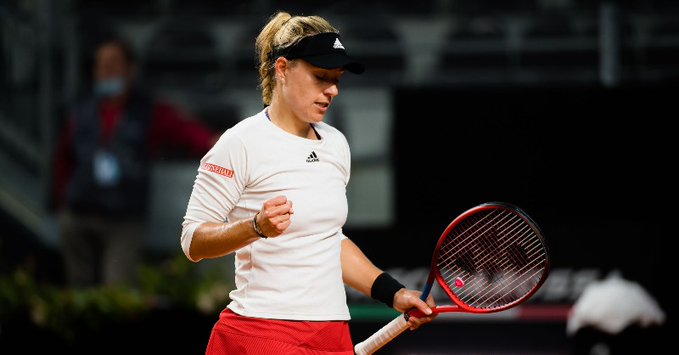 Former world No.1 Angelique Kerber admits that she is unable to pinpoint the exact reason behind her shock first round loss at the French Open on Sunday.

The world No.27 fell 6-2, 6-4, to Ukranian qualifier Anhelina Kalinina who had only ever won one main draw match in a Grand Slam prior to the tournament. Kerber produced 27 unforced errors which were five less than her rival. However, she struggled behind serve where she won just 45% of the points. Kerber has now failed to win back-to-back marches in three out of her past four tournaments played.

Speaking to reporters after the match, the candidly speaking German admitted that she ‘doesn’t know’ why she was unable to play at the level which she would have wanted. Despite being a two-time quarter-finalist at Roland Garros, she has now lost in the first round of the tournament three years in a row. Overall, she has made 14 appearances in Paris and recorded 17 main draw wins.

“I don’t know. I think I had a late start (to the match), especially because I started to play better in the second set,” said Kerber.
“I think she played good. I was not able to play my best tennis or like how I practiced in the last few days. I think I have to accept that and look forward to the next challenge.”

Since lifting her third Grand Slam title at the 2018 Wimbledon Championships, Kerber has only managed to reach the second week of a major in three out of 10 attempts. Two of those were at the Australian Open and one at the US Open.

Fortunately for Kerber her next challenge will be on the grass where she has enjoyed success. She has won more matches at Wimbledon than any other Grand Slam so far in her career.

“Now I will try to learn from the match now because I played good the last few weeks and I had good matches,” she reflected.
“I had the best preparation I could do in the last few weeks on clay but it’s fine.’
“I’m looking forward to Wimbledon for the grasscourt season, and it sounds much better for me. So I’m happy that the next Grand Slam is on grass.”

As for Kalinina, she will face former Australian Open semi-finalist Danielle Collins in the second round.

‘Hopefully The More I Play, The Better I Get’ – Naomi Osaka Ousts Tig In French Open Opener