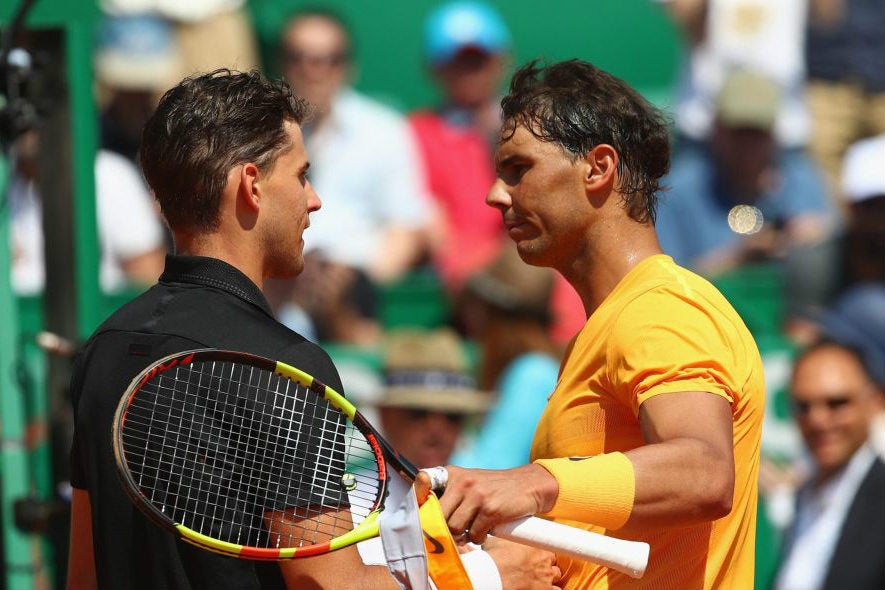 Dominic Thiem broke into the party at last year’s U.S. Open.
But Rafa Nadal came right back with his answer in the moved-back French Open and Novak Djokovic opened this year by winning the Australian Open.
And, suddenly, everything looked okay for the old-timers on the men’s tennis pro tour.
But is it?

IS EVERYTHING OK FOR OLD-TIMERS?

Sure, Nadal came through again on Sunday to do his part for the old-timers by out-lasting young Greek Stefanos Tsitsipas in the Barcelona final, taking his 12th title there on a court named in his honor.

It isn’t that Nadal looks tired or anything, except maybe in allowing Tsitsipas to come back from two sets down in the Australian Open and then looking un-Nadalish in a loss to Russian budding superstar Audrey Rublev in the Monte Carlo tournament.

Just this past week, Russian tour rookie Aslan Karatsev pushed Djokovic all over his home court in Belgrade in the Serbia Open.

And, of course, no one probably remembers when Roger Federer was last seen in a showcase situation.

So, maybe it is time to worry about the old-timers, 39-year-old Federer, 34-year-old Nadal and 33-year-old Djokovic.

If Nadal and Djokovic can hold off the new crowd through the French Open and Wimbledon, that might be about the best that fans of the old-timers can hope for.

These young  guys (Medvedev, Thiem, Tsitsipas, Zverev and Rublev, Nos. 3-7, respectively) occupy  the last five places in the top seven positions in the latest world rankings, with old-timers Djokovic and Nadal serving as guides at Nos. 1 and 2, respectively.

Of course, you can’t overlook Matteo Berrettini and 19-year-old Jannik Sinner, a pair of Italians that appear capable of joining the “Russian Trio” in dominance of the tour, with help from Thiem, Zverev and Tsitsipas.

In the case of Nadal, fans never knew when to relax, sort of like the Los Angeles Dodgers who have gone from “Wonder Men” to “Wonder What’s Next Men” during the past 10 days of major league baseball in the United States.

The Dodgers were up 7-1 late in a game and end up losing in extra innings to the San Diego Padres? Of course, Nadal failed to close out Tsitsipas while holding a 5-4 lead and two match points in the second set in the Barcelona final. After that, fans were never quite sure of how  famous-finisher Nadal might end up against the fiery, hard-hitting, highly athletic 22-year-old Greek.

TSITSIPAS MAY BE BIGGEST CHALLENGE

Although Rublev manhandled Nadal in the Monte Carlo quarter-finals, it now appears that Tsitsipas might be Nadal’s biggest challenge to overcome in winning a 14th French Open title. Yes, even ahead of Djokovic, who appeared to run out of gas against the steady, big-hitting Karatsev.

A year from now, we may be talking about Karatsev in the same breath as Thiem, Medvedev, Rublev and Tsitsipas.

As for the “Big Three” old-timers whose combined age of 106 is nine years more than that of the quartet of the possible future “Best Four” of Thiem, Medvedev, Rublev and Tsitsipas.

Yes, the upcoming French Open is critically important to the immediate future of Nadal, and maybe Djokovic. Go three steps further to Wimbledon, the U.S. Open and next year’s Australian Open, and the top of men’s tennis might have an entirely different look from the current one.

James Beck’s columns are available on the Charleston (S.C.) Post and Courier newspaper’s web-site at postandcourier.com. He can be reached at Jamesbecktennis@gmail.com.