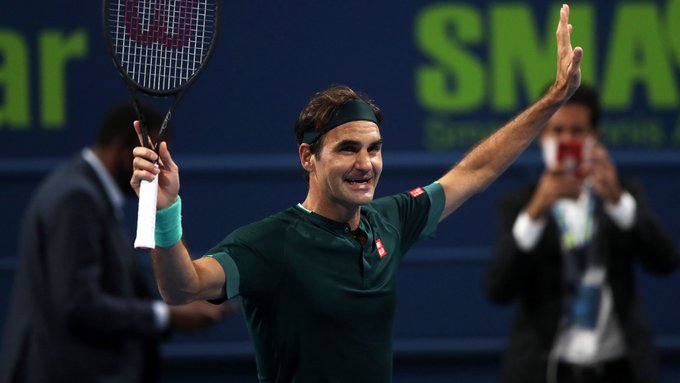 Roger Federer edged past Dan Evans 7-6(8) 3-6 7-5 in Doha to reach the quarter-finals in his comeback match.

The Brit showed high-quality to tennis to test the 20-time grand slam but Federer ultimately prevailed.

Federer will now play Nikoloz Basilashvili in the quarter-finals.

In the first set there was little to separate the two players with Evans using his slice and power shots well against Federer.

On paper, this match was a good match for the second seed to start with as Evans plays an extremely similar game to Federer with also the fact that the Brit practiced with Federer for a couple of weeks in Dubai.

This showed as Federer was able to dictate points well and hit aggressively early in the rally with relative success.

However in the longer rallies, Evans was able to force some errors with good construction of points.

Nothing to separate them and no break points created, a first set tiebreak was played out to decide the winner of the opening set.

Despite being a mini-break down and missing simple shots, Federer rallied back and took the tiebreak 10-8.

The 39 year-old was clearly enjoying himself as he smiled even when missing some easy shots.

However the smile didn’t last long as Evan’s consistent high-quality tennis got its rewards in the second set.

Federer’s rustiness was telling as some routine unforced errors handed the Brit the momentum to take a 4-1 lead.

Some good angles mixed with accurate serving saw Evans thrive on this occasion as he relished playing one of the greatest players of all time.

The world number 28 didn’t concede his lead as he took the second set 6-3 and forced a deciding set.

In the final set, there were some high-quality rallies with some brave passing shots and decision-making from Evans.

This was now a test of Federer’s ability to craft his best tennis when it mattered as it was clear that the Swiss was not at his free-flowing best.

A massive serve and volley at match point down showed Evans’ confidence as he brought his best tennis.

Eventually though, Federer would create the break needed to seal the match as a backhand down the line sealed the win in 2 hours and 26 minutes.

After the match Federer added to perspective to the last 14 months and praised Evans’ performance, “Happy to be standing here regardless whether I won or lost,” Federer explained.

“Obviously winning feels better, but it was a great match. Dan played a good math too and he’s been a wonderful training partner with me over the last two weeks. We played over 20 sets. It was great fun and thank you for the people to come out and that was very special.”

A match that was much-needed for Federer to test his ability and slowly get back into the swing of things in a high-quality match.

A much easier match awaits in the quarter-finals as he takes on Nikoloz Basilashvili tomorrow.