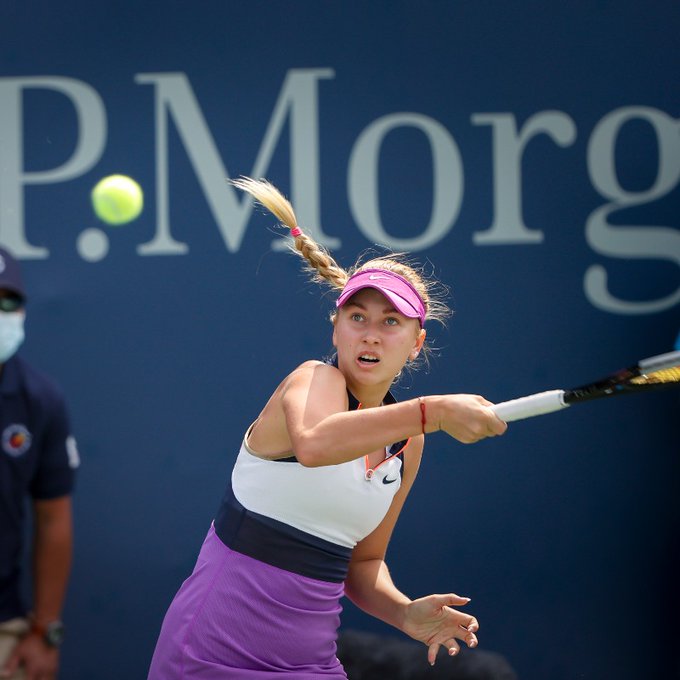 Potapova raced out to a 5-0 lead with a two consecutive breaks in the second and fourth games. Bencic saved two break points to hold serve in the sixth game, but Potapova served out the first set on her second chance.

Bencic broke serve in the sixth and eighth game of the second set. Seven games of the third set featured a double fault. Potapova saved three break points in the second game. The decider went on serve until the 11th game when Potapova converted her third break point to take a 6-5 lead. She converted her second match point with a winner down the line.

This year’s Australian Open quarter finalist Jessica Pegula took down 2015 Dubai finalist Karolina Pliskova 6-0 6-2. Pegula scored her second win over Pliskova this year one week after beating her Czech rival 6-3 6-1 to reach the semifinal her first WTA 500 semifinal in Doha.

Pegula becomes the seventh player to take a bagel win set over Pliskova in a WTA main draw match.

Pegula raced out to a bagel win in a 20-minute opening set, where Pliskova won just 10 points in the first two games.

Pliskova started the second set with a break in the first game , as Pegula committed six of her eleven unforced errors. Pegula reeled off six consecutive games to win the second set 6-2.

Aryna Sabalenka knocked out Anett Kontaveit 6-3 6-2. Sabalenka broke three times in the fourth game of the first set and in the third and seventh games of the second set. Elise Mertens knocked out Caroline Garcia 6-4 6-2. Both players traded breaks in the fourth and fifth games of the opening set. Mertens won four games in a row with two breaks in the fifth and seventh games and held on her next two service games to claim the first set 6-4. The second set started with a trade of breaks. Mertens reeled off five of the next six games with breaks in the third and fifth games to close out the second set 6-2.