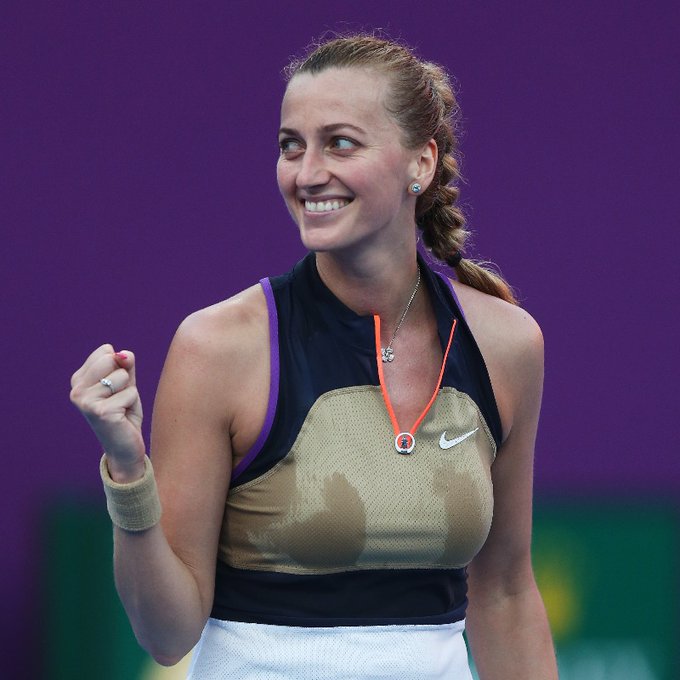 Two-time Wimbledon winner Petra Kvitova edged past Anett Kontaveit 6-3 3-6 6-2 in 1 hour and 46 minutes to become the first semifinal at the Qatar Total Open in Doha.

Both players reached the quarter finals this week without dropping more than five games in any match.

Kvitova went up a double break to race out to a 5-1 lead in just 19 minutes. Kontaveit pulled one break back in the eighth game to get back on serve to 3-5, but Kvitova sealed the first set 6-3 with her third break at love in the ninth game.

The second set started with a trade of breaks in the first two games. Kontaveit got two consecutive breaks to build up a 5-2 lead. Kvitova pulled back one break on her third chance for 3-5, but Kontaveit closed out the second set with her fourth break.

Kvitova came through three deuces before breakinng Kontaveit in the first game of the decider. The Czech star went up a double break in the third game at deuce to race out to a 3-0 lead. Four consecutive breaks followed in the next games. Kontaveit pulled one break back in the fourth game. Kvitova earned her third break to race out to a 4-1 lead. Kontaveit got one break back at deuce in the sixth game for 2-4, but Kvitova won the final two games with her fourth break to close out the third set 6-2.

Kvitova has improved her lead to 5-2 in her seven head-to-head matches against Kontaveit.

The Czech player won the Doha title in 2018 and finished runner-up to Aryna Sabalenka in 2020.

“I am really glad that after losing the second set, which I probably didn’t play the best, I started very well in the third set. I learned that the return was pretty good from my side. I was going for it. First point, first shot, and I think that made a big difference. In the rally, It was 50-50 and anybody could win, but when I put the pressure from my return, it was really very nice”, said Kvitova.

The former world number 2 set up a semifinal clash against this year’s Australian Open quarter finalist Jessica Pegula, who cruised past Karolina Pliskova 6-3 6-1. Pegula broke twice in the third and ninth points to win the first set 6-3. Pliskova started the second set with an immediate break, but Pegula broke three times in a row to claim the second set 6-1.