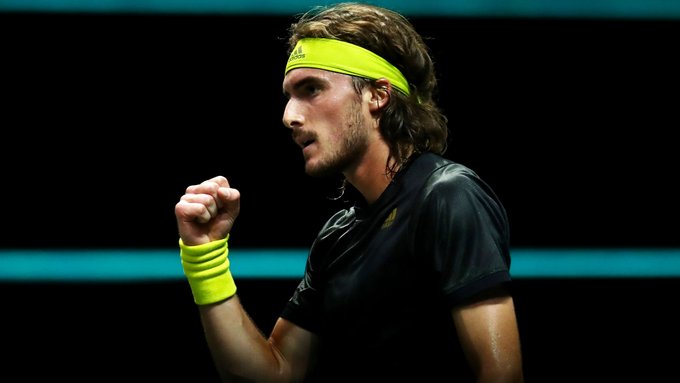 Stefanos Tsitipas is through to the quarterfinals of the ABN AMRO World Tennis Tournament in Rotterdam after being made to work to beat the Pole Hubert Hurkacz in three tight sets 6-4,4-6, 7-5. Tsitipas hit 26 winners in the match while the Pole hit 28 unforced errors in the loss.

The first set was pretty routine for both players and we saw some intense long rallies and we knew this match was going to be a thrilling blockbuster. We didn’t see a breakpoint until 5-4 with the world number 30 serving to stay in the set and was put under pressure once again when he hit three straight errors to give the Greek three set points.

He would go on to break winning a gruelling rally finishing the point and the set with a huge smash at the net. The second set was much of the same and at 3-3 we saw a fightback from Hurkacz who was determined to stay in the match and managed to earn his first two breakpoints of the match.

He would break the Greek serve with a sensational backhand winner to take a 4-3 lead and would take the second set sealing it with a volley winner.

The third and final set was an all time battle between two young guns matching shot for shot and it was unfortunate that there were no fans in the stands or they would be on their feet cheering.

At 5-4 Tsitsipas had a chance to break but it was quickly saved by the big serve of the Pole who was keen to stay in the match. Once again at 6-5 the Greek reached match point but it was saved by the quick work of the world number 30.

The world number six set up another match point with a scintillating one hand backhand down the line and finished with a huge “come on”. He would finish the match in style with another big forehand winner to take the match.

After the match he acknowledged his opponent’s fighting qualities in an on court interview .

” Hubert is a very tough competitor we have played loads in the past and every single time I go out on the court I know what to expect, he’s a fighter, he doesn’t like to give up so it always makes for a difficult opponent I think overly I played really well, we both played a high performance of tennis and didn’t give many break opportunities, pretty good serves from both sides and I’m really glad that I fought so hard till the very end, it was exhausting but it paid off”

He will next face Karen Khachanov in the quarter finals on Friday.

Benoit Paire Under Fire For Spitting, Tanking And Mocking Rules At Argentina Open