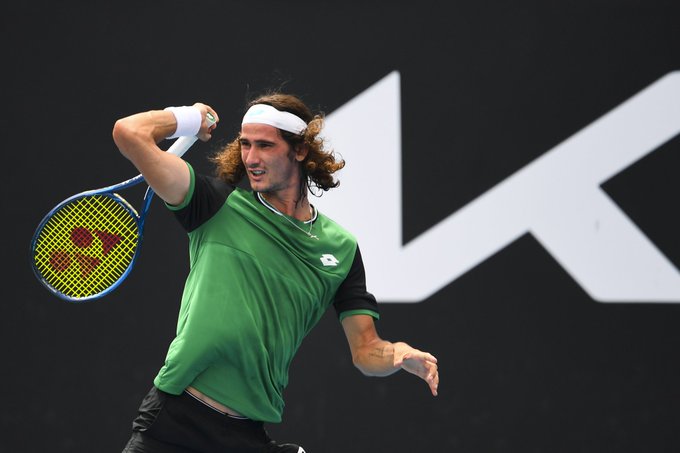 The South African cinderella story continues as he pulled off his third consecutive upset.

Lloyd Harris is the first qualifier in ATP history to reach the final of a 500 tournament after coming back once again to stun the world number 12 Denis Shapovalov in three sets 6-7, 6-4, 7-6 in a match that lasted two hours and 40 minutes.

Harris fired 12 aces and 28 winners in the match while the Canadian hit a massive 41 unforced errors in the loss as he is now 1-10 in ATP semi-finals.

“I don’t have many words right now, I’m super happy of course that win, being a set down, 4-2 down is mentally and physically was a little bit troublesome for me, I kinda found my best tennis from there so I am extremely happy with the result right now”

This is Harris’ third scalp as he had previously beat the number one seed Dominic Thiem and pulled a similar comeback last night vs Kei Nishikori before beating Shapovalov to reach the final.

The first set was pretty routine for both players and at 4-3, the South African called for the trainer and took a medical timeout to have his right thigh taped after pulling up in some discomfort.

He was also given pain killers to be able to continue to play and it seemed to work as he soildered on and the first set would be decided by a tiebreaker. The world number 81 got out to an early lead in the breaker but it didn’t last long and it went back and forth.

Leading 3-1 Harris would hit two consecutive errors to level it at three but managed to respond to regain his two point lead at 5-3. The world number 12 would bounce back to win the next four points to take the breaker and the set.

The Canadian took the high of winning the first set feeling he was one set away from the final and at 1-1 he got the first three breakpoints of the set but the South African did a good job saving them all.

He would hold serve but the world number 12 kept pushing and finally broke through to take a 3-2 lead and consolidate the break. The world number 81 was determined to stay in the match and at 4-3 earned his first breakpoints of the set and would break when the Canadian served a double fault to level the set at four.

At 5-4 Harris would have two chances to break and take the set, on the first one he was denied with an ace but on the second one the Canadian’s served cracked under pressure and he served another double fault to send the match into the decider.

We didn’t see a break of serve in the entire third set and the match would be decided by a tiebreaker. It was as tight as it could get with both players trading breaks back and forth and at 6-5 the world number 81 had his first match point.

He would once again be denied by the world number 12 but after winning the next point on his serve he would claim victory as Shapovalov’s final backhand just sailed out.

After the match he spoke about the win and he was very elated to be playing in another final.

“I mean this is what I am working for, this is what I am putting in the hard yards for, I’ve been kinda waiting for results like this so to have many of them in one week is a fantastic feeling and now I got one more match to go”.

He will face a Russian in the final on Saturday either Andrey Rublev or his Russian compatriot Aslan Karatsev.