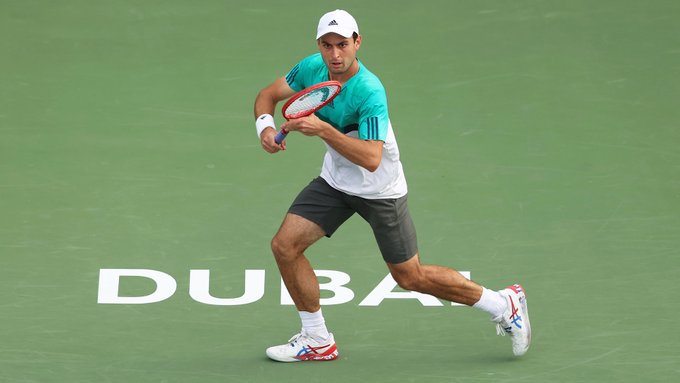 This year’s Australian Open semifinalist Aslan Karatsev beat his competriot Andrey Rublev 6-2 4-6 6-4 after 2 hours and 12 minutes in an all-Russian semifinal at the Dubai Duty Free Tennis Championships. Karatsev has extended his win-loss record to 11-2 this year.

Rublev saved two break points in the third game to hold serve at deuce, but Karatsev broke serve twice in the fifth and seventh game to win the first set 6-2.

Karatsev earned six break points in the third game of the decisive set and broke serve to take a 2-1 lead, as Rublev committed a double fault.

Karatsev has become the first wild-card to reach the Dubai final since Thomas Muster in 1997.

Karatsev and Harris are bidding to become the fourth first-time winner on the ATP Tour after Daniel Evans at the Murray River Open, Alexei Popyrin in Singapore and Juan Manuel Cerundolo in Cordoba.

“It was a really tight match against a tough opponent. It was an unbelievable performance from Andrey. He did not lose a match at an ATP 500 in one year. Everything was decided in one or two points. I feel happy. I will prepare myself mentally and physically, and we will see what happens tomorrow. I know Lloyd is a good player with experience”, said Karatsev.