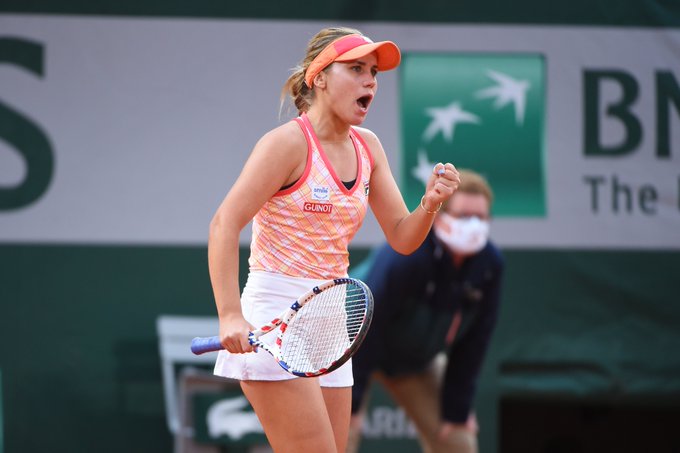 Sofia Kenin produced an impressive performance to beat Petra Kvitova 6-4 7-5 and advance to her second Grand Slam final at the 2020 French Open.

The American, 21, beat Ashleigh Barty and Garbine Muguruza in successive rounds to claim the Australian Open in January. But she has had to work hard to reach the same stage at Roland Garros. She has needed three sets to defeat four of her six opponents so far.

“Kvitova’s such a tough player,” Kenin said in her on-court interview. “She’s got a great aggressive game and a huge serve. So I knew I needed my bring my A game to win and I’m super-proud of myself (that I did that).”

Kenin made a very strong start to the match. She played high-class tennis to establish a 4-1 lead after just 12 minutes.

However, Kvitova dialled up the aggression and hit a couple of winners to get one of the breaks back. She then battled hard in the next two games. Unfortunately for the Czech, she did not manage to break again and the American stayed ahead at 5-3.

Although Kvitova then held to love to apply pressure, Kenin held her nerve to get through a tough service game and clinch the first set.

The second set mostly hinged on three crucial games which could have gone either way. In the first, Kenin saved a break point to make it 2-2.

In the second, the American dragged Kvitova around the court cleverly to take the game to deuce. Then she hit a winner on break point to seize the advantage.

In third critical game, the Czech really should have broken. She had three chances to do it but she failed to put enough pressure on Kenin’s serve and the World No.6 eventually held to move 4-2 ahead.

The American suffered a brief lapse in game ten when she made three unforced errors to hand the Czech a break. However, Kvitova wasted her lifeline. She missed far too many first serves in the next game and Kenin punished her by breaking again to move to within one game of victory.

The final game summed up a frustrating afternoon for the World No.11. She earned her 12th break point of the match with a scintillating forehand winner. Then she wasted it by making three consecutive unforced errors which handed the American the win.

Break points are always vital in any tennis match. But they could be particularly important when Kenin takes on Iga Swiatek in the 2020 French Open final.

The Pole has returned brilliantly throughout the tournament, so if she earns and takes enough break points against the American, she has a great chance of victory.

On the other hand, if Kenin can restrict the number of opportunities Swiatek has on her serve, and save most of the break points she faces, then her chances of winning will increase dramatically.