Tennis Returns: WTA Sets Out Desire To Go To China, But ATP Not So Sure - UBITENNIS 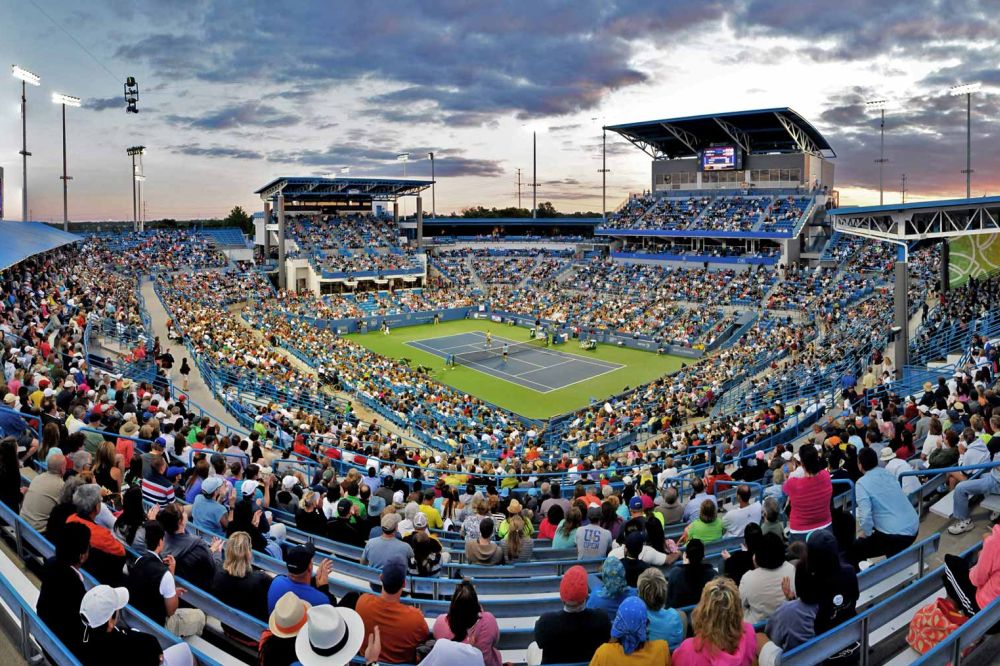 Professional tennis will resume on August 3rd with the WTA set to play their first tournament a week before the men’s tour.

Both organisations have published their provision schedules at 15:00 on Wednesday afternoon to coincide with the USTA hosting their virtual press conference concerning the upcoming US Open. On the WTA Tour, the Italian city of Palmo will be where the Tour will resume. The clay-court event will take place two weeks prior to the start of the Western and Southern Open, which will also take place at the same venue as the US Open this year. A total of 20 tournaments is set to take place before the year concludes.

“Having assessed the global outlook for travel in the latter half of the year, working with our medical experts on providing the safest environment possible, and working through the diverse operational challenges for running events safely in the context of COVID-19, the WTA is pleased to release a calendar for the remainder of the 2020 season,” WTA Chairman Steve Simon said in a statement.
“For now, the vital energy of spectators in stadiums will be greatly missed, but our athletes are eager to return to competition and our broadcast and social media partners are exploring new ways to engage with our fantastic fans. It is our sincere hope and desire that we will be able to return to play this summer.”

The provisional schedule also includes the Asian Tour, which the men’s governing body is yet to commit to. Officials are hoping to stage events across China, which include the city of Wuhan. A city where the COVID-19 outbreak is said to have originated from. The WTA Finals are also set to go ahead in the country during the week commencing August 23rd. 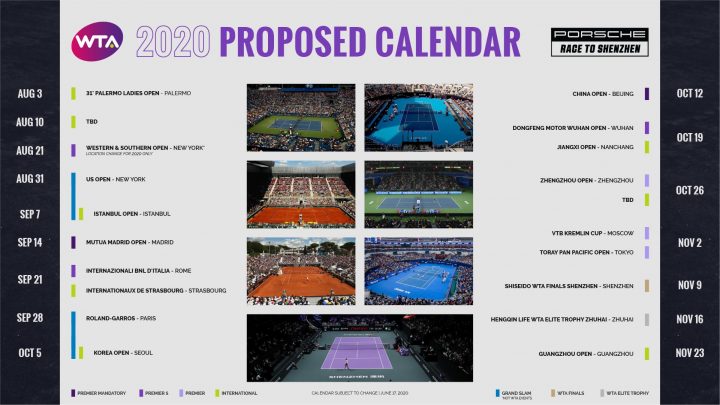 On the men’s Tour they have published a more specific schedule that goes up only until the end of September. At present only seven events have been named on their schedule with four of those taking place on the clay. Washington and Kitzbuhel are the only men’s event that has been given the green light. However, the ATP confirms others could be added ‘should circumstances allow’ them to do so.

“Our objective has been to reschedule as many tournaments as possible and salvage as much of the season as we can,” said ATP chairman Andrea Gaudenzi. “It has been a truly collaborative effort and we hope to add more events to the calendar as the situation evolves. I would like to recognise our tournaments’ efforts to operate during these challenging times, as well as our players who will be competing under different conditions. At every turn, ensuring that the resumption of the Tour takes place in a safe environment will be paramount.”

The ATP is set to provide a final decision regarding the last quarter of the 2020 season by mid-July with hopes that the ATP Finals in London will be hosted as usual. Although the prospect of a crowd being at that event will be subject to government approval.

As for the ATP Challenger Tour, it will resume from the week commencing August 17th in line with the International Tennis Federation and their tournaments.

The reviewed schedules have been drawn up following a collaboration between the WTA, ITF, USTA and FFT. 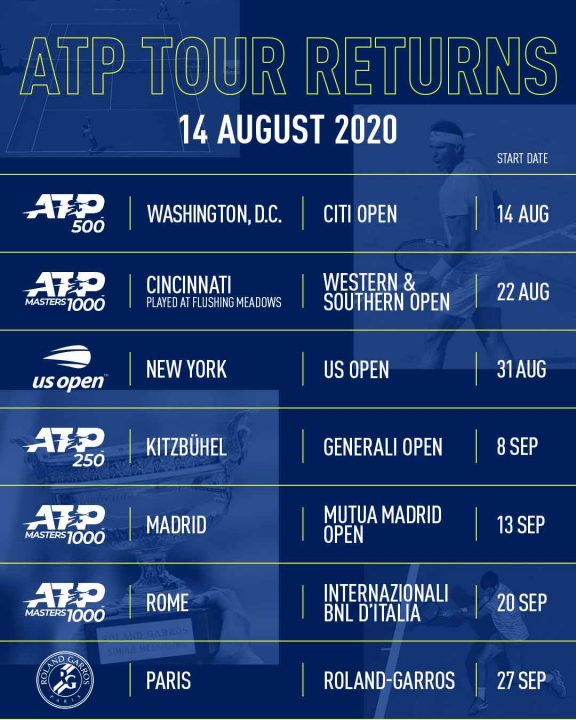 Tennis Can’t Be About Black Or White