Who Is Sitting In The Royal Box On Manic Monday? - UBITENNIS

There is a theme of golf occurring at the Wimbledon Championships on Monday with a series of stars from the sport in presence.

The Royal Box on Center Court, which features matches such as Roger Federer against Matteo Berrettini, features Sergio Garcia, Tommy Fleetwood and Ryder Cup captain Thomas Bjorn. The 74-seat Box has been used for the entertainment of friends and guests of Wimbledon since 1922. Guests are given a direct invitation from the chairman of The All England Club. 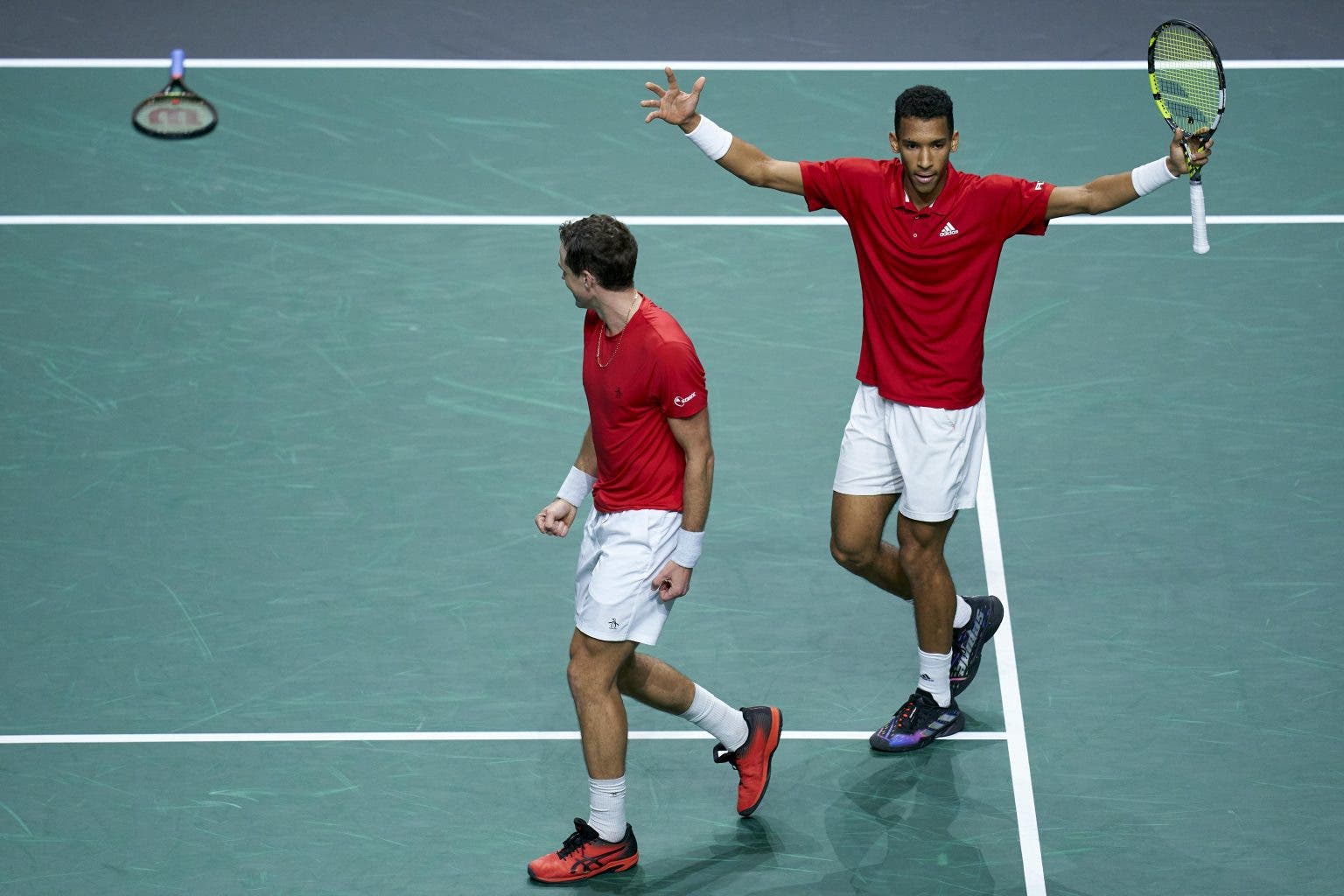 Canada reached the Davis Cup final for the second time in three years after beating Italy 2-1 in the semifinal in Malaga.

Felix Auger Aliassime earned a 6-3 6-4 win over Lorenzo Musetti to draw level to 1-1 before teaming up with Vasek Pospisil to defeat Fabio Fognini and Matteo Berrettini 7-6 (7-2) 7-5.

Shapovalov won the first nine points of the match to take a 2-0 lead with a break in the opening game. Sonego won three consecutive games to take a 3-2 lead with a break-back in the fifth game. Shapovalov saved two break points in the sixth game to hold serve at deuce for 3-3. Sonego fended off two break points in the seventh game for 4-3. Sonego earned two mini-breaks on the second and sixth points to race to a 5-1 lead. Shapovalov clawed his way back by winning three points for 4-5. Sonego earned two mini-breaks to seal the tie-break 7-4, when Shapovalov sent a forehand long after 1 hour and 10 minutes

The second set went on serve until the 10th game, when Shapovalov earned three consecutive set points at 4-5 0-40 on Sonego’s serve. The Italian player saved five set points to hold serve at deuce for 5-5 and sent the second set to the tie-break.

Sonego won four consecutive points from 1-2 down to take a 5-2 lead in the tie-break. Sonego missed a drive volley to set up a match point. Shapovalov won his fifth consecutive point to seal the second set to send the match to the decider.

Sonego earned the decisive break in the 10th game to close out the match after Shapovalov made three double faults.

“It’s an unbelievable moment for me. Shapovalov fights non-stop. I had to be focused on every point and I needed the help of all my team. This is just a great moment for Italy. It was really tough to remain focused because I lost the tie-break in the second set, but I was really positive and my captain helped me a lot to do my best to stay in the match and I enjoy the match until the last moment for me. It was a really tight match and a big win and a big win. It was an amazing win for me and for my team”, said Sonego.

Auger Aliassime earned his first break in the sixth game to open up a 5-2 lead and held his next service games to seal the first set 6-3 with an ace after 39 minutes.

Musetti held his serve after three deuces to hold serve in the first game of the second set. Both players held serve until 4-4. Musetti saved the first break point in the ninth game with a service winner, but Auger Aliassime converted his second chance with a down the line winner. Musetti went up a 0-30 lead on Auger Aliassime’s serve in the 10th game, but the Canadian player hit three service winners to serve out the match 6-4 keeping Canada’s hopes of reaching the final alive.

“It’s sad, because it’s the second time in a row that I have the chance to bring Italy to the final. I played until the last point, and Felix played better than me. he deserved to win”, said Musetti.

Canadian captain Frank Dancevic made a late change to the doubles line-up, calling up Auger Aliassime to team up with Vasek Pospisil.

Berrettini and Fognini converted their second break point in the third game to take a 3-1 lead. Auger Aliassime and Pospisil broke back on their third opportunity in the sixth game to draw level to 3-3. Both teams went on serve setting up a tie-break. Auger Aliassime earned two mini-breaks to win the tie-break 7-2.

Berrettini and Fognini went up a break in the second game to take a 2-0 lead. Auger Aliassime and Pospisil broke back in the third game after two double faults from Fognini to draw level to 2-2. Both players went on serve until the 11th game when Auger Aliassime and Pospisil earned the decisive break on their third opportunity to take a 6-5 lead. The Italian team wasted two break-back points at 5-6 in the 12thgame.  Auger Aliassime delivered two first serves to get to deuce with an ace and a winner and won the final four points to secure their spot in the final.

Felix Auger Aliassime: “That’s the good thing about having many good players on the team. I feel like Denis and Vasek played really well yesterday to come back and win, but Denis had a long match, and we knew coming this week that we could make some changes depending on how singles went. I feel like the whole team connected around this idea and there was no ego in the wrong place. Everybody just has the clear idea of the main goal, which is lifting the cup tomorrow”.

Canada improved their lead against Italy to 3-0 in the three head-to-head matches after wins in 2013 and 2019.

Canada is one win away from a historic first Davis Cup title.

Canada set up a final against Australia, who reached the Davis Cup final for the first time in 19 years after a 2-1 win over Croatia on Friday.

Australia holds a 9-1 lead against Canada. Howevr the Canadian team earned a win in their last match at the 2019 Davis Cup match.

“Making the finals is always an amazing feeling, and I really believe in the team. We have done it before. We are here again and I believe we can win this, so we are going to go after it tomorrow and give it all we have got”, said Frank Dancevic.