Berrettini Stops Seppi In A “Mat” Versus “Andy” Battle - UBITENNIS 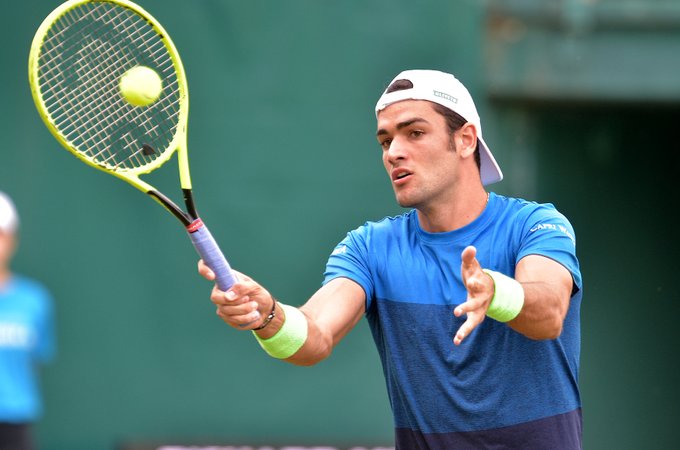 It was the first Thursday match on the Noventi Open Stadion court, but it could have easily been played at Foro Italico in Rome. Matteo Berrettini took on Andreas Seppi in a second round contest at the ATP 500 championship played in Halle, Germany.

As is always the case with matches between countrymen, there were a collection of appealing back stories to tell. Starting from the top, it was a classic “young player versus veteran” battle as the 23-year-old Berrettini faced Seppi, who turned 35 in February. It featured two individuals who are basketball player tall, given that Berrettini is 6’5” and Seppi is 6’3”. The similarities continued, as both are right-handed, hit two-handed backhands and absolutely pummel their ground strokes.

They put on a dazzling show, taking full advantage of a court that provided “sit up and hit it” playability on shots that were attempted from the middle of the lawn. Those that travelled close to the sidelines slowed, then skidded. The overall conditions resulted in an array of exchanges that were often quick, and pulsating. A sprinkle of occasional, deft and feathery dropshots were tossed into the mix (shots that just cleared the net before abruptly coming to a stop near one of the alleys)

“ATP Matchfacts” once again becomes the bible story for the match, but the stats really do little to enlighten anyone who didn’t actually watch what took place. Seppi put together workable service numbers notching four aces, along with three double faults. Berrettini, who regularly clocked serves in the plus 125 MPH range, blazed twelve aces against one double fault. More important, he converted three of five break point opportunities that came his way, while his opponent enjoyed a one for three success rate. In the final count, Berrettini earned 88 of the 157 points played (56%). Seppi claimed 69 points which equalled 44%.

Last week, Berrettini was on his game taking the Stuttgart title without losing a set. In April, he won Budapest. Adding to the home country flavour, he played Halle for the first time in 2018 and lost to, none other, than Seppi, 6-3, 7-5 in the first round.

Seppi was born in Bolzano, Italy but now resides in a city with a magically lyrical name – Caldaro sulla Strada del Vino – which is in Italy’s South Tyrol. An individual who appreciates contrasts, his favourites surfaces are clay and grass. His last choice speaks to the success he has had playing on it. Prior to meeting Berrettini, his career grass court record was 58-43. In Halle, he was 12-8, including a final round appearance in 2015 where he dropped a 7-6, 6-4 decision to Federer.

Berrettini comes from Rome, but now calls Monte Carlo home. Hard court is his favorite surface, but he was 7-3 on grass before meeting Seppi. Adding to his profile, he has a younger brother, Jacopo, who is a 20-year-old touring professional, who stands Seppi height (6’3”).

In the quarterfinals, Berrettini will face Karen Khachanov, the No. 3 seed. The Russian is the same age as the Italian and an inch taller (6’6”). They have played twice, both in 2019. On indoor hard court, in February at the Sofia Open, in Bulgaria, Berrettini was 6-7, 6-3, 6-4 better. A week ago, in Stuttgart, he triumphed again, 6-4, 6-2. Both victories took place in the round of 16.

In a repeat of Thursday’s scheduling, Berrettini will return to first match Noventi Open Stadion status against Khachanov…and it promises to be quite an exhibition as was today’s.